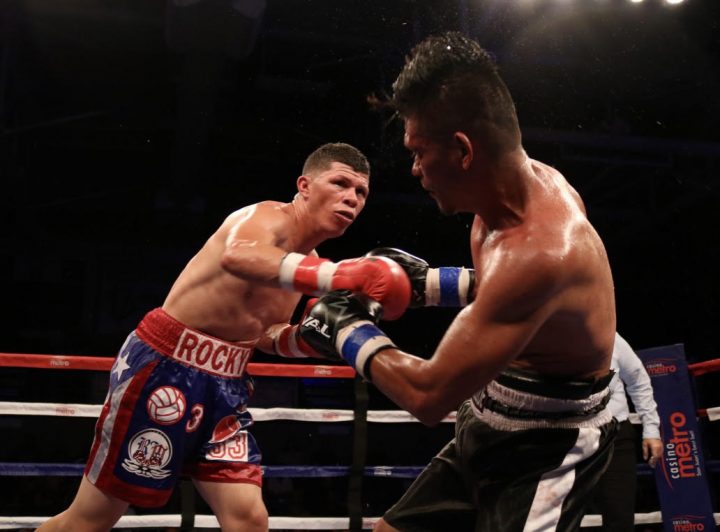 By Mark Eisner: Making a comeback after three years out of the ring, former three-time WBO super featherweight champion Roman ‘Rocky’ Martinez (30-3-3, 18 KOs) looked sensational in beating journeyman William Gonzalez (30-11, 26 KOs) by an eighth round knockout in a scheduled 10 round fight on Friday night in the lightweight division at the Rubén Zayas Montañez Coliseum in Trujillo Alto, Puerto Rico.

Making his first appearance since being stopped in the fifth round by Vasiliy Lomachenko on June 11, 2016, Rocky Martinez, 36, knocked the hard hitting replacement opponent Gonzalez down in the eighth round. The referee then stepped in and halted the fight. The official time of the stoppage was at 1:03 of round eight.

Martinez was too much for the over-matched Gonzalez, and it’s not surprising. There was a huge difference in pedigree between the two fighters. The 38-year-old Nicaraguan Gonzalez came into the fight having lost his last four fights, and he wasn’t going to do much against a former world champion like Martinez.

If Martinez returns to the super featherweight division, he’s got some excellent fights available to him against WBC champion Miguel Berchelt, WBA champion Gervonta ‘Tank’ Davis, WBA ‘regular’ champ Andrew Cancio and IBF champion Tevin Farmer. Those are good paying fights for Martinez, but also ones that’ll be hard for him to win. Martinez’s chances of success against Tank Davis, Farmer and Berchelt obviously wouldn’t be good, but he might have enough power and talent to defeat Cancio or WBO champion Masayuki Ito. Those guys look vulnerable right now.

Before his three year layoff, Rocky Martinez had lost to Lomachenko, fought to a controversial 12 round draw against Orlando Salido in September 2015, and beaten Salido by a questionable 12 round decision in April 2015. All three three of those fights were hard ones for Martinez, who took a lot of punishment, especially in his two fights against Salido. In November 2013, Martinez was knocked out in the eighth round by Mikey Garcia. In September 2010, Martinez was beaten by Ricky Burns by a 12 round unanimous decision.

Talented 2012 and 2016 Puerto Rican Olympian Jeyvier Cintrón (10-0 5 KOs) picked up his tenth consecutive victory in stopping an over-matched Eliecer Quezada (22-9-3, 4 KOs) by a first round knockout in a scheduled 10 round fight at super flyweight. #7 WBO Cintron, 24, nailed the 27-year-old Nicaraguan Quezada with a big right to the head that knocked him flat on the canvas. The fight was then halted.

Undefeated super bantamweight Luis ‘Popeye’ Lebrón (16-0-1, 9 KOs) destroyed Jose Alfredo Chanez (6-9, 3 KOs) by a third round knockout in a si in another mismatch on the card. Lebrón, 25, knocked Chanez down four times in the contest. Chanez was dropped three times in round 2, and a final tme in the third. The official time of the stoppage was at 1:29 of round three.