Klimas: Pacquiao-Lomachenko NOT happening [Arum says it could later) 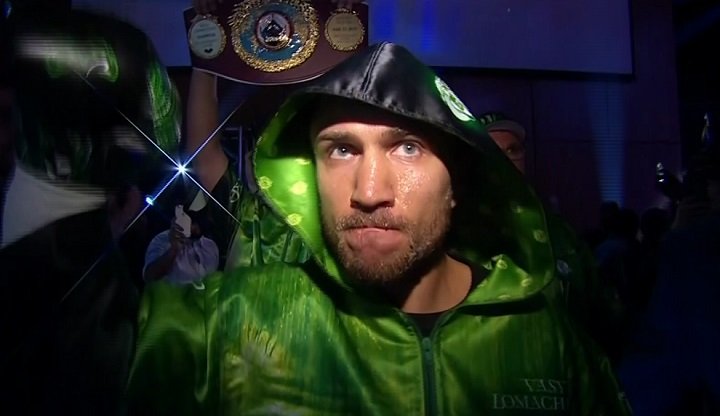 By Chris Williams: Vasyl Lomachenko WON’T be fighting welterweight contender Manny Pacquiao, according to the super featherweight champion’s manager Egis Klimas, who says the weight difference between them is too great for it to be a fight that can realistically happen.

It’s possible that Pacquiao meant that he was planning on starting talks. You’ve got to give Pacquiao the benefit of the doubt. It appears that Pacquiao really wants the Lomachenko fight. Whether Klimas will eventually agree to the fight is the important question.

“There are negotiations now about the No. 1 pound-for-pound, which is Lomachenko,” Pacquiao said to ABS-CBN. “There are still talks on the weight, reducing the weight.”

Klimas also says that the 29-year-old Lomachenko (10-1, 8 KOs) won’t get any credit if he beats the 39-year-old Pacquiao, because he’s an older fight now and not the same guy that he was in the past. However, Lomachenko’s promoter Bob Arum says fight between Lomachenko IS possible, but not in the spring of 2018. Arum sees the Pacquiao-Lomachenko fight as being possible later on. Arum isn’t saying when, but it’s possible that he’ll try and make the Pacquiao vs. Lomachenko fight in 2019 if the Filipino star doesn’t retire in 2018. Not surprisingly, Arum’s plans for Pacquiao are for him to fight the winner of the Jeff Horn vs. Terence Crawford fight, which will be taking place on April 14 or April 21. Arum says Pacquiao could either fight on the undercard of the

Klimas doesn’t seem to understand that Lomachenko would still get a lot of attention from fighting Pacquiao, and he would certainly get a certain amount of credit for beating him. The credit Lomachenko would receive from boxing fans is a lot more than what he received for dragging super bantamweight champion Guillermo Rigondeaux up 2 weight classes to fight him last month on December 9 at super featherweight on ESPN. That looked really bad in the eyes of a lot of boxing fans, as Lomachenko was so much bigger than Rigondeaux. For Klimas to be fine with Lomachenko fighting a smaller guy in Rigondeaux and not OK with him fighting a bigger guy in Pacquiao, it looks like he doesn’t want to put him in a risky fight that he could lose.

According to Pacquiao’s trainer Freddie Roach, he’s really a natural lightweight, who has to eat a ton in order to fight at welterweight. If Lomachenko is willing to move up to 135 to fight Pacquiao, the weigh for the fight shouldn’t be an issue. Klimas seeing the Pacquiao fight as not being worth it for Lomachenko suggests that he might not be willing to put his fighter in risky fights where the outcome is not a given for him. That’s one of the criticisms that Lomachenko has had since he turned pro. He’s only been matched against one fighter where it wasn’t a dead certain win for him, and that was in his fight with Orlando Salido in 2014. Lomachenko lost that fight and looked really bad with all the holding he was doing. Since then, Lomachenko has been matched carefully against fighters that he was a favorite to beat.

“The spring would be too premature, but certainly that’s a fight that might be attractive down the road,” said Arum to ESPN.com in talking about a fight between Lomachenko and Pacquiao.

Arum might need to use his promotional muscle to get Lomachenko and his manager Klimas to agree to take the fight with Pacquiao. For Klimas not to understand how a fight between Lomachenko and Pacquiao wouldn’t benefit his fighter is worrisome. Klimas should be able to see straightaway that matching Lomachenko against a star like Pacquiao would be a huge benefit to his career.

It doesn’t matter that Pacquiao is perceived as a faded star in the eyes of the hardcore boxing fans, he’s still a highly recognizable fighter. Pacquiao is Lomachenko’s best option for him gaining a lot of attention from fans in the U.S and worldwide. That’s the reason why Arum is interested in making that fight. It’s a fight that Arum has the power to make, considering that he promotes Pacquiao and Lomachenko. It’s a match-up that Arum can make in 2018 if he wants. Klimas needs to take this fight for Lomachenko while it’s still available to him. One Pacquiao retires in the near future; there won’t be any big names for Arum to match him against to increase his popularity in a significant manner right away. Putting Lomachenko in with Terence Crawford, Errol Spence, Danny Garcia or Keith Thurman won’t do as much for his career as a fight against Pacquiao.

Klimas says he sees Lomachenko fighting Pacquiao as comparable to him facing middleweight champion Gennady ‘GGG’ Golovkin or light heavyweight belt holder Sergey ‘Krusher’ Kovalev. He feels that it would be that kind of a risky fight for Lomachenko. The reality is that Lomachenko is a huge featherweight, who should be fighting in the 135 pound weight class already. Pacquiao is a natural lightweight, who has shown courage in taking on bigger fighters than himself for the last 10 years of his career. The 5’6” Lomachenko should at least want to face someone his own size in Pacquiao, who is only 5’6 ½”. There’s no difference in size between Pacquiao and Lomachenko. The only difference is hand speed, power, and experience. Even at 39, Pacquiao is faster, stronger and far more experienced at the pro level than Lomachenko.

It wouldn’t be the end of the world if Lomachenko loses to Pacquiao. He already lost to Salido, and he was able to bounce back from that defeat to win world titles at 126 and 130. Lomachenko’s promoters at Top Rank would likely match Lomachenko quickly against one of the lightweight champions to give him the opportunity to redeem himself by becoming a world champion in a 3rd weight division. The hardcore and casual boxing fans would forgive Lomachenko if he comes up short against Pacquiao. After all, Lomachenko doesn’t possess the hand speed or natural punching power of Pacquiao. There’s a big difference in speed and power between the two fighters. Lomachenko will never have the power and speed that Pacquiao has. Lomachenko wasn’t blessed with the same physical tools that Pacquiao was. There’s nothing wrong with that. Pacquiao is just a special fighter. That’s why he’s been able to win world titles in 8 weight classes. Lomachenko likely never be able to accomplish anything close to that, especially if he’s not willing to take risks by moving up in weight.

Lomachenko is rumored to be possibly facing Salido next in a rematch in early 2018. That’s a fight that is no longer as interesting as it would have been had it taken place 4 years ago in 2014 after Lomachenko’s loss to Salido. In Salido’s last fight, he was stopped in the 9th round by Miguel ‘Mickey’ Roman on December 9, 2017. Salido’s career is clearly on the downside. He retired after his loss to Roman last month, and then a week later, he announced that he’s going to continue his career. Salido’s ring record since 2015 is 1-2-1. It’s a terrible record, but that probably won’t prevent Arum from still making the Lomachenko-Salido rematch. The casual boxing fans will still be interested in seeing Lomachenko try and avenge his loss to Salido. If Top Rank markets the Lomachenko vs. Salido 2 rematch on ESPN, they’ll be able to get a lot of viewers to watch it. The fans will probably not have any clue that Salido’s nearing 40, and is looking over-the-hill. If Lomachenko faces Salido next, then Pacquiao could come shortly after that. It’ll be interesting though if Klimas is fine with Lomachenko fighting the soon to be 38-year-old Salido but NOT on board with him fighting the 39-year-old Pacquiao. Salido’s record in his last 4 fights (1-2-1) is far worse than Pacquiao’s. Lomachenko should be willing to face Pacquiao. If Lomachenko is fighting older guys like 37-year-old Rigondeaux and Salido, he should be good with fighting Pacquiao.