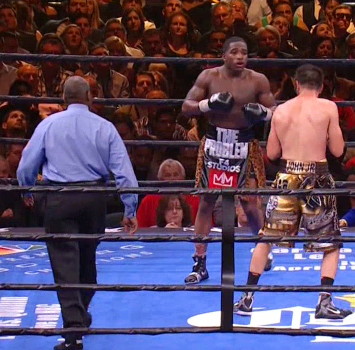 By Scott Gilfoid: Former three division world champion Adrien Broner (30-1, 22 KOs) took care of business last Saturday night in winning an easy 12 round unanimous decision over John Molina in a fight that Broner described as a “cake walk” at the MGM Grand in Las Vegas, Nevada. When interviewed after the fight, Broner said that he’ll be fighting on June 20th in his hometown of Cincinnati, Ohio.

When asked if he’d be interested in fighting Amir Khan, Broner said “I can’t wait. I’d even fight him at Wembley.”

I’m not sure if a Khan-Broner fight would be a big enough fight to be staged in the 80,000 seat Wembley Stadium, but I could see it taking place in the Wembley Arena. It’s a fight that could draw 15,000 to 20,000 fans depending on how well it’s marketed.

Khan has been talking about how he wants to fight Floyd Mayweather Jr and Manny Pacquiao for the longest of times. Unfortunately, without Khan having the fan base that he needs for him to get Mayweather and Pacquiao, he’s kind of left out in the cold. The thing is Khan would likely get a fight against one of those big superstars if he had Broner’s name on his resume in the win column. I mean, we saw how Marcos Maidana was able to get a big fight against Mayweather after he defeated Broner in their fight in December 2013. 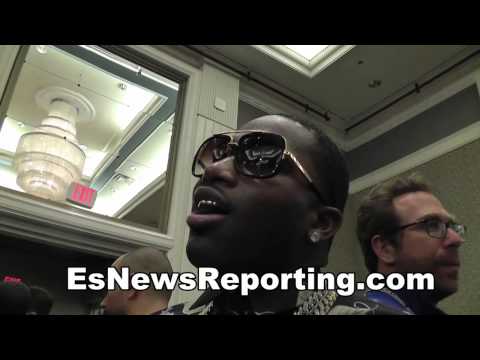 Khan had been sitting back idly waiting for a fight against Mayweather in late 2013, but since his only recent wins had come against Luis Collazo, Julio Diaz and Carlos Molina, he was unable to get the fight. But beating Broner proved to be the deal clincher for Maidana to get the Mayweather fight. Khan doesn’t have a big name on his resume in his recent fights, so he’s kind of in a bad situation.

Khan’s win over Devon Alexander is pretty much meaningless, because Shawn Porter beat Alexander in a far more convincing and exciting manner than Khan did. That’s why the fight didn’t make any sense at all for Khan. Why would Khan choose Alexander as an opponent when he was recently beaten to a pulp by Porter? Khan put himself in a no-win situation by taking that fight instead of taking on a more relevant opponent like Keith Thurman, Maidana, Porter, Lucas Matthysse or Kell Brook.

“Adrien Broner is versatile; I can fight, I can box and I can bang,” Broner said. It’s going to keep getting better. As long as I keep shutting guys out…”

Khan should speak with his mutual adviser Al Haymon to see if he can line him up with Broner, because this is a fight that could potentially help both fighters. If Khan wins, he’ll likely get the big fight that he’s been yapping about against Mayweather or Khan. If Broner beats Khan, he’ll be one step closer to becoming a pay-per-view attraction. Broner needs to become a pay-per-view attraction for him to get the big money that he’s been talking about. He’s not going to get the huge money fighting on free TV.

« Kovalev to be tested by Pascal, says Kellerman