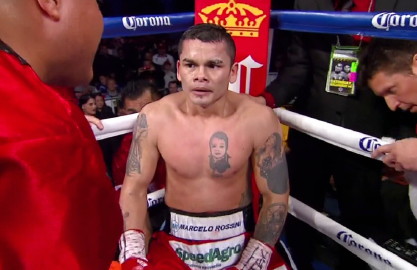 By Allen Hmiel: Trainer Robert Garcia obviously has done a remarkable job in re-creating Marcos Maidana (35-3, 31 KO’s) into a complete fighter and boxer. In the past, Maidana used to be a one dimensional slow wild punching fighter relying on a knock out to win his big fights.

Now after watching Maidana dismantle and embarrass the arrogant once undefeated WBA welterweight champion Adrien Broner (27-1, 22 KO’s) in giving him a sound beating at the Alamodome in San Antonio, Texas, we witnessed a boxing transformation of epic proportion with Maidana.

Garcia put Maidana into a position to win a championship over Broner in a title fight where few boxing experts gave Maidana any chance of winning the fight.

Ever since Maidana has been under the tutelage of Robert Garcia the change and transformation of Marcos has been overwhelming to say the least. Garcia has turned Maidana into an all-around fighter. He showed that with his upset over the vastly overrated and self-hyped Broner last night.

Garcia has developed and re-tooled Marcos Maidana into a complete fighter with a hard jab added to Maidana’s already arsenal of weapons. The champion Maidana was successfully transformed from a brawler into a complete fighter by Garcia with the increased confidence that his new skills would enable Marcos to beat any fighter in the world.

In the past year, Garcia and Maidana together worked hard to transform and develop the necessary boxing skills to enable Marcos to finally go from a one-dimensional undisciplined puncher into a world class boxer with an array for weapons including the new found hard jab.

Congratulations to Maidana on the fine win over Broner. And props to the trainer Garcia for developing Marcos into the world champion at 147lbs. Garcia is more of a boxing artist who painted his masterpiece in transforming Maidana into a boxing work of art. Simply a great job by a trainer Robert Garcia in developing a fighter into a champion.

« Adrien Broner exposed by Maidana and here’s why

Broner pelted with trash as he leaves ring after loss »