When does the 0 have to go? 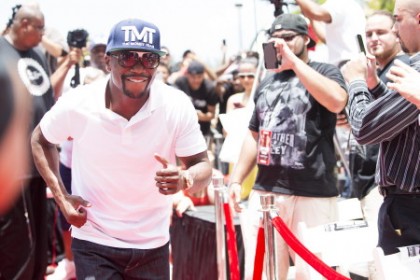 (Photo credit: Esther Lin/Showtime) By Jamie Eskdale: When you first hear of a boxer be it a young contender, a foreign fighter or just someone hyped by a promotional stable generally the first thing you look at is the fighters’ record. 9 times out of 10 these guys will have a perfect record. A 0 in the L column is usually a given. But is it really all that impressive to be undefeated? What does it actually stand for?

Take a look around the sport right now and you will see a whole host of fighters with unbeaten records from untested heavyweights Tyson Fury and Deontay Wilder to Adrien Broner, Saul Alvarez and Gennady Golovkin right all the way up to the man who sits atop the tree Floyd Mayweather Jnr.

Looking at an unbeaten fighters record and it is easy to be impressed but if you look closely and start scratching beneath the surface a bit generally ( though maybe not in all cases) it is easy to pick it apart. Be it a contentious points win here, or being loaded with tomato cans a résumé that seemed good can suddenly look well not really all that great.

If you look at Adrien Broner a man they call ‘the problem’ here is a man who has certainly been given the hype. The new star of boxing, the next P4P king some will tell you.

At the ripe old age of 23 Broner is a 3 weight world champion his record stands at 27-0 and at first glance it certainly looks impressive. But looking closer and there are 3 clear question marks over the legitimacy of his record. Fernando Quintero, Daniel Ponce De Leon and more recently Paulie Malignaggi have all claimed robbery against Broner. Malignaggi even went further and questioned a judges integrity and claimed ‘connected fighters’ always get the decisions. Hard to argue with that but that’s the theme of a different article entirely.

Undoubtedly Broner is a talent and maybe even because of the way he divides opinion his close calls do get jumped on quicker than other fighters. However if you go by the old boxing saying that the challenger has to take the title from the champion then it is hard to argue that Broner did this against Malignaggi.

Even the man with the most famous unbeaten record of all has a question mark on his résumé. In his 28th fight he took on Jose Luis Castillo. Many observers, pundits and fans alike gave the fight to Castillo. I actually recently watched the fight with the sound muted and gave it to Castillo by 2 points. Though I must point out that I am merely a fan and in no way qualified to score a bout. In fact it is easy to make a case for Mayweather in the fight too.

It does seem and has seemed for quite a while now that anytime Floyd is hit cleanly it is magnified and made a big deal of so in essence you could be watching Mayweather land 4 or 5 shots then his opponent land 1 or 2 and more than likely you would remember the opponents punches simply because Floyd doesn’t often get hit cleanly. In Mayweather’s defence he gave Castillo a rematch 8 months later and won it clearly. But the question mark over the legitimacy of the first win will always be there.

If you look at Saul Alvarez here is a guy who at 22 has had 43 fights. Yes 43 fights! Of the 43 the biggest names on it are a past his best Shane Mosley, an over the hill Kermit Cintron and a good victory over Austin Trout( though even in this fight his detractors will make a case for trout winning). Like I said earlier at first glance it looks really impressive but looking closer it then starts to look a little thin. This isn’t to take anything away from the guy. He can only best who his promoters put in front of him but again his résumé could be misleading.

The guys who have been highlighted in this article weren’t highlighted for any particular reason other than the fact they’re undefeated. There are plenty more I could have used as examples and I’m sure you could think of some yourself. The point is that fighters are being hyped a lot based on unbeaten records. A lot of times they’re being matched soft to build this aura. It would even seem that some guys are scared of losing the 0 and maybe avoid fighting guys with certain styles to maintain it.

These days there is so much emphasis put on being unbeaten that it is probably doing more harm than good. Their not facing certain styles to protect the unbeaten record to make themselves look good but at the same time their not fulfilling their potential.
Sure they can train and spar but there is only so far this will take a fighter. Nothing can compare to real live competitive action. If you need to take a loss then fair enough if it actually serves a purpose to make you smarter, more adaptable and better overall.

Of course a defeat can actually ruin a fighters’ career as well but it is professional boxing and nobody said it was supposed to be easy. At the same time it can be countered that it is a job and these guys have a right to maximize their earning potential.

Whatever way you look at it that in the professional boxing game an unbeaten record isn’t the be all and end all and doesn’t really mean as much as some people think. Most fans are actually knowledgeable and can spot a good fighter when they see one.

It would be great to go through a full career unbeaten and look back with pride. But what does it actually mean if you know you avoided certain challenges at certain times and had a lot of what if’s.

look through the years and which boxers are lauded and most fondly remembered. Ask most fans and the names that come back would be Muhammad Ali, George Foreman, Ray Leonard, Marvin Hagler and more recently Oscar De La Hoya, Shane Mosely, Manny Pacquiao, Roy Jones Jnr.

I could go on and on but the thing all these guys have in common is that at some point their 0 did in fact go.