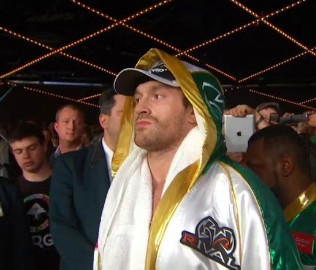 By Scott Gilfoid: The September 28th fight between British heavyweights David Haye (26-2, 24 KO’s) and Tyson Fury (21-0, 15 KO’s) was made official today. The mega domestic level clash will be taking place at the Manchester Arena in Manchester, UK. There will be a press conference this Thursday, July 11th, to officially announce the fight.

All I can say about this fight is that Fury is about to get exposed worse than David Price did in his two knockout losses to Tony Thompson. I do see one difference in this fight and the Price-Thompson fights and that has to do with the way this fight will end. I see Haye knocking Fury out with a brutal right hand shot in the 1st or 2nd round.

In contrast, Price as knocked out by a pretty soft looking right hook from Thompson in their first fight in February this year, and then Thompson got the second knockout last Saturday night after landing an accumulation of blows against a tired out Price.

Haye is going to knock Fury out with a shot that is likely going to send him down face first on the canvas from a single punch. I don’t see Haye needing more than one solid punch to stop the 6’9” Fury in this fight.

Fury isn’t ready for this fight; not even close to being ready. We just saw Fury knocked down by Steve Cunningham last April and badly hurt by him in that fight. Fury was able to get up and continue fighting and eventually win the fight, but that was largely due to Cunningham having gassed out in the 2nd round from throwing the hard right hand that knocked Fury down.

Haye isn’t going to tire out in the same way. Fury doesn’t have the chin that Carl Thompson had in taking shot after shot from Haye back in 2004 when Carl Thompson pulled off a big upset in beating Haye by a 5th round TKO.