Pavlik-Rubio: Will Kelly Have Lingering Effects From His Loss To Hopkins? 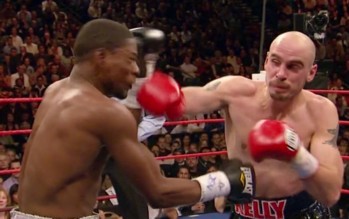 By Matt Stein: WBC/WBO middleweight champion Kelly Pavlik (34-1, 30 KOs) would like people to think that he’ll be the same fighter he was before his recent one-sided 12-round unanimous decision loss to Bernard Hopkins in October 2008. Besides the obvious fact of the probable mental after effects of being soundly beaten in a shocking loss to the 43-year-old Hopkins, there’s also the possible results of having been beaten for a full 12 rounds by the powerful shots from Hopkins.

You never what can happen when a fighter is forced to absorb a tremendous amount of punishment in a fight that was never in the least bit competitive. In looking back at the fight, it might have been better if Pavlik’s team considered pulling the plug on him as early as the 8th round when it was pretty much clear that he was totally outclassed in this one and that he had little chance of beating Hopkins by decision or by knockout.

Instead, Pavlik was allowed to continue fighting and take an awful lot of needless shots to the head that didn’t help him. In the end, Pavlik’s face was bloody, swollen from all the shots he took and his once unblemished record now had a defeat in its place. So bad was the beating, that there wasn’t even a thought of trying to take Hopkins on in a rematch.

The good thing, if there was any, was that Pavlik’s middleweight titles weren’t on the line because he had moved up to fight Hopkins at a catch weight of 170 pounds. Immediately after the lopsided decision to Hopkins, Pavlik announced that he would be moving back down to the 160 pound middleweight class were hopefully the pickings were a little easier. Indeed, if there’s a fighter out there – and who knows? there might be – with even a fraction of Hopkins’ boxing skills, then I see Pavlik being beaten once again by another one-sided decision.

On February 21st, Pavlik will be meeting up with his number #1 challenger Marco Antonio Rubio (43-4-1, 37 KOs) at the Chevrolet Centre, in Youngstown, Ohio. And, unlike in Pavlik’s last fight, he’ll be facing in front of a huge hometown crowd which should help Pavlik in theory. Yet if Rubio has been following the blueprint that Hopkins set for him then Pavlik could be facing some serious problems.

As Hopkins showed, if you don’t go right at Pavlik, instead using lateral movement, a lot of jabs, quick flurries and strategic clinching, then Pavlik is for the most part toothless. He’s effective when an opponent stands directly in front of him the way that knockout artist Edison Miranda did in losing by a 7th round TKO in May 2007, but if a fighter moves a lot and uses speedy shots, he stands a much better chance as Hopkins displayed.

Even without using this style of fighting, Pavlik may be a degraded fighter from all the punishment he took from Hopkins. However, I expect Rubio to be clever enough not to try and trade big shots with Pavlik, because he’s probably aware of what will likely happen if he tries to fight it out with him at close range.