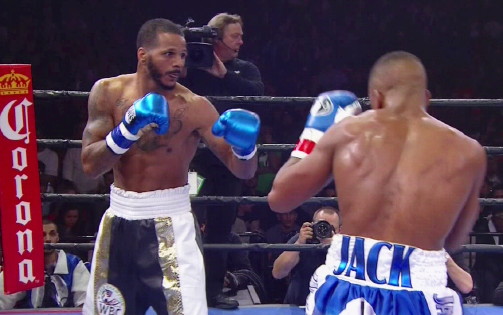 By Scott Gilfoid: The talented former WBC super middleweight champion Anthony Dirrell (27-1-1, 22 KOs) will be looking to get back on the winning track next month on September 6th against former world title challenger Marco Antonio Rubio (59-7-1, 51 KOs) in an important battle for both fighters on premier Boxing Champions on CBS at the American Bank Center in Corpus Christi, Texas.

Both Dirrell and Rubio are coming off of disappointing losses in their last fights. It was lot worse for Rubio, who was totally smashed to bits in a 2nd round knockout loss to WBA middleweight champion Gennady Golovkin last year in October 2014.

Rubio was just not competitive at all against Golovkin in that fight, and he should have focused on trying to stay away from the hard hitting Kazakhstan instead of looking to mix it up. With Dirrell, he lost a close 12 round majority decision to Badou Jack last April in a fight that could have gone either way.

Dirrell could have easily won the fight had he simply attacked Jack more and thrown more combinations instead of playing throwing single power shots the entire fight. Dirrell looked like he was trying to score a single punch knockout the entire fight. His talented brother Andre Dirrell was trying to get Anthony to throw combinations, but he couldn’t make the adjustments needed for him to turn back the threat from Jack.

The 35-year-old Rubio is asking for trouble in this fight by moving up in weight from the middleweight division. Dirrell can really punch, and he has Golovkin-like power when he loads up on his single shots. What Dirrell doesn’t have is the ability to throw combinations like Golovkin can.

Dirrell loads up on a big shot, and then waits for ages before throwing another one. If He could just pound away on his opponents with nonstop combinations like Golovkin, I could see him making quick work of Rubio in one or two rounds. As it is, I think Dirrell is going to blast Rubio out within six rounds. But it would be a lot easier if Dirrell just stepped on the gas and unloaded on Rubio with a storm of shots without stopping to check on his work the way he tends to do.

“I’m ready to get back in the ring and prove that I’m still one of the most dangerous men in the game,” said Dirrell. “Rubio is a tough guy but I’m coming to knock him out and eventually get my title back. ‘The Dog’ is coming to Texas looking to inflict some pain.”

Both fighters need victories in this fight to restart their careers. If Rubio loses, he’ll at least have the excuse that he was fighting a talented bigger guy from the 168lb division as a reason for him getting whipped. But it’s a lot worse for Dirrell, because if he can’t even beat an aging shorter fighter from the middleweight division like Rubio, then it would be a pretty clear sign that Dirrell isn’t going anywhere in the super middleweight division or in boxing. I don’t see that as being the case for Dirrell, because I fully expect him to get the victory, but you never know. Rubio can punch hard, and he has a lot of experience. If Dirrell hasn’t fixed his flawed single shot fighting style, then this fight could result in another loss for Dirrell.

Before his loss to Badou Jack this year, Dirrell had two grueling fights against Sakio Bika where he had to take a lot of punishment in getting the victories. While the second fight was a lot easier than the first for Dirrell, it was still a very difficult one for him to get the win.

Dirrell needs a victory over Rubio to help push him up the rankings so that he can get a shot at the winner of the September 12th fight between Badou Jack and George Groves. Dirrell wants to avenge his defeat I the worst way. But if Groves wins the WBC title, then he’ll be Dirrell’s focus because the title comes first for him.

Dirrell matches up really well against guys like Groves and James DeGale. These are pot shot fighters with much slower hand speed than himself, and they have the kind of fighting styles that Dirrell does really well against. The fighters that cause Dirrell problems are guys that throw a lot of shots like Jack. Thankfully, there are only a small handful of fighters like Jack in the division right now, so Dirrell doesn’t have to worry too much.