Golovkin-Rubio brings in 1.3 million viewers on HBO, a huge hit! 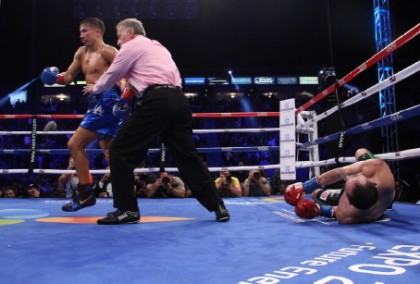 (Photo credit: Sumio Yamada) By Dan Ambrose: If Miguel Cotto and Saul “Canelo” Alvarez needed the motivation to fight WBA Super World middleweight champion Gennady Golovkin (31-0, 28 KOs) then all they need do is look at the huge ratings his fight against Marco Antonio Rubio (59-7-1, 51 KOs) generated last Saturday night on HBO Championship Boxing from the StubHub Center in Carson, California.

The Golovkin-Rubio fight averaged 1,304 million viewers, according to Dan Rafael of ESPN, which makes it the 2nd most viewed fight of the year. That’s not bad for a fighter who can’t get Canelo and Cotto to fight him.

”Per Nielsen: GGG-Rubio a big hit. Averaged 1.304M viewers for the bout, 2nd-most viewers for a fight this year in the US. Donaire-Walters averaged 1.1M viewers, peaked at 1.166M viewers. #boxing. Golovkin-Rubio peaked at 1,323,000 million viewers.”

With Golovkin bringing in numbers that are on part with those two stars, it tells you that Golovkin is already up there with them in terms of popularity. That means that even if Cotto and Canelo choose to never fight Golovkin, he’s still going to be a highly successful pay-per-view fighter even without them.

It’s not likely that Rubio helped Golovkin’s numbers much for this fight card, because Rubio doesn’t have a huge fan base, and he came into the fight without having ever beaten a high quality fighter before.

Money May vs. Stephen A.? – Mayweather, Jr. and Smith Trade Verbal Jabs »