Tony Bellew vs. Arturs Kulikauskis this Saturday in Leeds 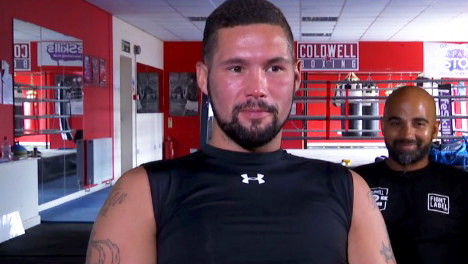 By Scott Gilfoid: Former world title challenger Tony Bellew (24-2-1, 15 KOs) will be fighting little known Latvian journeyman Arturs Kulikauskis (16-26-5, 8 KOs) this Saturday in a scheduled eight round bout in cruiserweight action at the First Direct Arena, Leeds, England. The Bellew-Kulikauskis will be taking place on the undercard of the Josh Warrington vs. Joel Brunker super bantamweight clash.

Bellew, #3 WBO, #7 IBF, #9 WBA, #10 WBC, is waiting for the smoke to clear in the fight between IBF cruiserweight champion Yoan Pablo Hernandez and Victor Ramirez. Bellew’s promoter Eddie Hearn will be getting Bellew a shot at the winner of the Hernandez-Ramirez fight despite the fact that there are arguably much more talented fighters ranked above Bellew in Rakhim Chakhkiev and Dmitry Kudryashov.

Hearn will likely get Bellew a title shot regardless of his lower ranking compared to those other contenders. Bellew said recently that he would be the best fighter in the cruiserweight division if he beats Yoan Pablo Hernandez, because apparently he rates him above the other top cruiserweights.

Personally, I see Hernandez as a name from the past. He’s a fighter that was good in the past, but the younger generation has moved in like Olesandr Usyk, Kudryashov, Thabiso Mchunu, Ilunga Makabu and Chakhkiev.

For Bellew, this is his third straight mismatch since he moved up to the cruiserweight division. After his close call win over 38-year-old Valery Brudov, Ivica Bacurin and Julio Cesar Dos Santos. Bellew and Hearn aren’t going to take any chances whatsoever in facing anyone of quality at cruiserweight before they get a title shot.

So what we’re seeing here in Bellew facing a journeyman with a dreadful ring record in Arturs Kulikauskis (16-26-5, 8 KOs) is business as usual for Bellew. He takes the weak opposition while he waits his turn to get a title shot against IBF champion Yoan Pablo Hernandez that he arguably doesn’t deserve.

Heck, Bellew doesn’t even deserve being picked out as a voluntary challenger for Hernandez because Bellew has not beaten anyone of quality since moving up to the cruiserweight division.

Kulikauskis has faced some well-known fighters in the past, such as Ismayl Sillah, Mirko Larghetti, Yuriy Barashian, Dariusz Sek, Aleksy Kuziemski, Mateusz Masternak and Thierry Karl. Unfortunately, he’s lost to all of those fighters and never beaten anyone good.

Dirrell, #5 WBC, lost his last fight against the talented Badou Jack (19-1-1, 12 KOs) by a 12 round split decision last April in an exciting fight.

Dirrell is catching the hard hitting Rubio at the right time with him coming off of a disastrous 2nd round knockout loss last October to IBO/WBA middleweight champion Gennady “GGG” Golovkin. Rubio has been out of the ring for the past 11 months for whatever reason.

The defeat to Golovkin must have been a crushing blow to Rubio’s psyche to keep him out of the ring for this long, but he simply ran into a human buzz saw in taking on the talented Golovkin in the prime of his career. There’s no stopping a fighter like Golovkin, especially if you’re going to try and trade power shots with him the way that Rubio foolishly attempted to do.

For Dirrell to defeat Rubio, he’s going to need to improve on his work rate, because he threw far too many single pot shots in his loss to Badou Jack last April. Dirrell will need to throw combinations and let his hands go for him to have a chance of winning the fight.

Rubio is capable of throwing combinations, and he obviously is going to be looking to throw as many punches as possible. Unless Dirrell can get lucky in hurting Rubio with one of his big pot shots, this could be a very difficult fight for him.

Dirrell doesn’t move like his talented brother Andre Dirrell, so he can’t use movement to stay out of the way of Rubio’s power shots. Anthony Dirrell is flat-footed, and immobile, and he’s going to be forced to stand in the pocket to try and beat Rubio at his own game.

Lee Selby vs. Fernando Montiel: is it a competitive bout for you? »