Devin Haney: “I didn’t have to honor the rematch” with Kambosos Jr

By Sean Jones: Undisputed lightweight champion Devin Haney says he didn’t have to give George Kambosos Jr a rematch and that he could have vacated his four belts and moved up to 140 to campaign at that weight.

Haney (28-0, 15 KOs) chose to stay at 135 and give Kambosos (20-1, 10 KOs) his rematch as part of their contract. The two will be facing off this Saturday night, October 15th, in the battleground at the Rod Laver Arena in Melbourne, Australia. 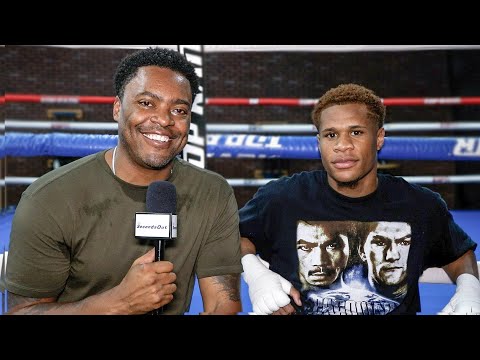 For the needy Kambosos, this is probably the last chance he’ll ever get to fight for a world title, so he will need to make the most of it.

If Kambosos loses, he’ll either retire or be pushed down far in the rankings at 135 and be in a position where he would need to scratch & claw his way to try to get another title shot.

Let’s face it, Kambosos isn’t going to beat any of those contenders, so Saturday night could be the end of the line for him unless he pulls off a major upset by beating Haney.

“Are they really, though? I think they’re waiting for me to vacate,” said Devin Haney to Secondsout when told that everyone in the lightweight division is waiting for him.

“No, that’s not in my mental,” said Haney when asked if he wants to make Vasyl Lomachenko wait for a title shot in the way that Loma made him wait.

“I don’t really care to make him wait or not make him wait. Right now, my main focus is George Kambosos, and then if everything makes sense and I can make the weight again, strong, we can get it on,” Haney said about Lomachenko.

“Boxing is not a fair game. I don’t think like that. ‘He made me wait, so I’m going to make him wait.’ I want to make the biggest fight happen. I care about legacy, and I care about everything making sense.

“The greats defended the belts. Pernell Whitaker defended his belts as undisputed, so that’s my goal. Obviously, we know I’m huge for the weight class. I’m only getting bigger. So we’ll see how long I can defend the belts. I definitely look forward to defending them.

“I wouldn’t say it’s someone I necessarily need to beat to move up. It’s about mu h body and what it can take and stay at the weight class. It’s not about beating a specific person because I beat the man who beat the man.

“As Tyson Fury would say, I’m the lineal champ. I could have moved up already. I didn’t even have to honor the rematch, but I did. We got to see how I feel after this.

“I look forward to stay in the lightweight division, but we’ll see,” said Haney.

Unlike Most Boxers Lennox Lewis Knew When to Retire! »