Unlike Most Boxers Lennox Lewis Knew When to Retire!

By Ken Hissner: Thanks to readers of boxingnews24, I realize it wasn’t because Lennox “The Lion” Lewis retired to avoid a rematch with Vitali “Dr. Ironfist” Klitschko, who was ahead in their match when a cut caused his loss.

One reader said, “Lennox Lewis was out of shape,” and knew it was time to retire. If only such boxers in all divisions especially looking at heavyweights, why didn’t Muhammad “The Greatest” Ali retire when his cut-man Ferdie Pacheco said after Ali won the rematch with “Neon” Leon Spinks that he was done and that Ali should retire being done?

Ali whom I saw at his Dear Lake training camp in Pennsylvania less than an hour from where I live and asked, “why are you taking this fight (knowing Larry “The Easton Assassin” Holmes would defeat him) in the shape you are in?” His stomach was bigger than mine. He padded it and said, “I like my ice cream!” I added, “you and Max Baer had the best physics of most of the heavyweight champions!” It would be the only time Ali was stopped in his sixty-one fight career.

Holmes held on long enough that “Iron” Mike Tyson destroyed him. Holmes ended his career making a known four-round fighter in Eric “Butterbean” Esch have to go ten rounds, but Esch scored a knockdown in the tenth and final round, even if questionable. Holmes figured he would stop a four-round fighter which “Butterbean” was known for if he had to go ten, but he went the distance with Holmes.

Joe “The Brown Bomber” Louis, after losing his title to Ezzard Charles in 1950, would go on to win eight fights against mostly non-contenders and was knocked threw the ropes by Rocky Marciano, ending his great career the following year in 1951!

James “The Boilermaker” J Jeffries was smart to retire at 19-0-2 in 1904 but came back in 1910 only to lose to Jack “Galveston Giant” Johnson having to lose some 100 pounds. He had been embarrassed even by his pastor, who said, “we have a coward amongst us,” hoping white Jeffries would defeat the first black heavyweight champ in Johnson.

I could go on and on, and I know our sharp readers will come up with many who stayed too long! 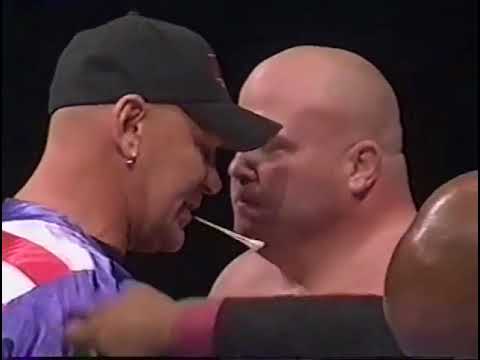 
« Devin Haney: “I didn’t have to honor the rematch” with Kambosos Jr