Sanchez states that he sees IBF/WBA/WBC welterweight champion Spence (28-0, 22 KOs) as the “better fighter” than WBO champ Crawford (38-0, 29 KOs), who has more miles on his odometer.

Abel says the 35-year-old Crawford isn’t active enough, and he’s too passive in some of his fights. Sanchez feels that Crawford is smaller than Spence, which makes sense given that he started his career at lightweight and didn’t move up to 147 until 2018.

We’ve seen Crawford struggle against Amir Khan, Shawn Porter, Kell Brook, Egidijus Kavaliauskas, and Jose Benavidez Jr since moving up to welterweight. The only guy that Crawford had an easy time with was Jeff Horn.

Sanchez says Spence will easily deal with Crawford changing stances during the fight. Spence is a southpaw, and it will not phase him if Crawford switches to orthodox.

If Crawford stays in the southpaw stance the entire fight, Spence will deal with that with ease as well. Crawford can always get on his bike, but if he does that, he’ll lose a wide decision.

The only way for Crawford to win is for him to beat Spence at his own game by slugging with him because he’s not going to defeat him by using gimmicks like changing stances repeatedly. That junk won’t work.

Fouling won’t work for Crawford if he chooses to low blow Spence like he did Khan. Crawford can’t count on Spence quitting the way Khan did because he’s not a quitter.

“I think Spence does,” said Abel Sanchez to Fight Hub TV when asked who wins the Errol Spence Jr. vs. Terence Crawford fight. “When they came out of the Olympics, I thought Spence and the light heavyweight from back East.

“For me, I thought Spence and him were the best prospects to win a professional belt, and both of them have done that. I was real high on Spence. I thought he was an exceptional fighter, and I thought his coach was a young coach on the rise, and they proved me right.

“I’m happy to see him [Spence] successful. I’m sad to see him to get in an accident. I think he’s got the talent and the size to beat Bud. I think Bud is not active enough.

“Neither one is active enough, but the other guy [Spence] has less miles on him and should beat Crawford. He won’t stop him, but I think he’ll control him from the outside. His jab will be significant. Whether Bud goes right or left-handed, I think Spence will deal with it easy.

“That’s what makes this game so interesting. Everybody has got an opinion. We hope it’s a good fight for all of us and just stick by our predictions because a lot of us, ‘I knew that was going to happen.’

“All of a sudden, you change your mind, and just like I said about Golovkin and Canelo, everybody is talking about Golovkin is going to stop him. After the fight, Golovkin was an old man.

“I honestly think Spence is the better fighter at this stage. It’s that he’s [Crawford] the smaller guy. Bud’s a special talent, and Spence will move up to 154 and do well.

“It’s a smaller guy against a bigger guy who is younger and a little more spirited, and that’s why I think Spence wins. I think Bud is a little too passive in some of his fights, and I think Spence will take advantage,” said Sanchez. 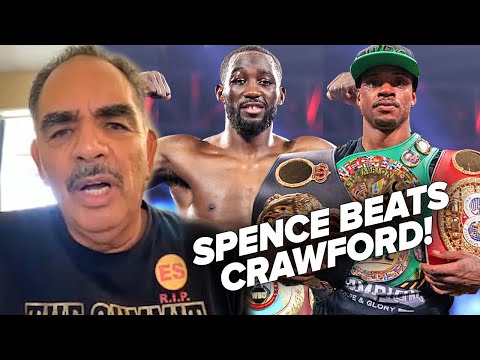 Did Team Joshua intentionally sit on contract for Fury fight? »