Did Team Joshua intentionally sit on contract for Fury fight?

By Allan Fox: Anthony Joshua’s management’s delay in working through the contract for the Tyson Fury fight may ultimately have saved their fighter from suffering a career-ending loss on December 3rd.

The question is whether Joshua’s management intentionally dragged their feet in reviewing the contract.

If they had misgivings about Joshua (24-3, 22 KOs) jumping straight back into the ring after back-to-back defeats against Oleksandr Usyk for a foolhardy fight against Fury, it was a clever move for them to run out the clock when given a 5 pm deadline on Monday by Fury.

Luckily for Team Joshua, Fury (32-0-1, 23 KOs) is arguably spoiled at this point in his career and has no patience for the contract being reviewed. If Fury was patient, Joshua could be heading towards his third straight defeat, which would sink his career.

“I don’t know. It was never going to get signed by five o’clock. That was the ultimatum that Tyson put on, but we’re waiting for it to come back,” said Frank Warren to talkSPORT Boxing about Anthony Joshua’s contract.

“If it comes back, we can get things sorted out quickly. Hopefully, we might be able to get it on. Tyson has sort of lost patience. They’ve had it for ten days, and that’s where we’re at.

“I don’t like deadlines. I don’t like doing all this, but that’s what Tyson said, so that’s where we are. So, we got to keep working and see where we get with it,” said Warren.

NEWS:   Eddie Hearn says Whyte to fight Joshua in "first half of 2023" if he beats Jermaine Franklin

Ideally, Fury should have kept his yap shut and let Joshua’s management look over the contract because it’s not as if he’s in a mad rush to get to a different fight. Fury’s fight with IBF, WBA & WBO champion Oleksandr Usyk won’t be happening until February or March.

The Joshua fight wouldn’t need a huge promotion because the contest would sell itself. Fury’s decision to quickly bail on the Joshua fight is a red flag, suggesting that he never wanted it in the first place.

It’s possible that the fight that Fury wanted all along was the match against Manuel Charr because it’s an easy one for him, and there’s no risk involved.

Despite Joshua losing three out of his last five fights, he’s still the equivalent of an unexploded ordinance for Fury.

While Fury might believe that Joshua is harmless at this point, but he’s just as dangerous as he’s always been, and he could knock him out as he’s done against many of his opponents since turning pro in 2013.

“I think Tyson should shut his mouth and calm down a little bit,” said Simon Jordan. “I don’t like some of the things that are coming out of his mouth. I know he’s the heavyweight champion of the world. I know that comes with an element of arrogance and self-confidence.

“I didn’t like his antics on Saturday night where he stole all the attention from Joe Joyce and Joseph Parker, and I don’t like some of the language he uses.

“He has an element of entitlement. If we give you a contract and the management team of the people that you’ve given the contracts to may not be as responsive as they possibly could be.

“If I’m the management team of a fighter that is being given an opportunity, irrespective of how billable and bankable that fighter is still, I’m going to turn that contract around pretty quickly with my markups.

“I can put the onus back on the other side and say I want this fight, the contract’s done. I wonder if that is indeed the case. I wonder if relationships with broadcasters, the monetizing of a fighter.

“If he [Joshua] gets knocked out by Tyson Fury, he goes nowhere. He’s finished, he’s done, he retires. But people have got contracts with DAZN. People have long-term relationships with DAZN, which Anthony Joshua is a key component of.

“It feels to me that there’s not enough endeavor. Two weeks to have a contract, and they’ve had it for two weeks. It’s long enough. The deadline of five o’clock is Tyson Fury jumping up and down, going, ‘I’m the boss, I’m the man. I tell you when it gets done.’

“But if you turn a contracts around, even if you show best endeavors to go. ‘We’re not finishing this contract by five o’clock. It’s not practically possible. The Queen has passed away during the time of the contract.

“‘We’ve been around dealing with big fights in America. We’ve got other things to do. We haven’t been able to make meetings or take Zoom calls because that’s not how it works.

“‘What we’ll do is we’ll show intent by sending you back a marked-up copy of what we want.’ Imagine if you’re Frank Warren or George Warren, and you get a marked-up contract back from Eddie Hearn.

“You walk up to your guy that is jumping up and down like a demanded Tasmanian Devil and say, ‘Tyson, shut up. This is under control. It’s moving in the right direction.’ You might find that Tyson Fury isn’t flapping his gums.

“He wants it as a tune-up to fight Usyk in March for the undisputed in Suadi Arabia where he gets a big bag of money. Joshua is just a side distraction.

“I believe the devil is in the details, and you might have to look somewhere else. Given the opportunities given to Joshua, the people that have to work harder to get the contract completed are those that are given a bigger opportunity.

“Joshua, like the typical fighter that he is, his reaction would be, ‘I’ll have that fight.’ Maybe the management thinks, we don’t want to cash the checks your mouth is writing right now because maybe it’s not in your best interest to be fighting Tyson Fury because if you get your clock cleaned, then that’s you done,” said Jordan. 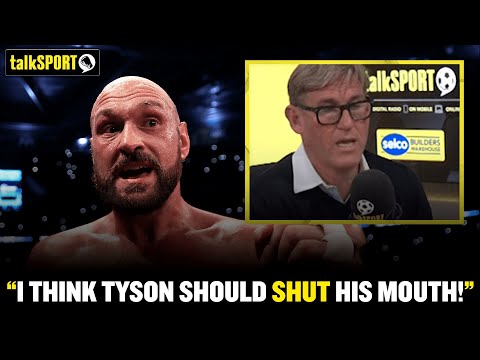 Keyshawn Davis tells Haney that “Shakur about too whoop your a**” »