Eubank Jr: “Benn doesn’t know what it’s like to fight at this level”

By Brian Webber: Chris Eubank Jr. says he expects Conor Benn to fight cautiously early on against him in their 157-lb catchweight fight on October 8th because he’s never fought at “this level” before.

Up until now, Benn has been matched against older fighters that weren’t a threat to beating him. None of the opponents Benn has faced during his six-year professional career had any pop in their punches to worry him.

Eubank Jr (32-2, 23 KOs) can punch, and if he’s not drained from making weight, he’s going to be more than a handful for Conor.

“He’s going to be very careful early on because he doesn’t know what I am and what it’s like to fight at this level, so he has to feel it out,” said Eubank Jr to Matchroom Boxing about Conor Benn.

“If he does go full steam ahead from round one, I’m going to be very impressed. So we’ll see,” said Eubank Jr.

“I want to win this fight in a brilliant fashion,” said Benn. “There’s a lot on the line here. I can’t lose this fight. That’s the way I look at this. I just can’t lose it.

“It’s been so difficult for me over the last month to try and keep my mouth shut,” said Eddie Hearn. “With the Eubanks, its always difficult. This fight is so big across so many generations.

“My dad promoted both of these fights [between Chris Eubank Sr and Nigel Benn]. I watched both fights.”

“It’s more of a challenge. I will make that weight. It’s just how hard it is going to be. I don’t know, but I will make it because I’m a professional. In that sense, I will be at a disadvantage because he’s going to be fully rehydrated,” said Eubank Jr. 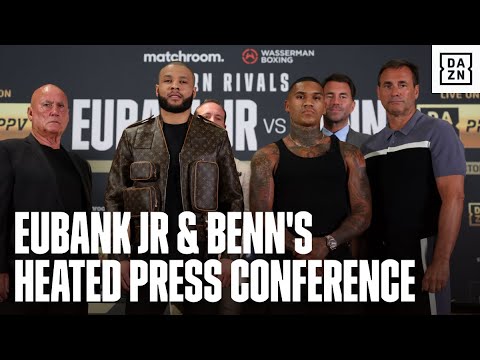