By Adam Baskin: Next Saturday’s rematch between Oleksandr Usyk and Anthony Joshua will be broadcast live on DAZN on August 20th from Jeddah, Saudi Arabia. Usyk vs. Joshua II will be shown on DAZN in 190+ markets around the world.

DAZN will be the platform that gets the enviable opportunity to broadcast the Usyk-Joshua 2 rematch on Saturday, August 20th to their subscribers.

AJ wants revenge for his loss to Usyk last September in London, England. Joshua has changed out his training team and is believed to be coming back with the intent of being more aggressive in the rematch. Usyk will be defending his IBF/IBO/WBA/WBO heavyweight titles against Joshua at the Jeddah Superdome in Saudi Arabia.

The DAZN Boxing Show will cover the fight during the week, giving updates on what’s happening between the two fighters. 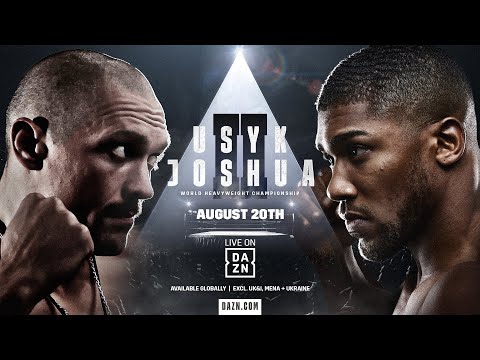 “I’ve got to fancy Usyk. I feel that Usyk boxed under orders last time and could have stopped him,” said Frank Warren to Pro Boxing Fans. “I think he’ll fancy the fight even more and take it to him.”

“As much as AJ is going improve, Usyk has improved,” said trainer Joe Gallagher. “I think Usyk’s professional career is a carry-on of his Olympic career.

“When you’re an Olympian, you’re used to traveling around, fighting the best in the world all the time in tournaments.

“You look at his professional career and what he’s done in title fights, the amount of champions he’s beaten in their own back garden. It’s just another day at the office for Usyk.

“I just think as much as Anthony is going to improve and the adjustments Garcia will make and mindset, Oleksandr Usyk isn’t going to be the same kid that turned up.

“We’re not having an Andy Ruiz or an overweight Buster Douglas or anything else. We’re dealing with Usyk here, who’s a world-class athlete. As much as AJ will improve, Usyk will make adjustments as well.

“For AJ, people are saying you’ve got to go out and put it on him, but he’s going to walk on more shots than he did last time.


« Callum Smith: “Beterbiev will have to fight me” if I beat Mathieu Bauderlique next Saturday

Eubank Jr: “Benn doesn’t know what it’s like to fight at this level” »