Teofimo Lopez refuses to give Lomachenko a rematch

By Dan Ambrose: Teofimo Lopez is stubbornly resisting the idea of giving former three-division world champion Vasily Lomachenko a rematch despite the closeness of their fight last month on October 17th.

What’s interesting is how adamant that Teofimo is about NOT giving Lomachenko a rematch. For the young 23-year-old Teofimo to be so against fighting Lomachenko a second time, it’s a red flag that he lacks the confidence to beat the talented Ukrainian fighter again, especially with him healthy and 100%.

It was learned after the fight that the two-time Olympic gold medalist Lomachenk had fought the Brooklyn, New York native Teofimo with an injured right shoulder, which greatly hindered his performance on the night.

Lomachenko days after the fight on his shoulder, and he’s now said to be recovered.

Teofimo had problems when pressured

You can argue that Lomachenko created the perfect blueprint to defeat Teofimo by using pressure and forcing him to fight hard for the full three minutes of each round.

Being a HUGE fighter for the 135-lb division, Teofimo can’t fight hard when under pressure, which Lomachenko was doing in rounds 7 through 12.

We saw Lopez lose it quickly when Lomachenko started pressing him, and it was lucky for him that he had a wide lead from the first half of the fight.

In a contest, a lot closer than the scores handed down by the three judges in Las Vegas, Nevada, Teofimo (16-0, 12 KO) defeated Lomachenko (14-2, 10 KOs) by a 12 round unanimous decision to become the unified lightweight champion.

The judges had it scored very, very wide in giving the 23-year-old Teofimo the victory by this margin:

Boxing News 24 had Teofimo winning by a 115-113 score, and only because Lomachenko didn’t start throwing punches until the second half of the contest.

What’s interesting about the Lopez-Lomachenko fight last October is that when Lomachenko did start pressing the contest beginning in the seventh, Teofimo immediately started gassing out and looking badly stressed.

One could see that Teofimo was flustered from the pressure that Lomachenko was putting on him, and he looked hurt, worried, and closed to being knocked out.

It’s painfully obvious that if Lomachenko was entirely healthy for the fight, he would have whipped Teofimo and knocked him out by the midpoint in the fight. For that reason, it’s not surprising that Lopez is completely against the idea of fighting Lomachenko again.

Lopez to fight Kambosos Jr next

Instead of Lopez facing Lomachenko a second time and making A LOT of money, he’s expected to defend against his IBF mandatory George Kambosos Jr. in March or April. 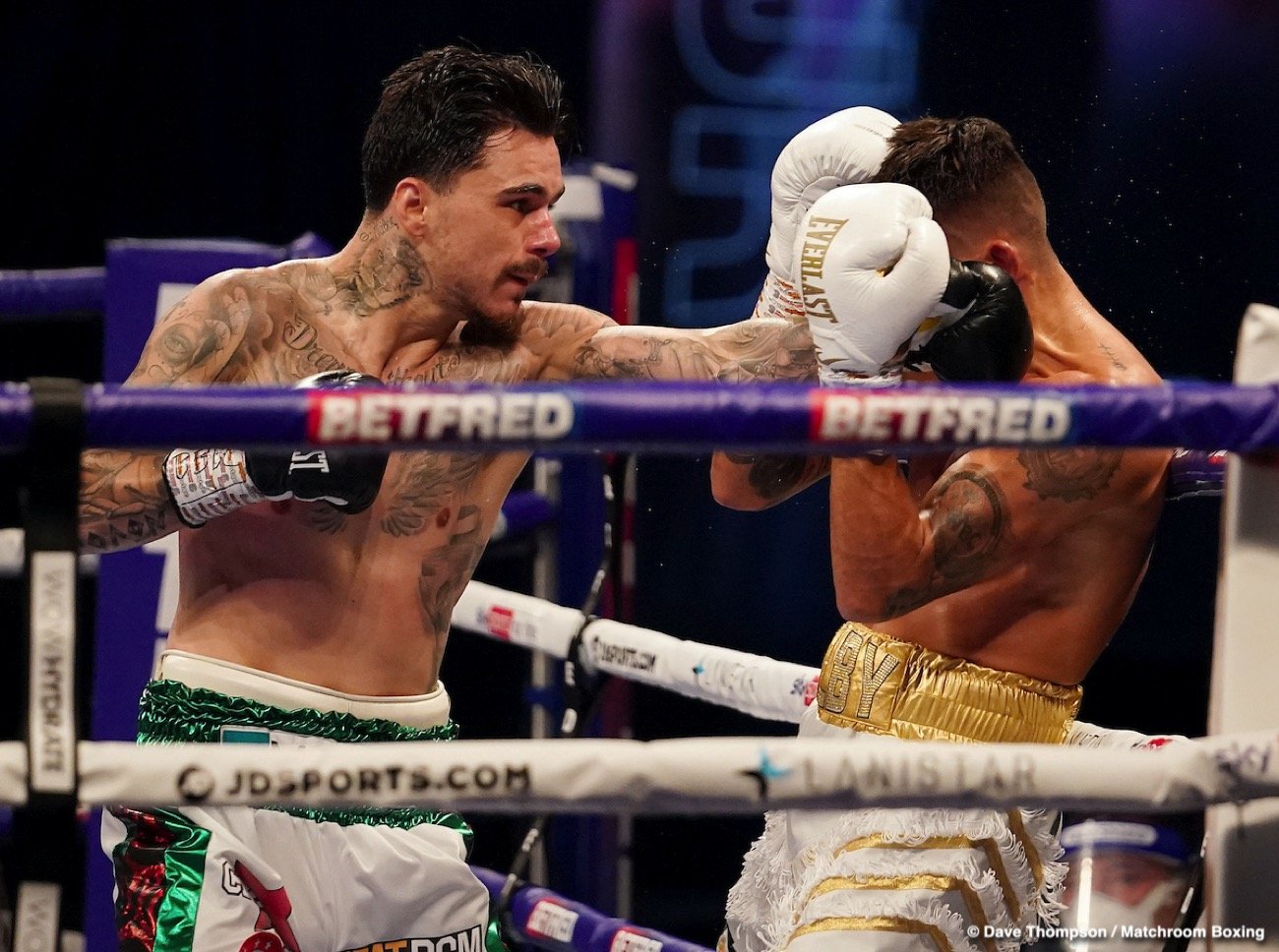 Few casual boxing fans have ever heard of the little known Australian Kambosos Jr., and for good reason; he hasn’t fought anyone of note during his career.

So basically, Kambosos Jr. is a ‘safe fight’ for Teofimo to milk his IBF/WBA/WBC/WBO lightweight titles against in March or April. The ratings for ESPN will likely be dreadfully poor for the Lopez vs. Kambosos Jr. due to the Australian being unknown to American boxing fans.

It’s a bad career move for Teofimo to fail to take advantage of the momentum that he had from his upset win over the injured Lomachenko, but it’s understandable.

Teofimo is choosing to take on an opponent that he knows in his mind that he can beat 100% in Kambosos Jr. rather than face a healthy Lomachenko and likely get exposed and knocked out. It’s very strategic of Teofimo, but it’s also disappointing because he’s clearly ducking Lomachenko.

“No need because we could do it a hundred times and Teofimo comes out victorious a hundred times,” said Lopez about him not being interested in giving Lomachenko a rematch.

Has Teofimo lost his ambition?

Teofimo is showing classic signs of what happens to a fighter after he tastes success on a major scale. What we see in a lot of situations with fighters – or anyone that achieves something special – is they lose their ambition, and stop working hard. 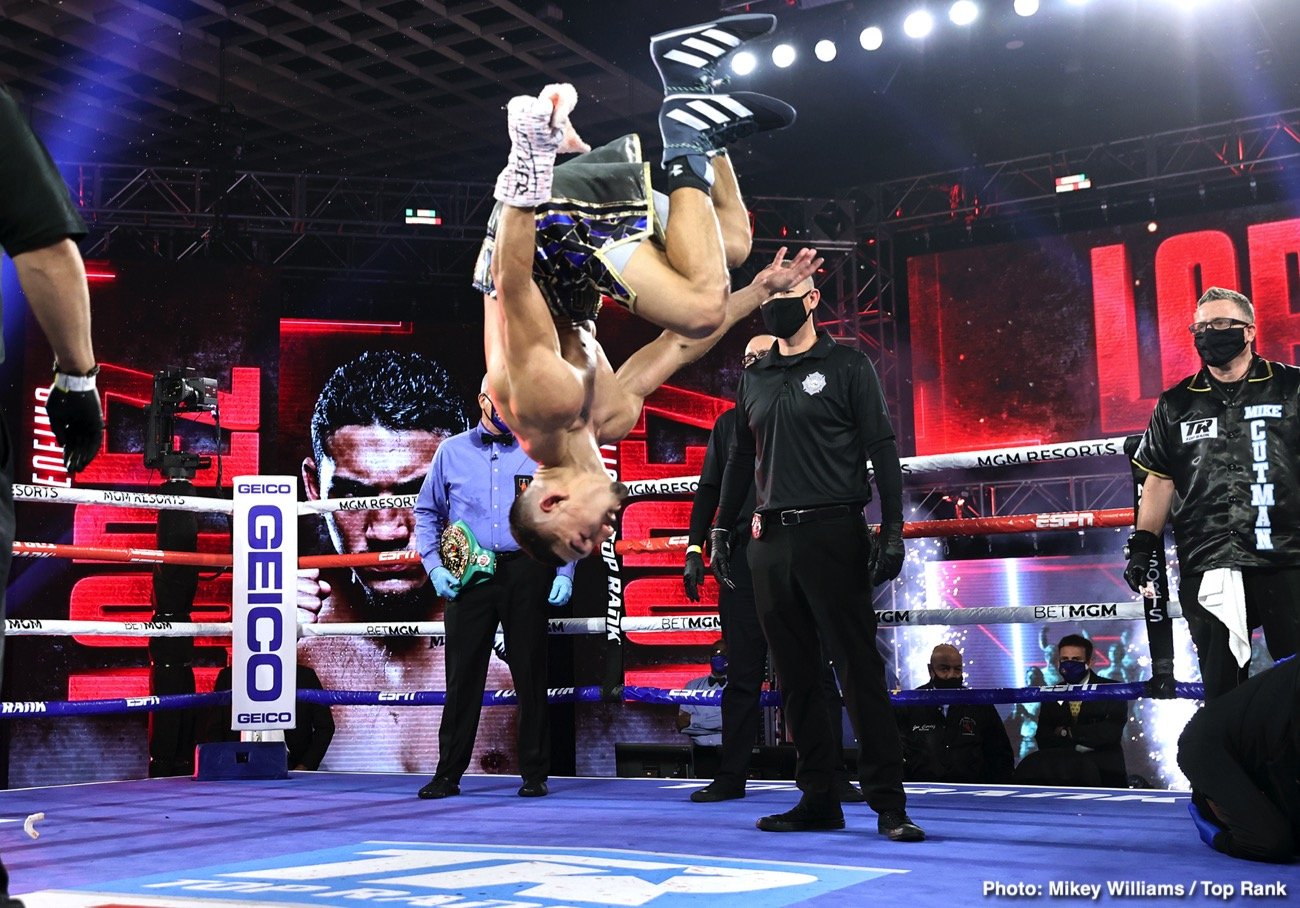 We saw that with Tyson Fury and in all sports. A lot of athletes sit on their laurels after they make it big, and get a taste of the money that success brings them.

It won’t be surprising if Teofimo’s career begins to go downhill soon, especially when he moves up to 140 and begins fighting opposition the same size as him. The perception many boxing fans have about Teofimo is he’s a ‘weight bully,’ a fighter that is fighting in a division below his body size.

Teofimo can get away with that right now because of his youth. Young fighters are able to melt down and fight in weight classes below their natural size, and then rehydrate up in weight to bully their smaller opponents.

In most cases, fighters can only do that when they’re young, as it’s too hard on their body as they get older in their late mid to late 20s and early 30s.

“Six months to a year I see myself, and if not that’s why I’m still trying to stay as active as possible,” said Teofimo giving his estimate about how much time he has left at lightweight.

Teofimo could have problems at 140

Well, if Teofimo is going to aim low in his remaining fights at 135, he might as well give up his lightweight titles and move up to 140 right away. If he moves up quickly enough, he’ll be able to fight both Jose Ramirez and Josh Taylor.

I think it’s unlikely that Teofimo beats either one of those two talented fighters because they have better engines than him, and they’ll know how to beat him.

Now that Lomachenko has exposed Teofimo with the blueprint that he created last October, Taylor and Ramirez will follow it to defeat him if he dares to fight them.

The fact that Teofimo is choosing to stay at 135 to take a nothing fight against the obscure fighter Kambosos Jr. greatly suggests that he’s waiting for Ramirez and Taylor out until they leave the 140-lb division and move up to 147.

Once they’re gone, the only guy that Teofimo would need to worry about at 140 is Regis Prograis, who was recently beaten by Taylor. 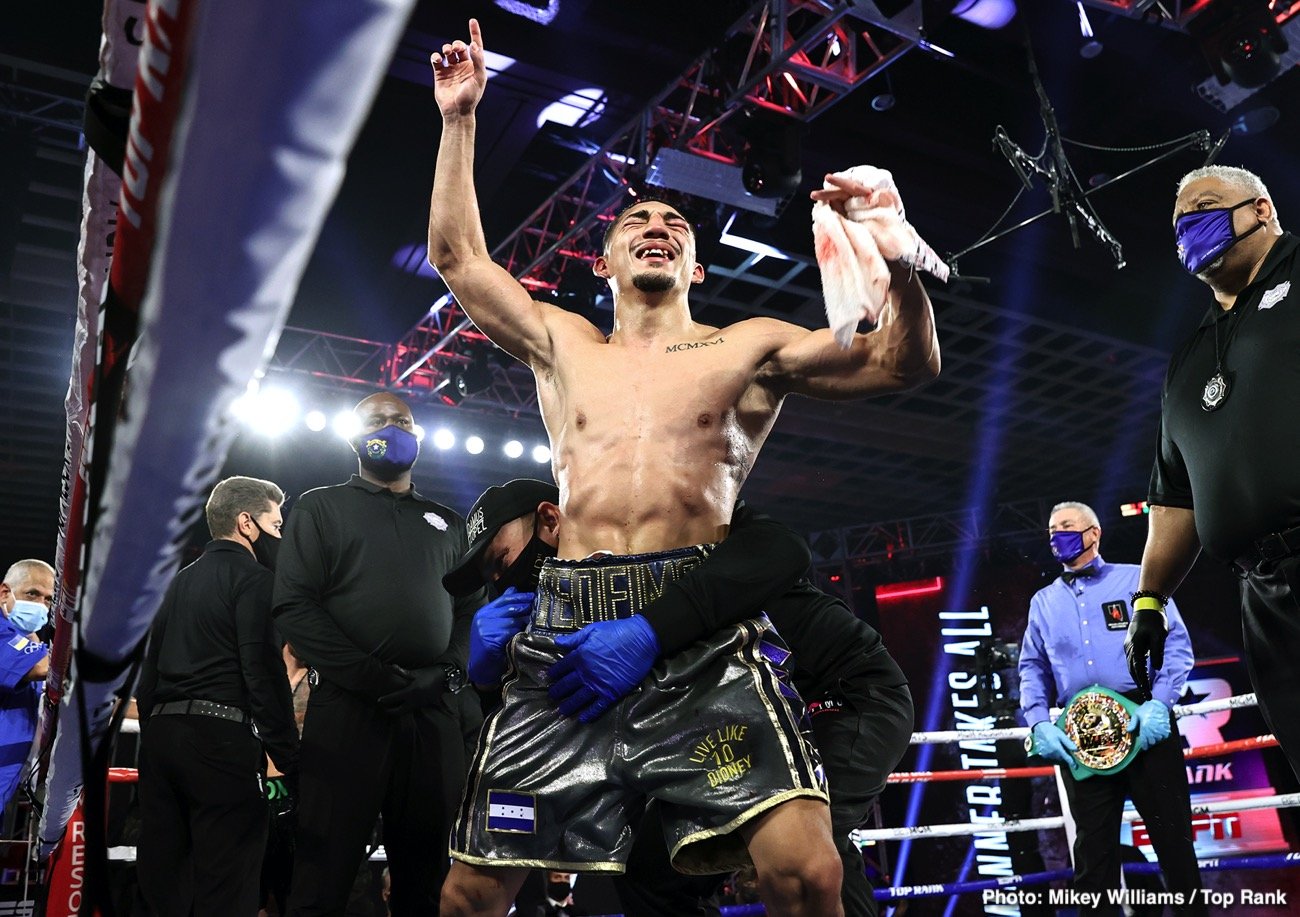