Lee is on cloud nine after Fury’s win over Wilder last February, but he may come crashing down if the Bronze Bomber avenges his defeat with a highlight-reel knockout in the trilogy match.

As far as Lee is concerned, the third Fury vs. Wilder fight will have a similar result as their second clash last February. Fury stopped Wilder in the seventh round in that contest, and he made it look easy.

What happens with Lee if Fury loses to Wilder?

What Lee might not understand is that if Wilder doesn’t take the rematch with Fury, which is part of the contract, then he’ll likely get a far worse deal with a new set of negotiations down the road. It’s all well and good for Lee to think Wilder should put off facing Fury in his next fight, but if he does this, he’ll be losing out on a lot of money potentially.

It’s obviously no skin off Lee’s nose if Wilder skips taking the trilogy right now, as he’s not losing anything himself if he makes that move. But it’s a different story with Wilder.

‘The Bronze Bomber’ Wilder has already got the negotiation terms spelled out in the contract from the negotiations for their last fight, so he’s not likely to walk away from a third fight just because Lee thinks it would be a good idea.

Put it this way. If Wilder lands the same right hand that he knocked Fury out with in the 12th round in their first fight, it’ll produce a similar regular. The only difference is there probably won’t be a referee to give a count to Fury. They’ll stop it immediately when they see Fury out cold. In the aftermath of the loss, does Fury keep Lee or him the royal dump?

“We committed to a game plan that most people thought we were crazy, being aggressive and taking the fight to Wilder,” said Lee to Sky Sports News. “They felt that we were joking. But as I said, I felt like I was under some pressure there because I was responsible for him [Fury] hooking up with [trainer] Sugar Hill.

“We were so committed to that game plan. So I felt like there was such a huge responsibility for me. Had it not gone right, I would have been a huge part of the blame and taken a lot of the blame. Tyson Fury is a special, special fighter. How he trains and his mental strength.

“We speak weekly, but there’s not a whole lot to say because we’re in lockdown. He’s training. I’m sure you follow him on lockdown, and I’m sure you follow him in his workouts, which are quite entertaining. They’re quite inspirational as well. He’s training a lot; he’s staying fit. And as soon as we get the go-ahead, we’ll be back in camp,” said Lee.

The game plan that Lee and Sugar Hill put together worked for Fury last February, but it might not work if they use the same strategy again. If Wilder poleaxes Fury in the first round in the third fight, Lee may find himself getting a lot of abuse from the boxing world for having the 31-year-old Fury using a recycled game plan.

Wilder needs to get his confidence back

“I’d be surprised if he takes the fight with Tyson, right now anyway, because Tyson is looking so good,” said Lee.

“If I was in Wilder’s corner, or on his team, I would say, ‘Take another fight, maybe fight Andy Ruiz, or somebody else.’

“Get a win, get your confidence back up, and learn from the first fight. Try to improve, and then come back and fight Tyson again for the trilogy, because if they fight again, I can only see it going the same way, if not even more emphatic for Tyson.”

Lee can forget about Wilder stepping aside so that Fury can face Anthony Joshua next. If that’s the main goal for Lee saying that Wilder needs to get his confidence back first, then he’s wasting his time. Wilder and his team aren’t going to listen to Lee’s self-serving advice and back away just because he’s recommending that they do that.

Team Wilder is going to take that rematch, and they’ll be assuming that Fury will try and fight aggressively just like last time. While it worked for Fury in the second fight, it may not work for him in the third one. It’ll be interesting to see if Fury keeps Lee or sends him packing if he loses the trilogy match.

We know that Fury dumped his previous trainer Ben Davison after things didn’t go well for him against Wilder in their first fight in December 2018. We could see Lee or Hill get replaced if Wilder knocks Fury out in the third match. 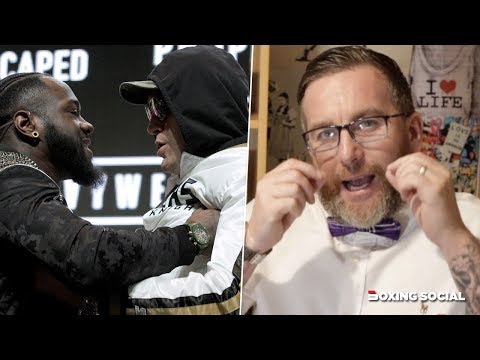 
« Ellerbe: Terence Crawford is #1 P-4-P, but Errol Spence BEATS him