Ellerbe: Terence Crawford is #1 P-4-P, but Errol Spence BEATS him

By Chris Williams:  Mayweather Promotions CEO Leonard Ellerbe says Terence ‘Bud’ Crawford is his #1 pound-for-pound fighter in boxing, BUT he feels that IBF/WBC welterweight champion Errol Spence Jr. will beat him. Unfortunately, being viewed as the #1 pound-for-pound in the sport doesn’t translate into being a star with the fans.

The current #1 pound-for-pound fighter Vasily Lomachenko is virtually a complete unknown with casual fans. They have no clue who Lomachenko is, and they likely never will. The guys the casual fans know about are fighters like Manny Pacquiao and Floyd Mayweather Jr.

Ellerbe states that ‘styles make fights,’ and he thinks that Spence (26-0, 21 KOs) has the perfect style to defeat the smaller WBO belt-holder Crawford (36-0, 27 KOs). Leonard isn’t the only one that believes Spence would be too much for the 32-year-old Crawford.

A great number of boxing fans see it the same way, especially after the way Crawford looked against Egidijus Kavaliauskas, Amir Khan, and Jose Benavidez Jr.  Crawford looked nothing like a star in any of those fights.

Mostly, Crawford looked like a counter-puncher, who did a lot of time-wasting things like moving and changing stances instead of letting his hands go.

Ellerbe says the business side of the Spence-Crawford fight will likely prevent it from taking place for a while. There’s not enough fan interest in seeing these two guys face each other for it to be worthwhile to make it. The hardcore boxing fans would like to see Spence and Crawford fight it out in a unification match, but the casual fans aren’t calling for it.

One reason for that is neither of these guys has enough wins over notable opposition for them to be well known.

“He’s supposed to say that,” said Ellerbe on social media is reacting to Spence saying he could beat a prime Floyd Mayweather. “I think Floyd would be disappointed if he said something other than what he said. We have the utmost respect for Errol.

“I know that Floyd has been a big fan of his since nine or tenth fights. He’s an excellent fighter. Errol is trying to become the best welterweight in the world. He has plenty of competition out there obviously, but he thinks he’s the best.

“He’s tough, and I can say this; people aren’t raising their hand to fight him,” said Ellerbe about Ugas. “It’s not that fighters are scared. It’s his style. He’s relentless, he’s very aggressive, and he always comes in great shape. He’s a real sharp, smooth fighter.

“These are extraordinary times in the welterweight division. Again, wishing Errol nothing but the best, but he’s supposed to say that,” said Ellerbe.

As great as a fighter Floyd Mayweather was during his career, he would have had problems against Errol Spence if he fought him in his prime. That single-punch style of fighting that Mayweather is known wouldn’t have worked with the relentless pressure that the bigger and stronger Spence would have put on him.

Crawford is #1 pound-for-pound in boxing – Ellerbe

“I think Terence Crawford,” said Ellerbe in revealing his pick for the #1 pound-for-pound fighter in boxing. “For what it’s worth, I’m not a big fan of the whole pound-for-pound ranking.

“We’re all about taking it to the next level and getting them [the fans] back. They can sit there and say, ‘This guy is the pound-for-pound [#1], but it’s all subjective. You have a lot of great fighters out there,” said Ellerbe.

Ellerbe rating Crawford as #1 pound-for-pound is a meaningless thing given that he’s never fought anyone good during his career. It would mean something if Crawford had beaten all the lions at 135, 140, and 147, but he hasn’t.

For some reason, Crawford moved through each of those three weight classes WITHOUT fighting the best guys. As such, you can’t say he’s number one in boxing in the pound-for-pound ratings, and he’s not proven himself as #1 at 147 either.

In looking at the competition that Crawford has fought since signing up with Top Rank, he’s clearly been matched against beatable fighters the whole way. All you can say is ‘bravo to Top Rank’ for the way they’ve carefully scheduled Crawford.

They’ve been able to get him this far in his career without losing, thanks to their careful match-making. But at the same time, the weak match-making has stunted Crawford’s career, keeping him from being the star that Top Rank wants him to be.

When you cut corners with a fighter, trying to turn them into a star with weak match-making, it hurts them in the long run because the fans aren’t impressed.

“I like Errol,” said Ellberbe when asked to pick between Spence and Crawford in a fight. “I think Terence is the best pound-for-pound fighter in the world, but I like Errol in that fight because styles make fights.

“The fans want to see that fight, and I think it’s a terrific fight between two excellent fighters, who are right there in the primes of their careers,” continued Ellerbe on a future fight between Crawford and Spence. “I think it’s a fight that who knows, maybe one day might happen.

“What people forget in this sport is that boxing is a business, and that fight would have happened if there was big business involved in that fight. The diehard boxing fans and I truly understand where they’re coming from, and more importantly, respect it, but there’s a business side to it,” said Ellerbe in talking about Crawford vs. Spence.

Spence can do everything that Crawford can do, but he does a far better job of winning his fights. You wouldn’t have seen Viktor Postol or Jose Benavidez Jr. make it to the 12th round against Spence.

“It’s hard to do buys,” said Ellerbe in discussing the difficulties of selling fights on pay-per-view nowadays. “We saw the last person doing a million-plus buys. We all know who that is. With piracy out there, it’s harder and harder to do big business as it relates to pay-per-view.

“There’s still a lot of money in the pay-per-view business, but doing those rediculous numbers unless you’re Floyd Mayweather, it’s very hard. I think the fans are having much more appreciation for the success that a guy like Floyd has had in the pay-per-view market.

“You look at a recent example of the Fury-Wilder fight. You had two excellent networks coming together, pumping it out. It still did a good number, but from an expectation standpoint, some people felt that it didn’t achieve the numbers that they had thought.

“I thought it did good business, but it’s just hard now. The marketplace has changed. You have to go back and evaluate every fight. When it comes time for that fight to get made from the business [aspect], it’ll get done,” said Ellerbe on the Crawford vs. Spence fight.

A lot of the fights that the promoters are trying to peddle nowadays are contests that have no business being put on pay-per-view in the first place. That’s the #1 problem.

The number two problem is the promoters aren’t putting their fighters in with quality guys to build up their popularity enough for them to fight on pay-per-view. When you see Crawford fighting Amir Khan on pay-er-view, you wonder what’s going on. Neither guy has a big fan base in the U.S, and one of them is considered over-the-hill. It was an insane idea to put Crawford-Khan on PPV at this point.

Kownacki: Who has Crawford fought?

“Who has he really fought?” said heavyweight Adam Kownacki to Fighthub in talking about Crawford. “He’s a great fighter, and he’s good, but where’s the competition? All the great fights are being made on FOX for the top guys. It’s sad, but you got to fight the top competition.

“On PBC, you’ve got the top guys fighting each other. You’ve got Manny Pacquiao, Errol Spence, Keith Thurman, and everybody basically. Hopefully, the fights get made, and that’s why it’s up to the promotions. I guess he [Crawford] signed with the wrong guy, you know?” said Kownacki about Crawford. “They have no competition for him,” said Kownacki on Crawford, having no one to fight with Top Rank.

Heavyweight contender Adam Kownacki is saying about Crawford what a lot of boxing fans have been saying. Who has Crawford fought? He looks good beating B-level fighters like Jeff Horn, Khan, Benavidez, and Kavaliauskas, but he’s never even faced an A-level guy during his 12-year pro career. Crawford is about to turn 33, and it’s getting late in his career for him to be still facing B-level guys.

It’s not expected to get better for Crawford, as his next opponent could be the shot to pieces Kell Brook. That’s not going to help Crawford’s popularity. He might even lose to Brook, and that’s the sad part. 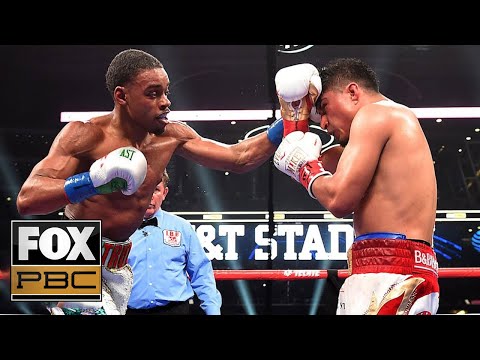 
« Berchelt, Navarrete and Nery in action in June in Mexico