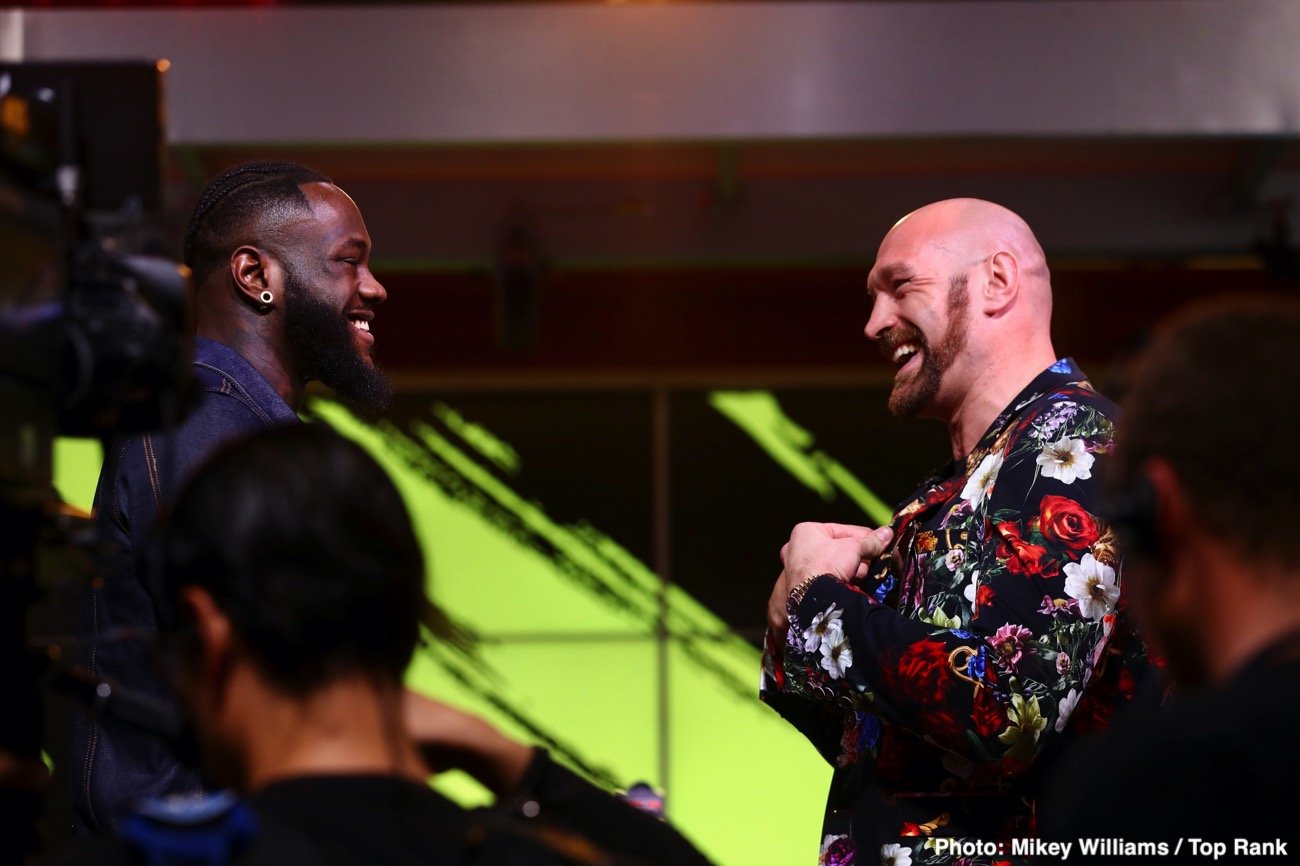 By Charles Brun: Tyson Fury says Wladimir Klitschko was a harder puncher than Deontay Wilder. Fury (29-0-1, 20 KOs) says that even though Wladimir never knocked him down, he still hit harder than Wilder (42-0-1, 41 KOs).

Lineal heavyweight champion Fury was knocked down twice by Wilder in their fight in December 2018, and he was knocked cold in the 12th. Fury says it was Wilder’s hand speed that caused him problems in him getting knocked down in the 9th and 12th rounds.

Without Wladimir and Wilder being at the same place and time back in 2015 for the two to be tested on a punching machine, there’s no real way of knowing which of them hit harder. All we can say for sure if Wilder knocked Fury down twice, whereas Wladimir couldn’t put him down. Further, Wilder’s 95.35% percentage is superior to Wladimir’s 76.81%.

Wilder will be defending his WBC heavyweight title against Fury in six day from now on February 22 on Fox Sports PPV, ESPN PPV and BT Sport box Office.

“I took his best shot flush on the chin and I got back up,” said Fury to skysports.com. “I don’t think he punches harder than Wladimir Klitschko. Wladimir had a massive knockout punch and had more fights than Wilder.

“With Wilder, it’s not so much his power. It’s the speed that he lands at. It can be tricky when you don’t see it coming,” said Fury.

It’s possible that Wladimir hit harder than Wilder, but lacked the courage to fight as aggressively as him. If you review Wladimir’s fight with Fury from 2015, he looked incredibly timid, and afraid to throw punches.

Wladimir was gun-sky to the extreme, and not the same fighter without his trainer Emanuel Steward to motivate him to fight aggressively. With Wilder, he wasn’t afraid to throw shots at Fury, and was chasing him around the ring for 12 rounds.

It’s useless for a fighter to have more power if they’re afraid to use it, and Wladimir looked scared against Fury. It was a poor effort by Wladimir to say the least. He wouldn’t follow the instructions by his trainer Johnthan Banks or his brother Vitali Klitschko to let his hands go against Fury.

“I’d say a 50-50 fight, because Deontay, at any time, he can throw that right hand, and he can knock you out,” said Holyfield to Fighthub on the Wilder vs. Fury 2 rematch next Saturday. “But Tyson Fury, he’s a clever fight. He’s a good fighter. He’s got long arms and stuff like that. He got an awkward style that can make adjustments.

The safe pick is to call the Wilder vs. Fury 2 rematch a 50-50 fight. But if you go on how the two fighters have performed since their last fight against each other in 2018, Wilder has clearly looked the better guy. Fury had massive problems in his last fight against Otto Wallin after being cut in the third, and he didn’t do well with his pressure.

Wilder can end it with a one-two combination

“He’s a tall guy. There’s never been a tall guy like him who hit guys,” said Holyfield about Wilder. “When you’re talking devastating punchers, that’s no doubt. Mike Tyson was a good puncher, but at any given time, he’d get you out of there. You’ve got to give him credit for who he is. But you can’t go and say he’s the strongest one, because there ain’t no big guy that can throw it like him.

“It took a lot of experience for him to do that, and in that short period of time, he had to learn to do it. So it’s going to be lights out,” said Holyfield on Wilder.

If Wilder hits Fury with the right hand that knocked out Luis Ortiz and Dominic Breazeale, he won’t need to throw a combination. Fury will go down for the count if he gets hit with a shot like that.

Caleb Plant rules out Canelo Alvarez fight on May 2: Doesn’t want to be “OVERWORKED” »