Haney’s father Bill said that he plans on having Devin move up to 140, because they can’t get any of the top 135 lb fighters to have him. Hopkins wants Haney to stay busy at 135 to help make the the Ryan Garcia fight a huge affair when it eventually happens. Unfortunately, Haney can’t get the fights he wants in the lightweight division, so he plans on moving up to 140 go after Mikey Garcia, who said he WILL fight him.

Haney wants to fight Ryan Garcia BEFORE he gets exposed

Hopkins sounded like he was lost for words with the Haney’s both pressing him about wanting to make a fight with Ryan. Bernard let them know that Haney (24-0, 15 KOs) is being saved for Ryan’s last AFTER his next three opponents that he plans on fighting. Garcia wants to face Jorge Linares, Luke Campbell and Gervonta ‘Tank Davis in his next three fights.

Haney, 21, and his dad both looked unhappy after hearing Hopkins tell them that he’s being saved for later after Ryan’s next 3 fights. They obviously suspect that ‘Kingry’ Garcia will lose somewhere along the line in his next three fights. Whether it be Linares, Campbell or Tank Davis, one of those three has a good chance of exposing Ryan.

Once Ryan loses to one of them, then the interest in a Garcia vs. Haney fight will drop off sharply. It’ll still be a big fight, but not like it would if it took place right now with Ryan still undefeated. Ryan is obviously a good fighter, but he’s one-dimensional, and his offense is very limited. He just looks to throw left hooks.

When Garcia’s not throwing left hooks, he’s stepping away, trying not to get hit. That fighting style will only take you so far in the upper levels of the sport, and Haney likely knows that.

“Ryan Garcia right now is considered a superstar, and he’s considered a champion respected, based on the followers and viewers and 3 million Instagram followers. We saw it tonight, and I say Instagram for a reason to set this up. Watch the grand slam.

“I’ve got the first base loaded, I got the second base filled, I got the third filled. The bases are loaded, and the fourth man is coming up to hit the ball [he’s coming to bat]. Now he’s [Ryan Garcia] proved with a worthy opponent [Fonseca] that’s some say, ‘Hold, wait a minute, not this guy. He’s not an Instagram champion.’”

Devin Haney: “Who did he beat?” said Devin about Ryan Garcia in making it clear that Fonseca isn’t an elite level fighter. “We don’t know anybody that Fonseca beat.”

Hopkins: “Before it was just talk. Now it’s time. Did you just see what happened tonight?” said Bernard on Ryan’s win over Fonseca. “

Hopkins: “You make it seem like this guy was somebody didn’t know. Did you see talent?”

Haney: “Of course, I know he’s [Ryan] got talent. I knew Ryan before everybody knew Ryan.”

Hopkins: “That’s what I’m saying. Through the amateurs, you guys knew each other. Is Ryan Garcia a worthy conversation in today’s boxing in 2020 as one of the primary guys in your weight division that’s heading towards superstardom?”

Haney: “I think that Ryan is a star for sure, but Fonseca wasn’t a worthy opponent. Fonseca hasn’t beaten ANYBODY. He lost to Tevin Farmer and he lost to Tank Davis. That’s the only fights we know him for.”

Hopkins: “Let me ask you a question. So you’re saying if he [Kingry Garcia] beats you, he’ll get that approval.”

Haney: “He would never beat me.”

Hopkins: “So it’s got to be somebody like you to get that approval?”

Haney: “Why did he [Ryan] say he was going to fight everybody? Luke Campbell and Linares?”

Hopkins: “You’re the best of the guys he [Garcia] mentioned. I agree with that. Of the guys he mentioned. That’s smart. If I was him, I’d say, ‘Look, I want to fight all these guys that are dangerous. I still can’t sleep on them, but you become the climax. You become the fight to watch. That’s the build up. Everything must have a build up before it explodes. You need that,” said Hopkins to Haney on his desire to let the Garcia-Haney fight marinate.

Bill Haney: “Let me make an announcement then. If we cannot get no fights at 135 from nobody, then we will be going to 140.”

Hopkins: “Well, you can always come back down always.”

Bill Haney: “We’re going to go up and come back down when they’re ready. I’m serious. Mikey Garcia,” said Bill when asked who Devin Haney wants at 140?

Hopkins: “You stay tuned. It’s going to be Linares [next for Ryan Garcia], because it’s been talked about. Both guys got to show what they were worthy, and what they did tonight, especially Linares. It’s a fight you can’t pick right now.

“I got to go 50-50 fight now [for the Ryan Garcia vs Devin Haney match] based on his last performance and Ryan’s performance. He’s [Haney] going to fight again before they fight. There should be one fight, get that belt, and get Linares out of the way. You got momentum. This is business too. You got to get people excited,” said Hopkins on the Haney vs. Ryan fight.

“Anybody in the division champion or not champion is going to have problems sleeping tonight because they’ve got to figure out what else does he have in his arsenal other than the power than other people thought he didn’t have,” said Hopkins on Ryan Garcia.

“This was a statement fight to all fighters out there, young and middle-aged,” Hopkins continued. “Take a page out of the young goat Ryan Garcia. This isn’t a promoter talk. This is something I’ve been proud of co-signing for anything I say. This here for Ryan was a ‘SHUT your mouth for anyone out there that wants to keep it open on the negative.

“This is all positive energy. You’ve got to look at his corner, you’ve got to look at his teacher,” Hopkins said on Ryan’s new trainer Eddy Reynoso. “You never got comfortable. It’s alright to be pleased, but not comfortable. Can you imagine that people in that weight class ain’t going to sleep for two days. Why are they going to do that? Now they’re really ain’t going to go to sleep,” said Hopkins on Ryan Garcia.

Bernard is trying to inflate the magnitude of what Ryan accomplished in beating Fonseca last Friday night by trying to make it appear that he beat a big name. Going into this fight, Fonseca wasn’t a highly rated fighter at 135.

Fonseca wasn’t a former world champion, and he’d never beaten anyone well known. Fonseca’s main claim to fame was losing to Tevin Farmer and Gervonta Davis. Aside from that, Fonseca’s past wins on his resume were exclusively against obscure opposition. Fonseca was coming off of a 12 round draw against Alex Dilmaghani last November.

Hopkins talks on Ryan Garcia’s shoes being too big

“He made the adjustments. You still got to fight,” said Hopkins in talking about Garcia’s boxing shoes, which were too big for him last Friday. “You’re talking about your shoes. He knew his shoes didn’t fit before he even went out there in the ring. And he knew that his shoes the day before in the dressing room, but the mentality of this old soul with the young mentality.

“He knew it wasn’t perfect going out there,” said Hopkins on Ryan. “The shoes were a little too big or an inch too big, right? He said, ‘I still got to take care of business’ without having that in his mind as an excuse What happens next? He went out and executed. And he went out and took that negative and made it into a positive for what? A KO.

“For him to be in the era he is right now, for him to even mention Ray Robinson, and to be able to say that he respects Ray Robinson,” said Hopkins in talking about Ryan’s mention of boxing great Robinson.”One of Ray Robinson’s deadly weapons was a left hook coming from the ground where you don’t see it face by face. It’s coming from here [the ground], and it’s coming over the top,” said Bernard.

Hopkins is making a big deal about Ryan’s boxing shoes being a little bit too big for him for the Fonseca fight. To even talk about that as much as Hopkins did, it sounds like he was really grasping to find something to make Ryan look courageous. When you’re matched against a lower level fighter like Fonseca, it doesn’t matter if your shoes are too big, too small or too wide. The fight is still a mismatch.

“It has to be on point, and it has to be right timing. Your body has to be at the right place to make it connect,” said Bernard in talking about Ryan’s left hook. “That’s why it completely shut the lights out. This wasn’t a thing where you’re staggering.

“I think this was scary where the referee doesn’t count, and that means, ‘attend to the patient.’ This guy became a patient,” said Hopkins about Fonseca. “I like that. Everybody at home, I hope you’re safe, and OK tomorrow. They didn’t know you, but now everybody knows you,” said Hopkins.

The knockout by Garcia over Fonseca was scary to watch, but that kind of stuff happens when you’ve got a mismatch. Fonseca wasn’t showing any signs at all of guarding against Ryan’s left hook.

Normally a good fighter will keep his right guard up to block the left hooks when they come forward. Fonseca wasn’t doing that. He was coming forward trying to land lead rights. It was only a matter of time before Ryan eventually caught Fonseca with his main and perhaps his only weapon in his arsenal with his left hook.

“Watch all my videos. I was using only one hand,” said Ryan about his right hand being injured the entire camp. “We have that mentality. Why I don’t give excuses? Because nobody gives a f— about it. Nobody cares. I could have made a million excuses, but nobody gives a f—-. They want me now, huh, Bernard? We turned up on them,” said Ryan Garcia.

Of course, no one cares about Ryan’s shoes being too big. He’s really showing his youth here in thinking that boxing fans would give him sympathy because his shoes were a little too big. All they care about is that Ryan won the fight. All the other stuff is meaningless. 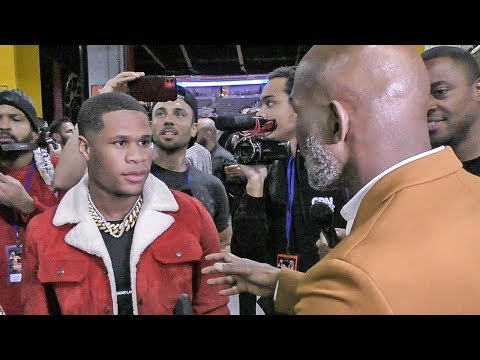 David Benavidez reacts to Caleb Plant’s win: THREATENS to put him in Hospital »