Vasiliy Lomachenko vs. Teofimo Lopez planned for May

By Jim Maltzman: Bob Arum says that the highly anticipated unification fight between Vasiliy Lomachenko and Teofimo Lopez will be taking place in May, possibly in New York at Madison Square Garden or in the Middle East, according to @StevESPNKim.

IBF 135lb champion Teofimo (15-0, 12 KOs) has been quite clear about where he prefers the location of the fight to take place. The 22-year-old Lopez wants to fight in his hometown of New York at Madison Square Garden, but he understands that Lomachenko (14-0, 10 KOs) doesn’t want to fight there.

With Teofimo’s power, he has an excellent chance of stopping Lomachenko. The brute strength and the youth of Teofimo could be too much for the aging 2-time Olympian Lomachenko.

“It’s my home and the mecca of boxing, and I think it’s a great place to have it, but it’s really not my decision,” said Lopez to ESPN.com in talking about his preference for the location of the Lomachenko fight. “Loma doesn’t want to fight in New York, so obviously it will be somewhere else. Probably in Las Vegas or Dubai or somewhere in Europe.”

Lomachenko, 31, was fine with fighting Luke Campbell in London, England in his last fight on August 31, but he had ulterior motives for doing so. Loma wants to win over a new market in the UK. With that in mind, the popular 2o12 Olympic gold medalist Campbell was the perfect opponent for him to fight. Lomachenko still hasn’t become a star in the United States, but it’s unclear he cares enough to try and become a star in that country.

You can argue that it’s a lot harder to become a big name in the U.S, considering that the American fans prefer to see fighters going to war. Lomachenko doesn’t like to fight like that, owing to his amateur background. No fighter likes to get hit, but Lomachenko REALLY doesn’t like it. He’ll go out of his way just so he doesn’t get hit, which makes his fights boring to watch at times.

To become a star in the U.S, Lomachenko would need to be more aggressive, and willing to stay in the pocket. He also needs to more trash talking, and that’s something he sees unwilling to do.

Lopez wants to move to 140 to fight Jose Ramirez & Prograis

“After beating Lomachenko, he would be the undisputed world champion at 22 years of age, God willing, and then, maybe someone like José Ramírez or Josh Taylor at 140.,” said Lopez in talking about his plans for the future.

“Even Regis Prograis. Big names, top boxers who are feared. After 140, when I probably have everything in that division, I’ll go to 147,” said Teofimo.

At 5’8″, Teofimo has the size and the punching power to fight at 140, and take on the lions in the division like Josh Taylor and Jose Ramirez. Those would be simple fights to make, since Taylor and Ramirez are both signed with Top Rank. Former WBA light welterweight champion Regis Prograis (24-1, 20 KOs) would likely be an easy fight as well, because he’s a warrior. He wants to fight anyone in the division, and he wouldn’t shy away from a match against Teofimo.

Teofimo willing to take risks with his career

With the politics of boxing, Teofimo could be shut out from getting fights against the top lightweights like Devin Haney, Ryan Garcia and Gervonta ‘Tank’ Davis. Staying at 135 sounds great, but there aren’t a lot of options for Teofimo in that division. His goal is to become a star, and he’ll be held back if he stays at lightweight for too much longer.

It’s fine for Lomachenko to fight at 135, because he doesn’t appear to be as ambitious as Teofimo. Loma is definitely not as much of a risk taker as Lopez. We’ve seen that with Lomachenko’s unwillingness to move up to 140 and 147 to take on the big names like Manny Pacquiao and Terence Crawford. 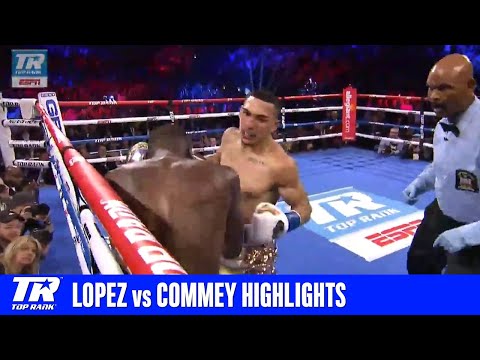