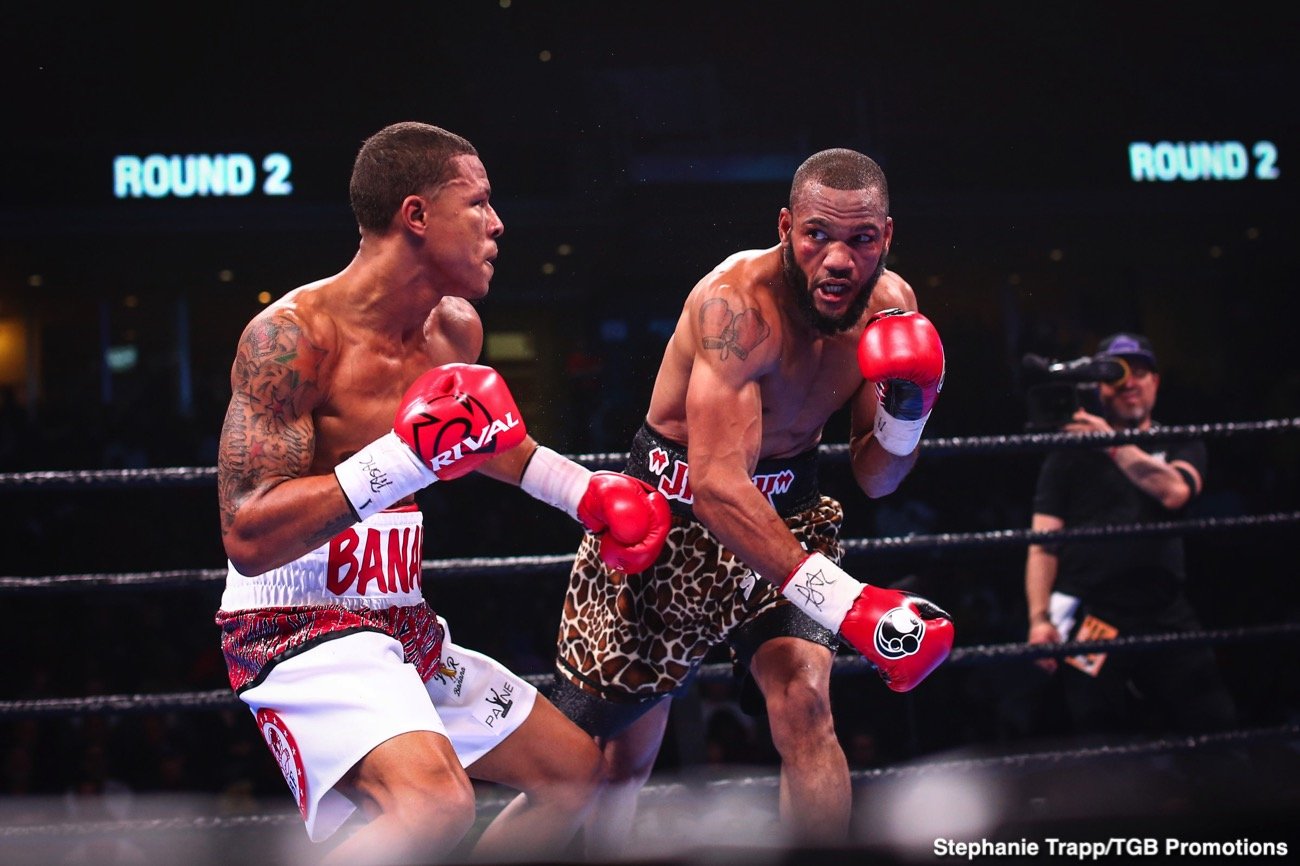 By Barry Holbrook: Julian “J-Rock” Williams says he’s got a rematch clause in his contract from his fight last Saturday against Jeison Rosario, and his plans on using it to face him again, Williams (27-2-1, 16 KOs) lost his IBF/WBA junior middleweight titles to Rosario (20-1-1, 14 KOs) by a 5th round TKO in what was an optional defense at the Liacouras Center, in Philadelphia.

Williams was cut over his left eye in round 2, but he had problems from that point forward in the fight. To his credit, he didn’t blame the cut for his defeat to Rosario.

Williams lost to the better man, and he lose to him again if he’s serious about his intention of exercising the rematch clause. It may not be the smartest thing for Williams to fight Rosario immediately, but that’s what he likely will be doing.

Williams left himself open for a counter

The match was close through the first 4 rounds, but Rosario quickly put Williams away in the 5th round after hurting him. Williams was too hurt to recover after getting nailed by an uppercut from Rosario. The way that Williams was hurt by Rosario was identical to his fight with Jermall Charlo in 2016.

In both fights, Williams landed a huge right hand, but was countered immediately by shots that he didn’t see. Williams never recovered against Charlo and was stopped in the 5th round, and the same thing happened last Saturday against Rosario.

J-Rock got careless in the fifth both times, and he paid a heavy price. His problem is he over commits to his right hand by loading up too much on it, and leaving himself open to counters.

This was supposed to have been a safe fight for J-Rock,’ but it turned out to be anything other than that. The 30:1 underdog Rosario knocked Williams down in the 5th, and stopped him in a fight shown on FOX PBC Fight Night on Fox Deportes.

J-Rock not surprised at how good Rosario was

“I wasn’t surprised he was so good,” said Williams. “And I told everybody he’s a real fighter. I have to accept it. The cut blurred my vision a little bit but it wasn’t the reason why I lost. He was the better fighter tonight. We’ve got a rematch clause. I’ll see him again soon. I’ll be back.”

IBF/WBA welterweight champion Errol Spence Jr. was impressed with what he saw from Rosario. A lot of people were impressed long before he stopped Williams, as he was showing a lot of skills and nice power.

The punch variation that the 24-year-old Rosario displayed was more complex than what we typically see from the top fighters. Rosario did a good job of changing things up with the type of shots he was hitting Williams with, and he never seemed to figure out what he was doing.

That mf rosario can fight!

Rosario landed 65 of 286 shots for a 23% connect rate, according to CompuBox’s stats. The 29-year-old Willians connected 58 of 239 for a 24% connect rate. There wasn’t much to separate the two from each other in terms of shots landed and the percentage rate, but Rosario’s punches did a lot more damage.

Rosario has several possibilities for next fight

If Williams forces the rematch, then him and Rosario will be meeting up later this year in a second fight. Barring that, Rosario could potentially fight former IBF/WBA champion Jarett Hurd in a compelling match-up that would interest a lot of boxing fans.

It would obviously be in Rosario’s best interest to get the arguably easier fight with Murtazaliev out of the way before he faces Williams again or takes on Charlo.

« Angel Garcia sends message to Pacquiao & Spence: ‘Have contract in ring for Danny’ to sign next Saturday