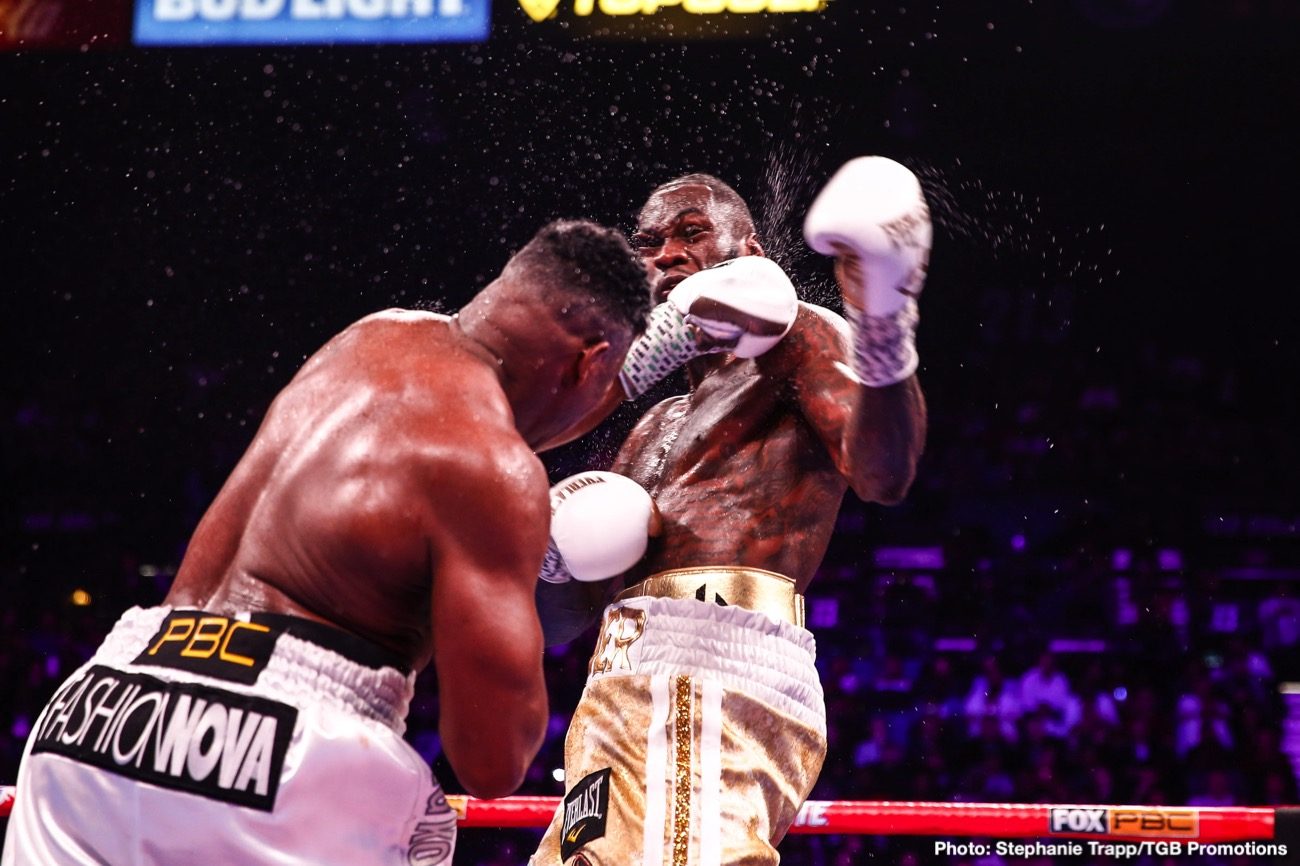 By Charles Brun: Deontay Wilder’s victory over Luis Ortiz didn’t impress Tyson Fury’s trainer Ben Davison. He thought Wilder would fight “smarter” than he showed, and he failed to beat him in a “beautiful way”. Davison says Wilder didn’t look good against Ortiz because he was feeling the “pressure” from his rematch with Fury in February.

The conventional wisdom is that Wilder is going to easily overpower Fury, and knock him out cold in their rematch. Fury is seemed to have lost his senses completely with him doing WWE, and looking to branch into MMA. He has all things going on, and he’s not dialed into boxing the way he needs to.

Wilder has already told the media that Ortiz is a BETTER fighter than Fury, and tougher than him as well.

Davison says WBC heavyweight champion Wilder defended a title that doesn’t belong to him. It belongs to Fury (29-0-1, 20 KO) from his fight against Wilder last December.

The match was scored a 12 round draw, but Davison believes that Fury deserved the win. He doesn’t agree with the decision, but unfortunately he’s powerless to change the results. Fury will need to live with that draw until he faces Wilder in their rematch on February 22.

Davison was on a special scouting mission on Fury’s behalf to find holes in Wilder’s game that he can take advantage of. Wilder and Fury are fighting each other on February 22 in a rematch, and Davison is trying to find flaws.

Wilder (42-0-1, 41 KOs) was behind on the scorecards when he launched a textbook right hand that knocked out Ortiz (31-2, 26 KOs) last Saturday night at the MGM Grand Garden in Las Vegas, Nevada. It wasn’t a beautiful” performance by Wilder like Davison wanted it to be, but it worked good enough to please the fans.

Wilder gained more attention from his knockout of Ortiz than Fury did in laboring to a 12 round unanimous decision over Otto Wallin last September. The U.S boxing fans prefer to see knockouts, and Wilder gives them what they want.

“Look, he done pretty much what we said he would do,” said Davison to Sky Sports. “Yes, he lost rounds, but Luis Ortiz was walking into distance, and it was a matter of time before Deontay Wilder found that shot. We’ve seen it before. It’s nothing new. Fair play, he’s defended his belt, but he’s not defended the belt in my eyes.

“He’s defended a belt that belongs to Tyson Fury,” said Davison about Wilder. “Luis Ortiz is a fantastic fighter, but he’s NOT Tyson Fury. I also learned that it was a different man Deontay Wilder to when he fought Tyson. And I think Tyson 100% got under his skin. I definitely saw in there, which is understandable.

“The pressure of a big fight around the corner affected him, but people will say he looked poor. He took his time, and he done what he was supposed to do. Obviously, it’s something you’ve got to try to negate,” said Davison about Wilder’s power. Tyson is the strongest fighter mentally that I’ve ever seen in history, and he proved that on a number of occasions,” said Davison.

It sounds like Davison was expecting a different Wilder than the one that we’ve seen for the last 10+ years. Wilder doesn’t need to change much, because he’s knocking everyone out.

Wilder defended a belt that doesn’t belong to him – Davison

“How do you do it? I’m not going to say how I would do it, but it’s definitely now how Luis Ortiz just did there,” said Davison in refusing to give the game plan for Fury against Wilder. “But fair play to him, but he had a good go, and he got complacent and walked straight into distance. That’s a recipe for disaster. Somebody texted me, saying, ‘3 down, 4 down,’ and I said, ‘Yeah, can he maintain it though?’

“I knew he wouldn’t be able to maintain it. Fair play to Wilder for defending the belt, but he’s not defended a belt that’s belonged to him,” said Davison.

Ben might not respect the judges’ decision in scoring the Wilder-Fury fight a draw, but he’s going to have to accept it. Fury didn’t win, and the reason he didn’t is obvious. He was knocked down twice. You don’t win fights when you get knocked down. It’s surprising that Davison didn’t mention Fury’s two trips to the canvas, since that’s a pretty important thing.

As a trainer, you’ve failed your fighter if he gets knocked down twice. Why Fury chose to keep Davison as his trainer after the Wilder fight is unlear. The wise thing would have been to dump him, and find someone with more ability to help him on defense.

Otto Wallin had Fury bloody and battered in their recent fight, and the fight should have been stopped. The ringside doctor let the contest go on, but he didn’t do Fury any favors. He would up needing 46 stitches to close his cut.

If they had stopped the fight shortly after the cut opened in the third, he might have had fewer stitches. Wilder has already said repeatedly that he’s going to be targeting Fury’s cut.

“Wilder didn’t do it in the most beautiful way, but he was taking his time,” said Davison to Boxing Social in talking about Wilder’s win over Ortiz. “He knew Ortiz would slow down, and I could see he was starting to slow down. I thought it was a matter of time before he ran into that right hand. That’s what happened. I thought Wilder would be a little more smarter in terms of making Ortiz work and think.

“Make him basically tire out quicker, but he didn’t know how to do that,” said Davison in criticizing Wilder for how he fought Ortiz. “So I wasn’t overly impressed in that department. He has done what he was supposed to do, took his time, found the shot and got the job done. I didn’t score it round by round, but Ortiz was obviously in front. Ortiz has done basically what he done in the first fight,” said Davison.

Most boxing fans predicted that Wilder would knockout Ortiz, so it’s not surprising that Davison did too. The way Davison talks, he seems to be padding himself on the back for getting his prediction right, but it was obvious Wilder was going to stop the fight. Wilder has a knockout percentage of 95.35%. With a percentage that high, you’re going to knockout most fighters.

“I think the pressure of a big fight looming effected Wilder, his tactics and his game plan,” said Davison in giving his opinion that Wilder was looking passed Ortiz towards his rematch with Fury.

“If 10 percent of your mind is on what’s coming next, 10 percent at that level is a big percentage. So that definitely effected him. Like I said, he took his time, he done what he was supposed to do, and he found the right hand.

“Listen, I picked up a few things just seeing how he dealt with things, even in the week leading up to the fight. Maybe you don’t take nothing from it, but maybe you do. One percent can sometimes be the difference.

“Not yet. It’s obviously early hours over there, but I’ll have a chat when I get back,” said Davison when asked if he’s talked to Fury since the fight ended. It’s boxing, and a job whether it’s Wilder or anyone else. Looking forward to getting to training camp, preparing and looking forward to Tyson getting another win,” said Davison.

Wilder isn’t acting like he’s worried about the Fury fight. On the contrary, he seemed to be having the time of his life before, during and after the Ortiz fight last Saturday.

Instead of Davison and Fury wasting energy in trying to throw Wilder off his game, they should be training, and improving. Fury is the one that was knocked down twice by Wilder. He’s the one that needs the most amount of improvement for the second fight.

Davison not sure where Ortiz goes from here

“Listen, he’s achieved out of the sport in fighting for a world title, and not too many people get to do that. I’m sure with what he’s been able to achieve financially, he’s able to give his daughter a better life. You can only applaud that and respect that,” said Davison about Ortiz.

Ortiz’s management will need to try and rebuild him to get him pushed up the rankings. There are a lot of fighters Ortiz can face. There’s no point in Oriz retiring, and he already said he’s not going to.

“My career is not over. I’m going to work my way back into a big fight,” said Ortiz. 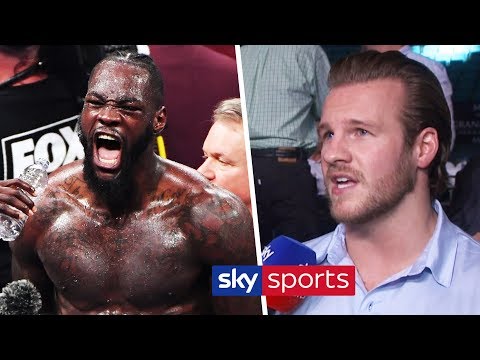 
« Hughie Fury will get world title shot in 2020 says trainer

Xu Can dares Josh Warrington to fight him »