Hughie Fury will get world title shot in 2020 says trainer 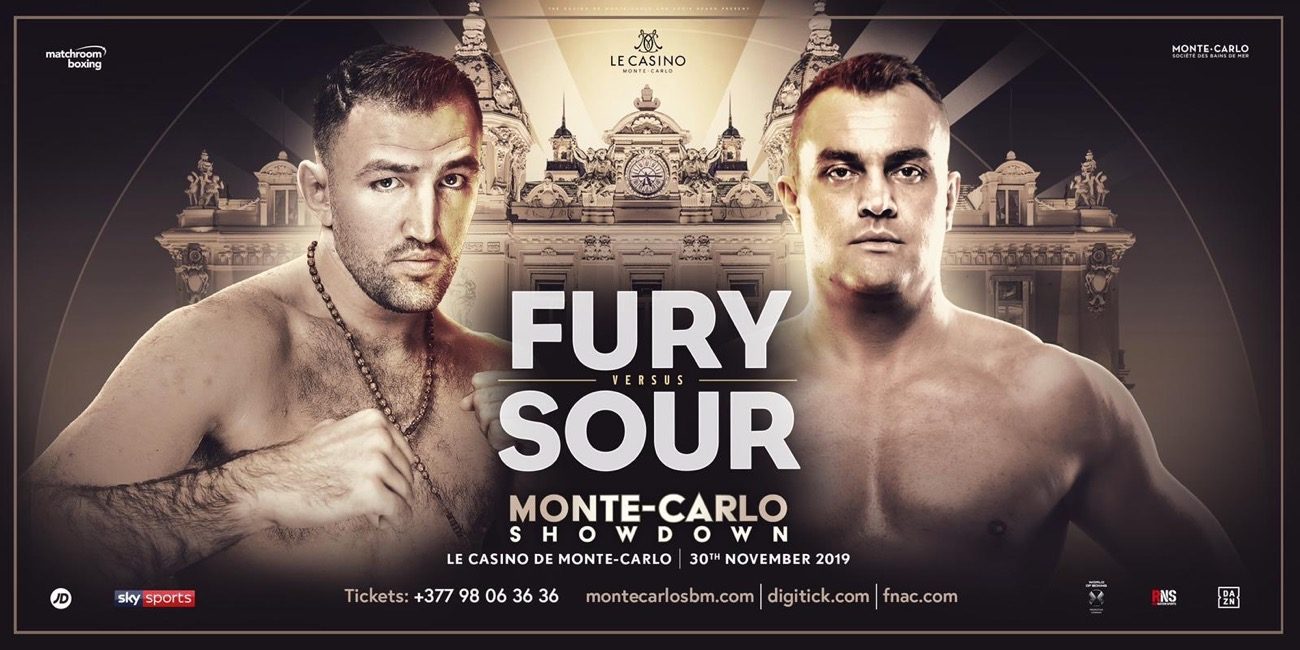 By Charles Brun: Hughie Fury will be getting a world title shot in 2020, according to his trainer/father Peter Fury. Fury (23-3, 13 KOs) will be fighting this Saturday, November 30 against Pavel Sour (11-2, 6 KOs) at the Casino de Monte Carlo Salle Medecin, in Monte Carlo.

If Hughie gets a title shot next year, it would be his second time fighting for a world belt. In 2017, Hughie challenged WBO heavyweight champion Joseph Parker and lost a 12 round majority decision.

Hughie didn’t take the loss too well, and neither did Peter. He thought he’d done enough to deserve the victory. However, Hughie spent most of the fight holding Parker, and moving around the ring to avoid getting hit. Boxing News 24 scored it for Parker 10 rounds to 2.

Hughie spent virtually the entire fight spoiling with his holding and running. It was interesting that he thought he’d won the fight afterwards, because it was a horribly bad effort on his part.

Hughie’s promoter Hearn could hook him up with title shot

Fury, 25, hasn’t done anything to deserve a world title shot, but Peter believes he’ll get the title shot with help from his promoter Eddie Hearn. If fellew Matchroom Boxing fighter Anthony Joshua beats IBF/WBA/WBO heavyweight champion Andy Ruiz Jr. on December, then Hearn can make an in house fight between AJ and Hughie.

In Hughie’s last 6 fights, he’s lost 3 of them in defeats to Kubrat Pulev, Alexander Povetkin and Joseph Parker.

“With the team around us now, I think we’ll get the world title fight,” said Hughie’s dad/trainer Peter to skysports.com. “I think Hughie will get his world title shot next year anyway. He’s right up there, he’s in the mix with the best of them. He’s fought the best and this is his time. We’ve fixed all of the problems hopefully and away we go on fight night,” said Peter.

Fury not ranked in top 15

Hughie isn’t ranked in the top 15 by any of the four sanctioning bodies at the present time, and that might make it difficult for him to get a world title shot. If Hughie is still not ranked in the top 15 by 2020, it’s going to put Hearn in a tough position to try justify him getting a crack at a world title. Hughie has 2 out of his last 4 fights, and things aren’t looking good for him. Despite Peter’s rosy outlook, Hughie’s career is imploding, and he’s going downhill fast.

The boxing public would dump all over Hearn if he were to get Hughie a world title shot.

Hughie is coming off of a 12 round unanimous decision to 40-year-old former WBA heavyweight champion Alexander Povetkin on August 31. Although Hughie had his moments in the fight, he was outworked, and outclassed by the older fighter. Povetkin was 15 years older than Hughie, but he was still fighting at a higher level.

“Let’s just look at the facts here – we’re not looking at somebody who has got wobbled or badly beaten, or anything,” said Peter about Hughie.

The good news is Hughie has a good chance of winning his fight next Saturday against the 37-year-old Sour. This is someone that Hughie can probably beat, because it’s a second tier fighter of marginal talent.

Sour recently lost to Jermaine Franklin by a one-sided 10 round unanimous decision last October. If Hughie can’t beat Sour, then it might be a good time to retire from boxing. Hughie can always follow in his father’s footsteps by becoming a trainer.