By Charles Brun: Eddie Hearn likes what he’s seeing of IBF light welterweight champion Josh Taylor this week ahead of his unification fight against WBA champion Regis Prograis this Saturday night at the O2 Arena in London, England. Taylor (15-0, 12 KOs) and Prograis (24-0, 20 KOs) are fighting for the Muhammad Ali Trophy in the final of the World Boxing Super Series.

Prograis’ punching power and accuracy is what could be the undoing for Taylor. He can’t let the New Orleans native land his shot, because it won’t take him look to wear him down. It almost looked unfair what Prograis did to his last opponent Kiryl Relikh in their semifinal fight in the WBSS tournament last April.

The 5’10” Taylor’s two inch height advantage over 5’8″ Prograis gives him an edge in this fight. It’s not just the height of Taylor. He has a bigger frame, and longer arms than Prograis. When the two fighters stand next to each other, they look like they belong in different divisions.

Taylor, 28, has the size to be competing at welterweight. You can’t fault him for choosing to fight at 140 while he still can, because the guys in the 147 lb division can really punch. Taylor needs as much experience as possible at 140 before he makes the step up to start mixing it with the welterweights.

“I really fancied Josh Taylor early on in this fight. But just seeing Regis the last couple of weeks, I thought, ‘You know what, he fancies this.’ But I just saw Josh Taylor in the ring, and he looks great. He looks strong, and he’s talking great. He’s talking about this moment. It’s the pinnacle of his career,” said Hearn.

Hearn should be making his predictions on how Taylor and Prograis looked in their recent fights rather forming his opinion by looking at them workout. Looking at a fighter bang away on the mitts can only tell you so much. Even Logan Paul has been looking good this week in his workouts with Shannon Briggs, but that doesn’t mean he can beat a real boxer. If Taylor wins this fight, it’s going to be because he was able to utilize his height and reach to control the distance against Prograis. But if Taylor allows

Taylor’s career could take off with win over Prograis

“This is a massive fight, and it breaks Taylor out to both sides of the Atlantic,” said Hearn. “It’s a major moment for both. Jose Ramirez has done it and he’s unified. These boys get a chance to do it on Saturday. I think the general feeling is that this is the fight for the #1 in the 140-lb division,” said Hearn.

A win for Taylor will definitely make a name for himself depending on how good he looks in winning. He needs to win without controversy with the judges scoring the fight in a sensible manner. If they turn in the type of scores that we saw in Taylor’s win over Viktor Postol last year in June, there will be a lot of angry boxing fans. Taylor fought well enough to just barely edge the 35-year-old, but the judges in turned these wide scores for Josh: 117-110, 118-110 and 119-108. The fight took place in Glasgow, Scotland.

While London isn’t Scotland, it’s still in the UK, and this is home territory for Taylor. Prograis is the American, who will be far away from home. So hopefully the scoring is accurate, and we don’t have a lot of angry fans if the fight goes the distance. A controversial decision going either way isn’t what Hearn needs for this card, given that this is the headliner. Boxing fans can put up with bad decisions when it’s a fight that is buried deep in the undercard.

“The Parker fight was a massive fight, but this fight has just gone crazy,” said Hearn about the Chisora vs. Price fight. “Everybody is talking about the fight, and everybody is debating the fight. What an opportunity for both guys. The winner is going to be in a massive fight in 2020. Two cracking guys, and both in the form physically and mentally of their life.

“Chisora is as fit as a fiddle and looking great. Price is coming off three domestic wins. All of a sudden he starts fancying it again. Their team really is so confident. Although Chisora is still the favorite in the fight, Price really believes he’s going to win this. I think it’s going to be such a thrilling fight where absolutely anything can happen.

There is some fan interest in the Dereck Chisora (31-9, 22 KOs) vs. David Price (25-6, 20 KOs), but it certainly can’t be described as HUGE like Hearn is saying. There’s some interest in the fight, but not a major amount. It’s a mismatch, and there’s some curious fans that are wondering if Price can turn back the clock to regain the form he had eight years ago. Neither of these guys are going anywhere. Hearn might be able to set the winner up for a title shot, but it’s still going to be disturbing when/if that happens.

Chisora vs. Price winner could face Usyk in February

“I said that if Usyk wants another fight before his world title fight, I’ll act on instructions, then the winner of this fight is a great fight for Usyk in February,” said Hearn. “It’s a massive fight. You’ve got Dillian Whyte, you’ve got Joseph Parker, you’ve got Alexander Povetkin vs. Michael Hunter winner.

“You’ve got all these big fights out there for the winner of this [Chisora vs. Price] fight, and they’re going to be a massive draw, whoever wins this fight. I’m getting stopped on the street by people, saying, ‘who’s going to win – Price are Chisora?’ People can’t stop talking about it. I think it’s going to build nicely for Saturday night, and it could go either way,” said Hearn.

It’s very likely Oleksandr Usyk (17-0, 13 KOs) and his advisers will veto the idea of fighting Chisora if he comes out victorious against Price on Saturday. Usyk, 32, looked terrible against Chazz Witherspoon in his heavyweight debut on October 12, and his management has obviously saw what everyone else witnessed.

Usyk’s lack of power is even more of a problem now that he’s at heavyweight than it was in the past when he fought at cruiserweight. Chisora would give Usyk a lot of problems, and put a lot of damage on his face. He seems to bruise easily, and Chisora might cut him and stop him. There’s too much of a size and power disadvantage for Usyk against a big puncher like Chisora. Hearn shouldn’t even be talking about the winner of the Chisora vs. Price fight facing Usyk, because it’s highly that it’ll happen. 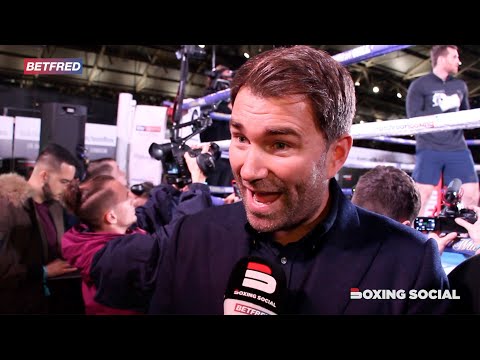