Chisora reportedly suffered a jaw injury in his loss to Fury, and it’s unknown when he’ll be back in action from that fight.

It wouldn’t be sporting for Chisora to be fed to the Olympians Hrgovic or Zhang because they’re bigger punchers than Fury and in better shape. They look younger than Fury as well and would be a feeding frenzy if Chisora were tossed into the ring against either of those two heavyweights.

Hearn would much rather see the 38-year-old Chisora (33-13, 23 KOs) retire after the beat down he took from Fury (33-0-1, 24 KOs), who he feels “held him up” rather than going all out last night at Tottenham Hotspurs Stadium in London.

Chisora made it clear in an interview after the fight that he’s NOT going to retire from boxing, and he’s going to continue on. The dilemma that Chisora has is he’s gotten used to making good money, spoiled from getting well-paying fights against Fury, Dillian Whyte, Vitali Klitschko, and Kubrat Pulev.

It’s unclear whether Chisora believes he will be handed another big payday by one of the British heavyweights. Fury would be viewed as being out of his gourd if he gave Chisora a chance for a fourth fight.

Anthony Joshua will never fight Chisora because he wouldn’t want to get laughed at the way Fury was.

The best chance Chisora has for one last payday is if Dillian Whyte chooses to face him in a trilogy match. Whyte is essentially a journeyman as well, but he’s popular in the UK.

It would be a gawdawful fight, but the British public would greedily watch it and likely pay to see it on pay-per-view. 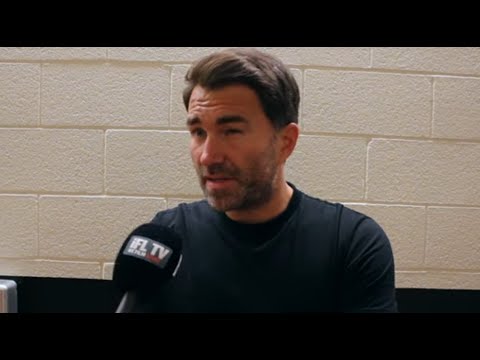 It’ll be difficult for Chisora, an aging journeyman at best, to mentally adjust from getting paid well to receiving smaller paychecks against regular contenders.

For starters, the odds of Chisora beating the 39-year-old Zhang Zhilei (24-1, 19 KOs) are slim & none. Although Zhang is technically older than Chisora, he has a better pedigree, having fought twice in the Olympics in China, and possesses more power.

It’s fair to say that if Chisora were to fight the big 6’6″ Zhang, he’d get taken apart at the seams within six brutally one-sided rounds. Zhang is a much better puncher than Fury, and he won’t spend 90% of the time leaning on Chisora rather than clobbering him with power shots to the head.

Chisora would be lucky to last six rounds against Zhang because he would be teeing off on him, and most just leaning the way the aging Fury was doing.

“He can come back and fight a Zhang, or he can fight a Hrgovic or Wardley, but he’s also made a huge amount of money the last couple of years,” said Eddie Hearn to iFL TV about the played-out-looking 38-year-old journeyman Derek Chisora after his one-sided defeat against Tyson Fury last Saturday night in London.

Domestic-level fighter Wardley (15-0, 14 KOs) would be a good option for Chisora, but the money probably wouldn’t be huge. Also, Chisora would be up against it facing him as well because the 27-year-old Wardley is a lot younger, and he can punch.

If you were to choose any semi-notable fighter for Chisora to fight next, Wardley would be the best option because at least there would be a chance for Derek to win. Wardley is easy to hit and vulnerable in the chin department. Moreover, Wardley doesn’t possess the pedigree of Zhang or Hrgovic, so Chisora wouldn’t be walking the plank against him as he would against those Olympians.

“We all love him, and I think now would be a great time to hang them up,” said Hearn. “Tyson Fury held him up a little bit, but Derek is brave as they come, and he’s just not going to stop,” said Hearn about Chisora.

Twelve Current and Past Heavyweight Champions! »