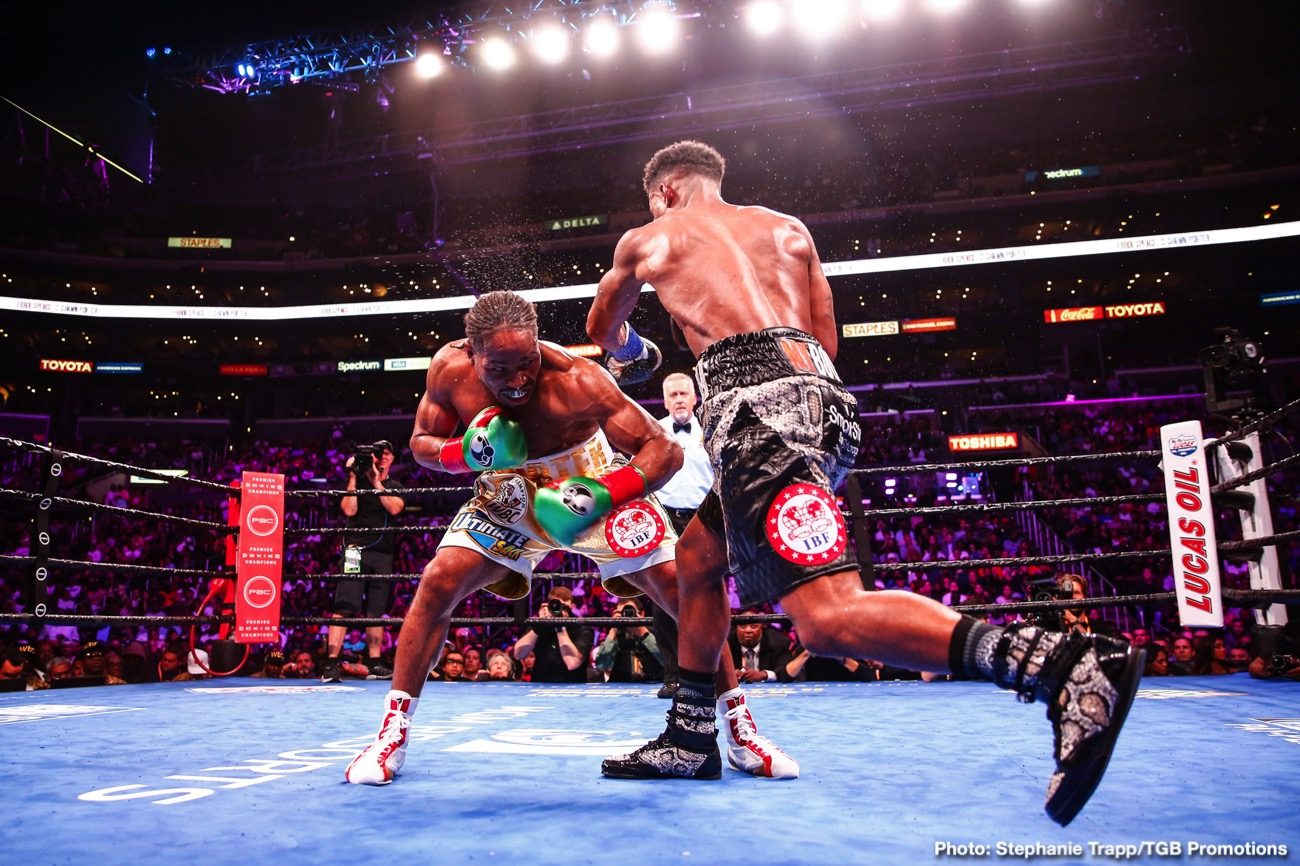 By Dean Berman: Errol Spence Jr. took to social media for the first time since his terrible car accident last week. The tough as nails IBF/WBC welterweight champion Spence Jr. (26-0, 21 KOs) wanted to let his many followers know that he’s doing OK, and he got out out of the accident without suffering any broken bones.

Spence tells his fans he suffered no broken bones

It’s a minor miracle that Spence didn’t lose his life or suffer major career-ending injuries from his car crash that occurred on October 10. Spence crashed his expensive Ferrari, and he was thrown from the automobile as it tumbled.

It’s believed that the 29-year-old Spence wasn’t wearing his seat-belt at the time of the crash. The weird thing is if Spence had been belted, he may have been killed due to the car tumbling and it being a convertible. That’s the wrong kind of vehicle you want to be in when a car is tumbling.

Spence is congratulating himself for surviving by saying he’s “savage,” but the truth of the matter is it was just luck on his part that he got out of the accident without being killed.

The Dallas police said that Spence’s Ferrari was “traveling at a high rate of speed” and then “veered left over the center median into the southbound lanes and flipped multiple times, ejecting the driver, who was not wearing a seat-belt,” according to ESPN.com.

Spence will need to change his driving habits if he doesn’t want up in another car accident. This should be a wake-up call for Spence that he needs to take it easy while he’s on the road. He has a bright future ahead of him in boxing if he can take it easy.

In his last fight, Spence defeated WBC welterweight champion Shawn Porter by a thrilling 12 round split decision on September 28 on Fox Sports Pay-per-View at the Staples Center in Los Angeles, California. A lot of boxing fans thought Porter deserved the decision, but the judges were swayed by Spence’s powerful body shots, and nonstop pressure. He dropped Porter with a left hook in the 11th round, and that sealed the deal.

The judges scored it 116-111, 116-111 for Spence, and 115-112. Porter had his trunks pulled up to around his navel in order to keep Spence from being able to throw body shots. It didn’t work, as the referee Jack Reiss understood that Porter had his trunks hiked high, and he let Spence hit him on the legal part of his midsection.

Spence could be back in action early 2020

Spence is expected to be back in the ring in early 2020 in defending his IBF/WBC welterweight titles against Danny Garcia. If Spence wins that fight he’ll likely face Porter in a rematch, and then take on WBO champion Terence Crawford. That’s the fight the boxing public wants to see.

Manny Pacquiao is also a possibility for Spence to fight in 2020, but that’ll be up to the Filipino star if he wants to take the match. It would be a big payday for Manny.

Just received this statement from Dallas Police: “Errol Spence Jr was charged with DWI, misdemeanor B. Mr. Spence has been released from the hospital and will need to address those charges. As for getting a speed of the vehicle, we will not be getting one.”