Kell Brook back with Dominic Ingle, not retiring 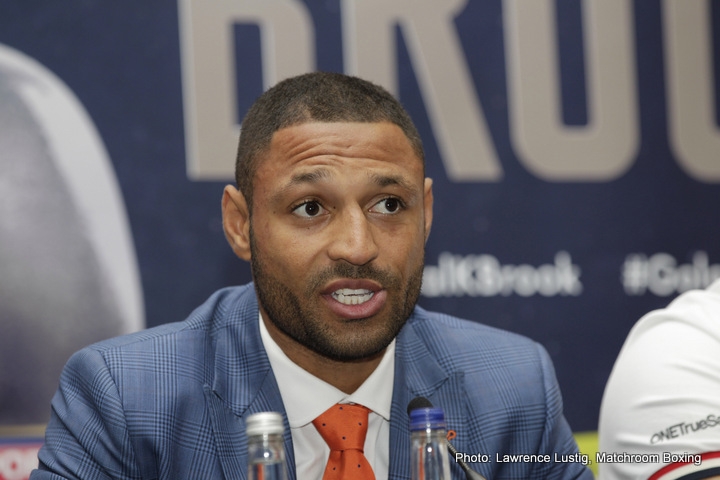 By Trevor McIntyre: Former IBF welterweight champion Kell Brook is back with his longtime trainer Dominic Ingle after reportedly having a disagreement with his trainer John Fewkes during his last bout against Michael Zerafa last December. Brook (38-2, 26 KOs) isn’t retiring despite rumors of that being the case.

Brook, 33, is training again. He’s not likely to face Amir Khan yet, as there’s no interest on his part in fighting him at this point. Matchroom promoter Eddie Hearn wants to put the fight together between the two, but there’s nothing he can do right now given the lack of desire on Amir’s part in facing Kell. With the eye socket injuries Brook suffered in his stoppage losses to Gennady Golovkin and Errol Spence Jr., Khan wants him to retire.

Former IBF/WBA light welterweight champion Khan (34-5, 21 KOs) wants Brook to hang up his gloves, and walk away from boxing. He states that Brook is starting to slur when he speaks. Brook obviously doesn’t agree, because he posted a short video clip of Khan stuttering badly on his Twitter site. What’s obvious though is the fact that Khan has no interest in fighting Brook at this point in his career.

Whether Khan will change his mind or not could come down to the fights available to him. He’s had two back to back nice paydays against Billy Dib in Saudi Arabia and WBO welterweight champion Terence Crawford on ESPN pay-per-view. Khan is now trying to get a fight against Manny Pacquia. If he can get that match, then it makes sense that he wouldn’t want to fight Brook.

“He should get in line. Kell Brook, I really feel he should retire,” said Khan to the Dailymail.co.uk on the ‘Ask the Experts’ postcast. “I don’t want to fight him, give him a beating and hurt him. He should retire because he’s had two eye sockets broken, he’s already slurring. He’s been beaten up basically,” said Khan.

Brook needs to resume his career, because he’s wasting time sitting on the sidelines. He’s been out of action for eight months, and he still doesn’t have an opponent selected for his next fight.

🔶 Kell Brook says he is now back with his old trainer Dominic Ingle after fighting with John Fewkes in his corner last time out. The former IBF welterweight champion is training again and insists he is not retired.

Khan had planned on fighting Brook

Earlier this year, Khan was in negotiations for a fight against Brook, but he changed his mind. Khan was a title shot against WBO welterweight champion Terence Crawford on April 20 on ESPN PPV at Madison Square Garden in New York. The fight was stopped in the sixth round after Khan was hit low by Crawford. Khan’s trainer Virgil Hunter pulled him out of the fight after he was injured from a low blow. Some boxing fans believe that Khan quit, but technically it was his trainer Hunter who pulled him out of the fight. Khan looked good at times in that fight, but it seemed clear at the time of the stoppage that he wasn’t going to be able to last too much longer against the hard hitting Crawford.

“Kell has nothing exciting going for him, that’s why he keeps calling my name out and living off the back of that,” said Khan. “It happens in boxing that boxers use other big names to give themselves a big name or keep them relevant. So I just feel that if the fight happens, it happens and he would get hurt. Boxing is a tough sport, especially when someone is already broken. I don’t want to be giving any more punishment to him,” said Khan.

It’s quite possible that Khan will change his mind about not wanting to fight Brook if he fails to get a big fight. He wants to face WBA Super World welterweight champion Manny Pacquiao, but it’s not likely that he’ll be able to get that fight. It’s believed that Pacquiao will fight the winner of the September 28th fight between Errol Spence Jr. and Shawn Porter. Those two are fighting each other on Fox Sports pay-per-view. Pacquiao is in a situation where he needs to be fighting a top name for him to get a big payday. He’s not going to get huge money fighting a non-relevant fighter like Khan or Danny Garcia.

Brook crippling his career with inactivity

Khan doesn’t need to give excuses for why a fight against Brook doesn’t interest him. The match is no longer big enough to be worth it anymore. The British boxing public wouldn’t go for a fight between those two past their prime fighters right now. Brook hurt his own career by not being active enough to stay relevant. When Brook came back from an eye socket injury in his 11th round stoppage loss to Spence in May 2017, he defeated Sergey Rabchenko in March 2018 . That was 10 months out of the ring for Brook, which is understandable given that he had suffered a fractured left eye socket in his loss to Spence.

What didn’t make sense is for Brook to stay out of the ring for nine months before coming back to face fringe junior middleweight contender Zerafa last December. Boxing fans didn’t understand why Brook stays out of the ring for so long, and why he chose to fight a weak opponent in Zerafa. Brook has now been out of the ring for eight months, and he still hasn’t an opponent picked out. Even when he does find an opponent, he might not fight until November or December. So we’re basically talking a year of inactivity.

“If he does fight me, there’s only one winner. I know myself, we are different levels apart and I can’t see it happening. The only advice I can give him is to retire,” said Khan about Brook.