Kell Brook doesn’t have a lot of options, should have fought Conor Benn says Frank Smith

By Barry Holbrook: Frank Smith of Matchroom Boxing believes Kell Brook should have taken the fight with Conor Benn because he feels he doesn’t have a lot of options right now.

Brook is rumored to have been asking for $10 million, which was out of the price range for a fight with Benn.

Benn (21-0, 13 KOs) is instead facing 34-year-old veteran Chris Van Heerden this month on April 16th on DAZN at the Manchester, England.

There’s been a bit of a backlash against the 25-year-old Benn from boxing fans over the choice of Van Heerden as his next opponent because he’s not viewed as a step up from Conor’s last fight against 37-year-old Chris Algieri.

Van Heerden hasn’t fought since his first-round no-decision against Jaron ‘Boots’ Ennis on December 19th, 2020, and he didn’t look too good in that fight before it was halted after the first round due to a cut the South African had suffered.

With Benn saying this week that he believes he’ll be a world champion within twelve months, it’s important that he step up at some point to fight guys like Avanesyan to help him prepare for a world title shot.

Benn perhaps believes IBF/WBC welterweight champion Errol Spence Jr. will move up to 154 after 2022 when the smoke clears from his fights with Yordenis Ugas on April 16th, and then the winner takes on WBO champion Terence Crawford after that.

Once some or perhaps all of the four 147-lb belts are freed up, Benn will be in a position to fight for one of the vacated straps in 2023.

Van Heerden is a learning fight for Benn

“I think it’s a good fight for him. Van Heerden is a really experienced fighter. Conor is still learning, still developing, and still young and 25-years-old,” said Frank Smith of Matchroom Boxing to Secondsout about Conor Benn.

“I think he’s going to learn a lot, a southpaw, good test for him, and I’m looking forward to it,” Frank continued about him being pleased with Van Heerden being selected for Benn to fight on April 16th.

“I think Chris Algieri is the same, another experienced fighter, and he [Benn] is going to learn more and more from all these fights.

“They all bring something different to the table,” said Smith when asked how much of a step-up 34-year-old Van Heerden is from Benn’s last opponent 37-year-old Chris Algieri.

“Chris Algieri has been in there with the best and Van Heerden has as well. It’s about growing in experience and it’s all going to help him.

“He wants to move quickly, he’ll fight anyone, but it’s about doing it at the right time and getting the right experience. That’s why he has the team around him to help him with that side.

“And big names as well,” said Smith when asked if Van Heerden is the last step in the ladder for Conor Benn before fighting world-level fighters.

Smith: Brook should have fought Benn

“Like I said, he [Benn] would have fought Kell Brook straightaway after Kell Brook’s win over Amir Khan. So we’ll get this [Van Heerden] out of the way, and in the summertime, we’ll look for a big fight for him 100%.

“I don’t know, to be honest,” said Frank when asked why Brook didn’t accept a fight with Benn.

“That’s one to look at in the future. I also like the Amir Khan fight,” said Smith.

In hindsight, it might have worked out in Benn’s favor that the Brook fight didn’t happen next because Kell is still fighting at a high level, and looks very dangerous still. It might have been too much of a leap up in competition for Benn. 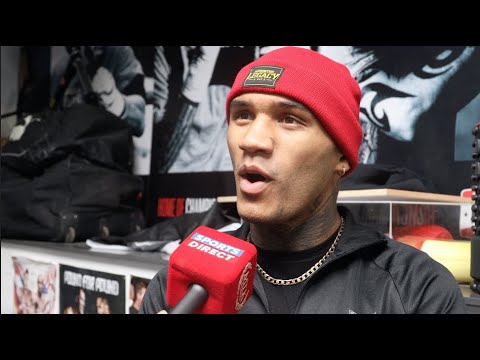