By Charles Brun: A wild-eyed-looking Eddie Hearn revealed last Saturday that the next opponent he wants Conor Benn to fight is Kell Brook at a catchweight of 150 lbs.

The only problem is the former IBF welterweight champion Brook (40-3, 28 KOs) will need to lower his asking price of ten million quid to a more realistic number.

Hearn says he’s willing to give the 18-year professional Brook the same amount of money he made for his recent fight against Amir Khan last February.

For Brook’s part, it’s understandable why he’s asking for $13 million for a fight against the unbeaten highly popular Benn (21-0, 14 KOs).

With the popularity that Benn has now in the UK, it’s clearly a much bigger fight than his contest last February against the past 35-year-old Amir Khan.

Brook vs. Benn would likely bring in double the amount of PPV buys as Kell’s fight against the faded shopworn Khan did. Also, Brook-Benn is a stadium-level contest that would be potentially big enough to stage at Wembley.

“We’ve offered Kell Brook the same money he got to fight Amir Khan and he asked for ten million pounds,” said Eddie Hearn last Saturday at the post-fight news conference.

It’s easy to understand why Brook is looking at a fight against former IBO super-middleweight champion Chris Eubank Jr. now. For one, it’s an easy fight for him because Eubank Jr. (32-2, 23 KOs) doesn’t possess the boxing skills to compete with Brook, so he sees that fight as money in the bank.

Secondly, Eubank Jr. is on the downside of his career and has clearly faded to the point where he’s now struggling against domestic-level opposition, as we witnessed in his fight against Marcus Morrison.

Unless Hearn can come up with the figure near the ten million pounds that Brook is asking for, he’s going to go ahead with the easy-money fight against Eubank Jr.

If Hearn is smart, he’ll meet Brook’s asking price because if he waits much longer, Conor Benn is going to get exposed by one of the old veterans that he’s been routinely digging up for him to look good against.

“They’re [Team Brook] looking at him [Benn] and going, ‘He’s a horrible, spiteful mother f***. So you got to give me 10 million quid to get in with that horrible spiteful mother f****. I’ll fight Chris Eubank Jr instead at 158 pounds instead of him.’ What a compliment” said Hearn last Saturday.

“We’d like Kell Brook, to establish the best welterweight in Britain,” said Hearn to the BBC.

The other names that Hearn mentioned as possibilities for Benn’s next fight are from this list of suspects:

The fact that Hearn keeps mentioning the 34-year-old Mikey Garcia first suggests he’s the guy he wants for Benn if not Brook. 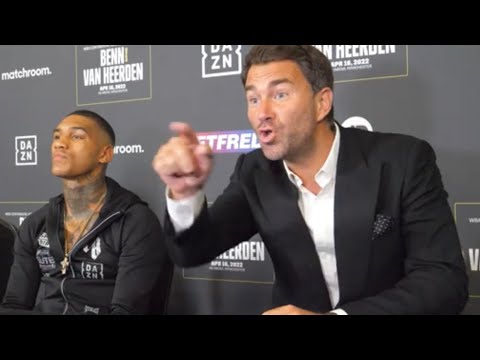 
« What if Tyson Fury LOSES to Dillian Whyte?

Benavidez wants Andrade next or he’ll go to 175 »