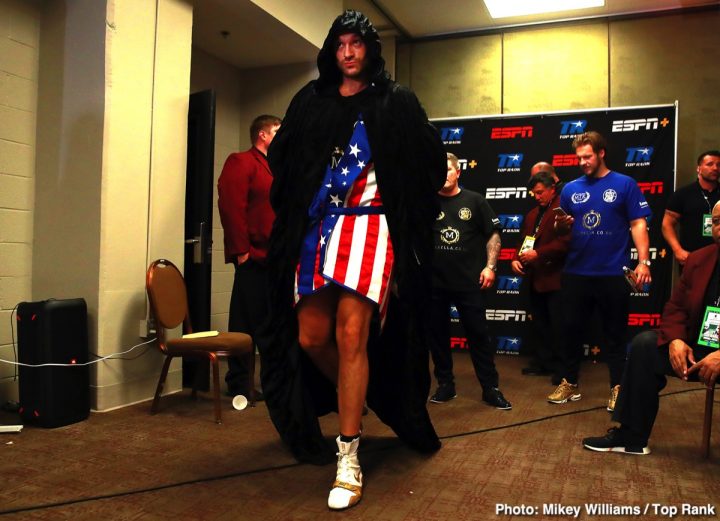 By Charles Brun: With Tyson Fury’s poor attendance numbers for his fight last Saturday night against Tom Schwarz at the MGM Grand Garden in Las Vegas, it’s important that he face a popular fighter next.

Fury’s bout with Schwarz had a paid attendance of 5,489 with 1,187 comps. The fight was supposed to have had an attendance of 9,012. But, even if that were true, those are not great numbers, and not close to the 21,000 tickets sold for Anthony Joshua.

Top Rank, the co-promoters for Fury, likely are having second thoughts about the wisdom of having signing him to an expensive contract. Unless Top Rank is willing to invest in Fury’s career for the long haul, they’re going to need to put him in with WBC heavyweight champion Deontay Wilder, Tyson Fury or Andy Ruiz Jr. to make money. In other words, Top Rank is going to need to cash out soon to make money off having signed Fury.

It’s painfully obvious now that Fury isn’t going to become a pay-per-view fighter or sell huge amounts of tickets fighting weak opposition from his woefully bad record padding fights. As such, Top Rank must match Fury against better opposition for them to turn him into a box office and pay-per-view draw.

Here are some of the options for Fury to fight in November:

News:
Deontay Wilder doesn't regret saying he wants a body on his record

There’s not a lot of good choices for Fury to fight in another tune-up match. Unfortunately, that’s a problem that Top Rank is faced with, and they’re going to need to take a take a risk with the light hitting Fury by putting him in with a live body.

Whyte (25-1, 18 KOs) is fighting next month against Oscar Rivas in a WBC title eliminator. Dillian wants a title shot against Wilder, so might not be agreeable to facing Fury. Fury vs. Whyte would be a good fight, but it wouldn’t attract the U.S casual boxing fans to want to subscribe to ESPN+ or purchase tickets to watch it live. These two British heavyweights have been invisible to U.S fans, and for that reason it’s not going to interest the casual fans in the States.

News:
Thurman and Pacquiao pick Wilder by KO over Fury

This is one of Top Rank’s heavyweights that has been around for a while, but has done nothing with his career. Fury vs. Jennings is a waste of time. Jennings (24-3, 14 KOs) is fighting next month against unbeaten 2016 Olympic silver medalist Joe Joyce (9-0, 9 KOs), and he’s probably going to lose that fight. Once that happens, there’s no point in Fury fighting Jennings.

Rivas (26-0, 18 KOs) would make sense as an opponent for Fury if he beats the 31-year-old Whyte next month in their fight on July 20 on Sky Box Office at the O2 Arena in London, England. Rivas, 6’0 1/2″ is short, and he would have to focus on throwing to the body of the 6’9″ Fury, which isn’t a bad idea. Top Rank likely won’t be interested in matching Fury against Rivas though, because he’s a risky fight for him.

This would be a good opponent for Fury to fight in November. Joyce, 6’6″, is tall, heavy and powerful. Fury would need to show a lot more against Joyce than he did in his fight with Schwarz for him to win. It would be a risky fight for Fury. Therefore, Top Rank won’t make the match-up.

Pulev is ranked #1 with the IBF, and he’s not going to agree to fighting Fury for the chicken feed that Top Rank will likely be offering him. It would be a good match-up, but it’s not going to happen.