Daniel Jacobs to return in October or November on DAZN 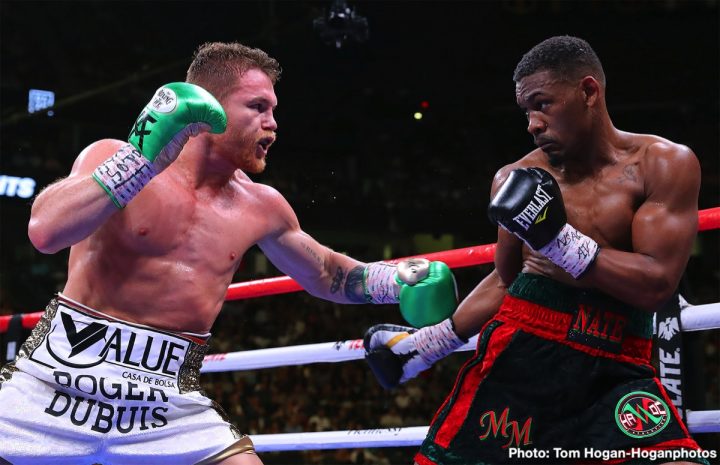 By Kenneth Friedman: Daniel Jacobs will be returning to the ring in October or November on DAZN, possibly at super middleweight, according to Mike Coppinger. Jacobs (35-3, 29 KOs) lost his IBF 160-pound title in a unification fight against WBA/WBC middleweight champion Saul Canelo Alvarez in a close 12 round unanimous decision last month on May 4.

Jacobs missed his chance of beating Canelo by starting too slowly in the first six rounds. It was the same critical mistake Jacobs made in his loss to former IBF/WBA/WBC champion Gennady ‘GGG’ Golovkin in 2017. In both fights, Jacobs came on strong in the second half of the contests, but he gave away too many early rounds to get the wins.

This could be Jacobs’ first fight at super middleweight. He revealed after his loss to Canelo that he plans on moving up in weight to the 168 due to his struggles in weighing in for the middleweight division. There was a rehydration clause in Jacobs’ contract with Canelo, and he ended up giving up on that. This is going to be interesting to see whether Jacobs is stronger in the 168 pound division than he’s shown at 160.

Daniel has said repeatedly that he would be a stronger fighter at super middleweight. His trainer Eddie Hearn of Matchroom Boxing also believes this. If it turns out they’re right, Jacobs could dominate at 168. He’s a special talent. The 168 pound division doesn’t have anyone with Jacobs’ overall ability, and he could immediately become the #1 guy unless Canelo follows him up.

Jacobs should have arguably moved up in weight back in 2017, because he was already having problems when he fought GGG. Jacobs is said to have rehydrated to 190 pounds for the Golovkin fight, which is an incredible amount for a middleweight to be weighing for a fight. Golovkin fought well despite being dramatically out-sized by Jacobs.

Jacobs will need to show the ability to handle the big punchers at 168 for him to excel in that weight class. It’s going to be a different story for Jacobs at super middleweight compared to when he was fighting at 160. He’ll need to be able to take the hard shots from the bigger punchers like Callum Smith, David Benavidez, Anthony Dirrell, and David Lemieux for him to find a level of success at 168.

There are some finesse fighters that Jacobs could do well against like Caleb Plant and Billy Joe Saunders. Those are guys that Jacobs will need to box for him to beat them. He won’t have to worry about their punching power, but he will need to be able to outbox them to take their titles.

Here’s what Mike Coppinger said on his Twitter about Jacobs’ return in October or November:

“Daniel Jacobs is preparing for a return in October/November on DAZN, likely at 168 pounds, his manager, Keith Connolly, tells @TheAthleticBOX. Jacobs had a lot of difficulty making 160 for Canelo Alvarez bout and makes sense for him to campaign at super middleweight going forward”

Jacobs could have a short stay at 168

It would be a good idea for Jacobs to have a plan-B option if he fails to thrive at super middleweight. This is a weight class in which Jacobs will need to have a good chin for him to do well. He’s been vulnerable in the past when getting hit hard by fighters at 160. Dmitry Pirog knocked Jacobs out in the fifth round in 2010. Pirog was a good puncher, but he was nowhere near the guys like David Benavidez, Callum Smith and David Lemieux in the power department. Jacobs lacks the size to move up to 175. So if things don’t workout well for him at 168, he’ll have no other choice but to move back down to 160 if he can.

Jacobs, 32, has past wins over Maciej Sulecki, Sergiy Derevyanchenko, Luis Arias, Sergio Mora, Peter Quillin and Caleb Truax. Daniel ‘Miracle Man’ Jacobs has proven that he can beat some of the best fighters in boxing. Jacobs has only had problems against GGG, Canelo and Pirog.