Who’s next for Deontay Wilder? 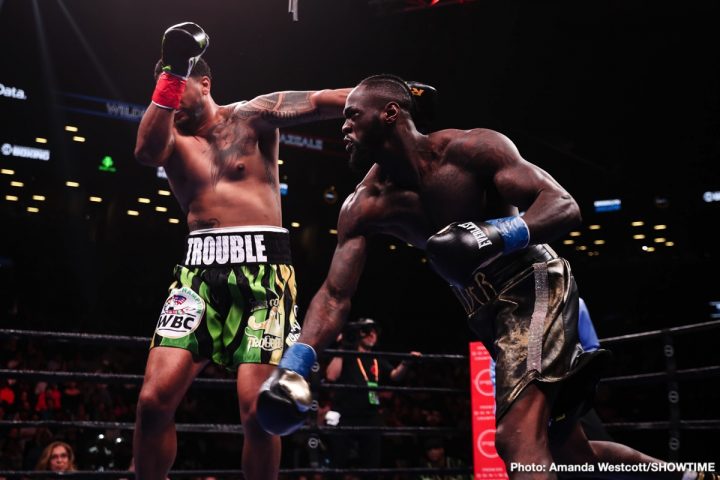 By Tim Royner: Deontay Wilder obliterated Dominic Breazeale on Saturday night to hold onto his WBC heavyweight belt with an explosive first round knockout victory, and now the charismatic champion moves on to bigger and hopefully better things.

The boxing public wants to see an upgrade for Wilder from what they’ve seen from him in his last two fights. That’s no office to Breazeale and Tyson Fury, but neither of them made it interesting to watch.

The options for Wilder’s fight are as follows:

Ortiz, 40, came close to knocking Wilder out in the seventh round last year in March at the Barclays Center in Brooklyn. Ortiz had Wilder hurt after hitting him with a powerful left hand counter that he never saw coming. However, Ortiz gassed out after the seventh, and was unable to capitalize on Wilder being hurt. Some believe that the delay of the start of the eighth round played a factor in Wilder being able to fully recover from being hurt in the seventh. This writer doesn’t think it mattered. Wilder looked like he was fine when the New York State Athletic Commission checked him out before letting the fight continue before the start of round eight. Ortiz was too tired to do anything in the eighth, ninth and tenth to win the fight.

As much as the fans would like to see a rematch between Wilder and Ortiz, it would be better for a new fighter to be brought in to face Deontay. Ortiz didn’t look good in his recent wins over Travis Kauffman and Christian Hammer. Whether that’s age, poor training or just bad match-ups is unknown. The only thing you can say is Ortiz looked old against Kauffman and Hammer, and not the fighter he was last year when he fought Wilder.

Wilder and Tyson Fury (27-0-1, 19 KOs) battled it out to a 12 round draw on December 1 in Los Angeles, California. The fight was boring for a lot of American boxing fans to watch due to evasive style that Fury used in the fight. He didn’t look like he wanted to fight, and he was knocked down hard in the 12th and was down for a long time before the referee started giving him a count. The fight looked like he should have been stopped. Fury got up and made it out of the 12th. He’d been knocked down twice in the fight. The judges scored it a draw, but it easily could have gone to Wilder. He had been the aggressor the entire fight, landed the harder shots in every round, and knocked Fury down twice. The judges and the referee arguably bent over backwards to accommodate Fury. A second Wilder vs. Fury fight might be as dull as the first one. For that reason, it would be better to see someone else brought in to face Wilder.

Fury isn’t expected to fight Wilder in 2019. Fury wants to fight in September. His promoter Bob Arum of Top Rank Boxing say he’s thinking of doing the rematch between Fury and Wilder in the first quarter of next year. Arum hasn’t given any hints about who he plans on matching Fury against after is June 15th fight against Tom Schwarz. It could be someone like Agit Kabayel, Bryant Jennings or Robert Helenius. In other words, someone mediocre without much talent. Fury had a chance to fight Wilder in a rematch on May 18, but he and his new promoters at Top Rank passed up on the fight, and went with #2 WBO Schwarz (24-0, 16 KOs). Fury has been hard at work trying to convince the boxing public that Schwarz is a credible opponent with loads of talent, but they’re not listening. They see the fight as a mismatch. It’s interesting that Fury chose to walk away from the big money rematch with Wilder in order to take a lesser fight against the light punching German fighter Schwarz on June 15 in Las Vegas, Nevada.

When the time comes for a rematch between Wilder and Fury to get negotiated, it’s going to be very difficult, if not impossible, for that fight to get hammered out, now that Fury is with Top Rank. Fury is going to want to get parity in terms of the purse for the fight with Wilder, and who knows what else he’ll want as well.

It’s unlikely that Wilder and Joshua will be fighting next. The negotiations, if there’s serious ones, probably won’t be to the liking of Wilder and his manager Shelly Finkel. They want a 50-50 deal, and they’re not going to agree to a 70-30 or 60-40 split to fight Joshua like Hearn has offered in the past. Likewise, Wilder is probably not going to want to come over to the UK, and give Joshua home country advantage like Wladimir Klitschko mistakenly did in 2017. When you know a fighter needs the crowd on his side to do well, you’re not going to give them the advantage of fighting them in their own country. Joshua’s fight against Joseph Parker in the UK, in which the referee prevented inside fighting, it another reason why Wilder might not want to fight AJ in the UK.

Joshua (22-0, 21 KOs) will be defending his three heavyweight world titles next month on June 1 against Andy Ruiz Jr. on June 1. It was Joshua’s promoter Eddie Hearn’s idea to fight the pudgy Ruiz Jr. Joshua wanted to fight Luis Ortiz, but Hearn wasn’t interested in paying the Cuban fighter his asking price. So instead of getting him, they’re going to have Ruiz as the guy he faces. Joshua is already being ridiculed like made by boxing fans for his choice of opponent for his heavyweight debut in the U.S. Hearn failed to realize that the American fan are picky in the type of fights they want to watch. While this might go over well elsewhere, it’s not a popular one in the U.S. 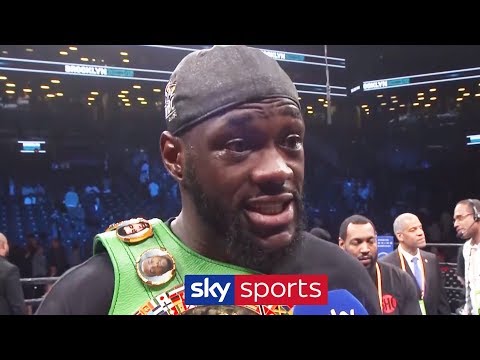 
« Breazeale: “The referee stopped it a little early”

Errol Spence says to Canelo: “Bring it to Al [Haymon] and let’s do something” »