Errol Spence says to Canelo: “Bring it to Al [Haymon] and let’s do something”

By Chris Williams: Superstar Errol Spence Jr. says Golden Boy Promotions needs to contact his adviser Al Haymon to start putting together a fight between him and Saul Canelo Alvarez if they’re interested in making that mega-fight happen.

The money split needs to be negotiated. Spence has already said that he’s not going to agree to a first offer. There’s a rumored $20 million offer that has been floated for Spence. If that’s not to his liking, then Golden Boy will need to bump that up to get Spence to say yes to the fight. There’s also things like the weight, date of the fight, and venue that need to be negotiated. Canelo likes to fight at the T-Mobile Arena in Las Vegas, Nevada each time he competes for some reason, and there’s been some controversial decisions in that venue that has favored him. Whether Spence would want to put himself in position to lose a fight to Canelo in that same venue is unclear.

Spence (25-0, 21 KOs) was on hand last Saturday night for the Deontay Wilder vs. Dominic Breazeale fight at the Barclays Center in Brooklyn, New York. Spence was disappointed that he had to go home early after Wilder knocked Breazeale out in the first round.

“He put him to sleep early. Now I know how it feels. I got to home early,” Spence said to Fighthype about the WBC heavyweight champion Deontay Wilder’s first round knockout win over Dominic Breazeale last Saturday night.

Wilder made easy work of Breazeale. That was a surprise to some boxing fans, because they felt that Breazeale was a seasoned enough veteran to make it to at least seventh round or later before he was dispatched by Wilder. Breazeale left himself open for the right hand by Wilder, and that’s all it took.

“To fight Canelo, negotiations can be made. I’m not going to take no first offers,” Spence said. “Bring it to Al [Haymon] and let’s do something.”

For all the fans that say that Spence would be out-sized by Canelo, the truth is the two are about the same size. Canelo is 5’8″, whereas Spence is 5’9 1/2″. Both guys weigh in the 170s after they rehydrate for their fights. Canelo looks thicker because he’s got thin Babe Ruth pipe-stem legs. Most of Canelo’s weight is in his upper body. He’s got short, thin legs of a Ruth type. Spence is the taller, more proportional fighter of the two.

Spence is coming off of a 12 round unanimous decision win over Mikey Garcia on March 16 in Arlington, Texas. Spence totally schooled the smaller, weaker Mikey. When told that Spence is thinking about fighting Canelo next, Mikey said he thinks it’s too big of a jump up in weight for to handle in going up two weight classes to fight Canelo at 160.

“It’s a big weight to jump up in to fight like that,” Mikey Garcia said to esnewsreporting about Spence potentially going up to middleweight to challenge IBF/WBA/WBC champion Canelo. “It’s a big jump from 147 to 160. Maybe they’ll figure out a way to do a catch-weight or something. Maybe, but I don’t know. I think that’s way too much weight.” 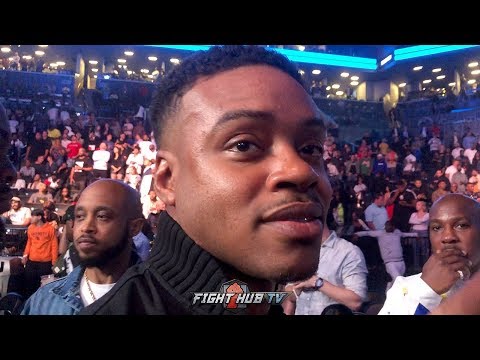 Mikey sounds a little bitter still about having lost so badly to Spence. It would be interesting to know how Mikey really feels about Spence’s chances against Canelo. Mikey isn’t exactly the right guy to be asked about a potential fight between Spence and Canelo right now. The timing is bad. Mikey might be still hurting because of how easily Spence beat him. A lot of boxing fans think Mikey didn’t even try to win.

Given that Floyd Mayweather Jr. easily beat Canelo in 2013 in a catch-weight at 152 pounds, Spence would have an excellent chance of defeating the Mexican star at 160. What Canelo’s recent fights have shown is little more than a six to seven round fighter at this point in his career. He runs out of gas after six rounds, and gives away five of the last six rounds of his fights. He comes on the 12th to barely win that round, but he’s unable to do anything from the sixth to the 11th. Canelo would have lost both fights to Gennady Golovkin, and his recent fight with Daniel Jacobs if those fighters had fought harder in the first six rounds. They gave Canelo too much respect early, and let him fight at the slow pace that he needs to win rounds.


« Who’s next for Deontay Wilder?