Breazeale: “The referee stopped it a little early” 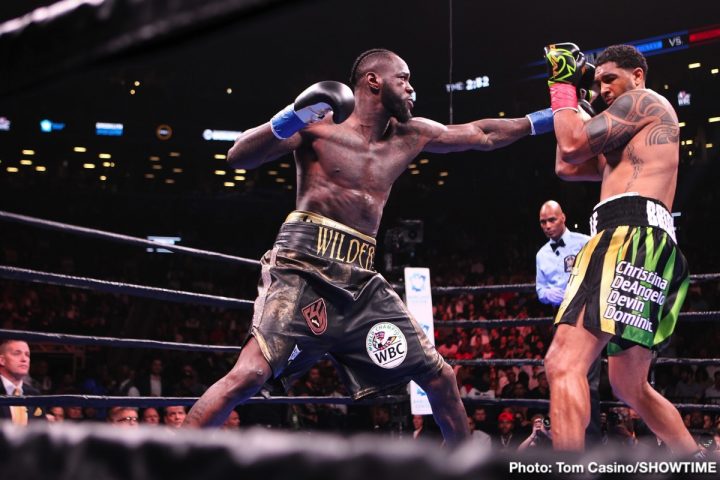 Breazeale, 33, was laid out pretty by Wilder with a right hand to the head in round one. Although Breazeale did make it to his feet after the knockdown, it appeared that the referee Harvey Dock counted to 10 just at the moment that he made it up. Some referees might have let the fight continue if Breazeale was the A-side money fighter, but he wasn’t in that position last night unfortunately for him.

“I think the ref stopped it a little early because I could hear him saying seven and eight, but that’s boxing,” Breazeale complained afterwards. “He did his job and kept us safe for our next fight.”

Breazeale sounds like he’s in serious denial about how badly hurt he was by Wilder. What a shame. By now, Breazeale has likely gotten a chance to watch his fight with Wilder on replay a dozen times, and knows that the referee did the right thing in stopping it when he did.

For the sake of argument, let’s pretend that the referee had allowed Breazeale to keep fighting after he got back up. Breazeale looked so out of it, he would have been at the mercy of Wilder. Even if Wilder showed no form at all in just throwing windmill shots at Breazeale, he would have knocked him out right away with the first one or two looping shots he threw. It’s a good thing the fight was stopped before that happen. Breazeale might have been knocked unconscious by Wilder. In another scenario, if Wilder had taken his time and measured the badly hurt Breazeale to hit him with a similar right hand that he dropped him with, it would have been game over. Breazeale wouldn’t have been able to take another one of those shots without dropping for the 10 count.

It’s interesting that Breazeale is talking about there being a next fight for him. He might have been better off saying that he’s going to think about whether he should continue fighting at this point in his career, because he arguably could have a lot more losses on his record than the two that he has. Journeyman Fred Kassi deserved a win over Breazeale in their fight in 2015 in the minds of a lot of boxing fans. This writer had Kassi beating Breazeale. Amir Mansour had Breazeale on the deck was beating him through five rounds until suffering a mouth injury in their fight in 2016. Mansour would have likely beaten Breazeale had the injury not occurred. Little known Izuagbe Ugonoh almost knocked Breazeale out in the fourth round in their fight in February 2017. That was a real surprise, because Ugonoh shouldn’t have been able to do that if Breazeale was the real genuine article.

“I got on my feet and had my legs under me. It’s the heavyweight division so there’s going to big shots from guys with power,” Breazeale said. “This was a situation where he landed the big right hand before I did. I thought I was going to come on in the later rounds. I’ll be back and go for the heavyweight title again.”

Breazeale must be talking about in general when saying that Wilder landed his right hand before he did. Breazeale wasn’t in the process of throwing a right hand when Wilder nailed him with a long right hand from the outside. Breazeale was starting to move forward to get in position to throw a punch when Wilder hit him with the right hand that knocked him out.

You never know. Breazeale might be able to work his way back to a title shot against IBF/WBA/WBO heavyweight champion Anthony Joshua (22-0, 21 KOs) or Wilder without fighting a talented contender. Goodness knows, Breazeale only had to beat an over-the-hill Eric Molina to earn the mandatory position with the World Boxing Council to challenge Wilder last night. If the sanctioning bodies lets Breazeale fight a lesser heavyweight like that, he can earn another mandatory position. It’s pretty obvious at this point that Breazeale likely will never get a world title shot without him becoming becoming a mandatory. If Breazeale has to beat a decent heavyweight like Dillian Whyte, Kubrat Pulev, Adam Kownacki, Tyson Fury or Joe Joyce to earn a title shot, he’ll likely fail miserably. This writer doesn’t think Breazeale can beat those type of fighters.

Can Breazeale come back from this loss?

The way that Wilder clobbered Breazeale, it’s going to be hard for the big 6’7″ Dominic to come back from this to be a major player in heavyweight division. This was Breazeale’s second knockout loss against an elite heavyweight during his career, and it looks like he doesn’t possess the talent to compete with the best. Breazeale has made good money in his his fights against Joshua and Wilder. A lot of fighters never get a world title shot against a big name. Breazeale has gotten two title shots without beating anyone of note to get those shots. Joshua gave Breazeale a crack at his IBF belt with his best wins at the time being against Mansour and journeyman Kassi. Breazeale got that fight with Joshua more on the fact that he was a 2012 U.S Olympian than what he’d accomplished as a pro, which was basically nothing.

Who’s next for Deontay Wilder? »