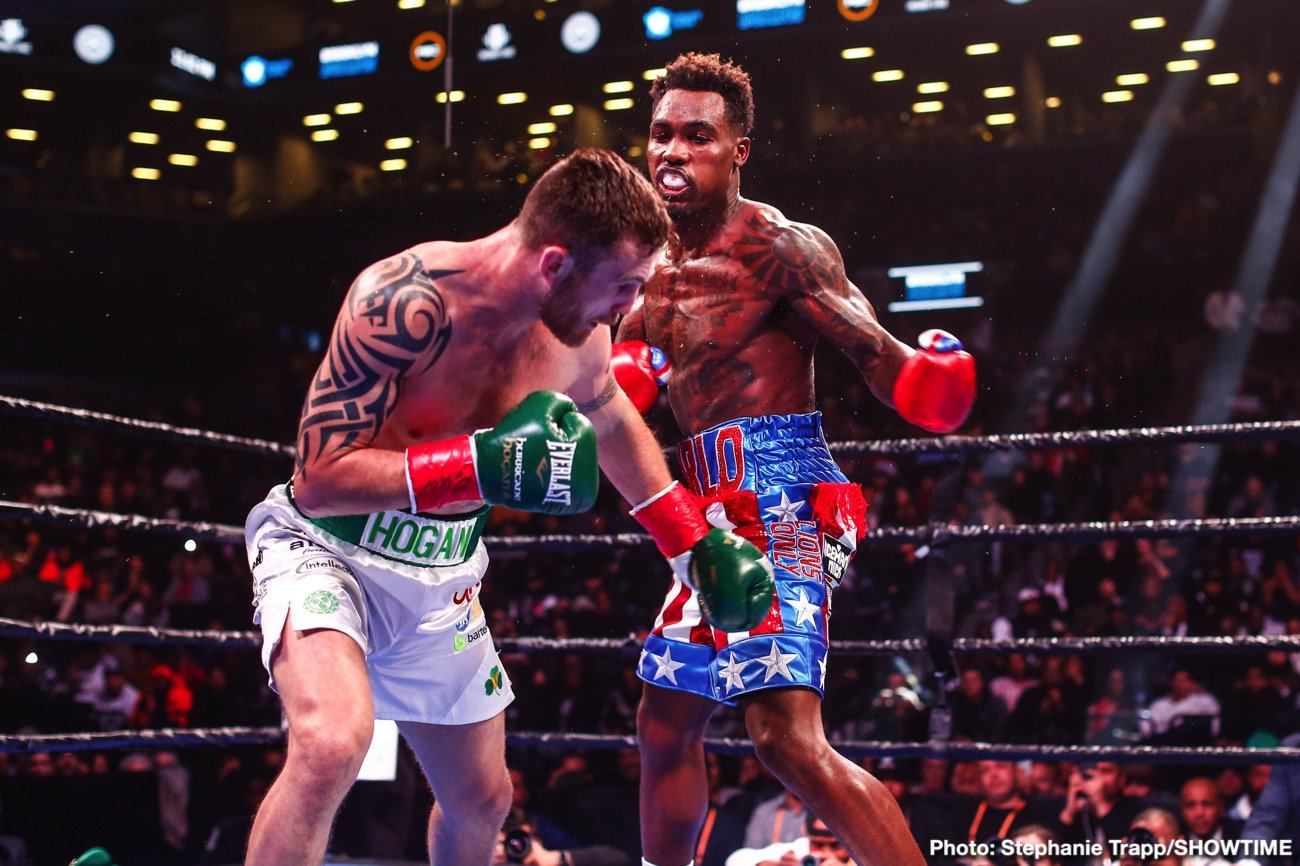 Houston’s Charlo, one of the most exciting young champions in the sport, delivered on his promise that he would close the show in spectacular fashion after going the distance in his previous two bouts. At :28 of round number seven, Charlo set Hogan up by feinting on the jab before connecting on a ferocious left hook to Hogan’s nose that sent him falling against the ropes. The 34-year-old Hogan, who was moving up after most recently challenging for the title at 154 pounds, rose to his feet before the ten count, but referee Charlie Fitch waived off the bout.

When Hogan was dropped in the seventh round, it was the third time in his career that he had been down and the second time during the fight. In the third round, a vicious left uppercut from Charlo just 12 seconds into the frame sent Hogan rolling backwards onto the canvas, but the Irishman rose quickly and acrobatically to his feet.

Despite throwing far fewer punches, Charlo had the more effective and efficient attack. Charlo landed 86 of the 266 punches he threw (32%) while Hogan landed just 71 of the 418 punches he threw (17%). Despite Hogan landing on 61 power punches compared to 57 for Charlo, Hogan was unable to hurt Charlo, while Charlo’s trademark power resulted in another highlight reel stoppage.

“I made it through 2019 and we’re going to 2020 with 20/20 vision,” said Charlo in the ring following the fight. “Shout out to Dennis Hogan for giving me real competition and for coming up to fight me.Of course my power prevailed tonight.

“We’ve been working on that (the uppercut). I try to take him out with every punch and we work hard for it. He got up and he fought like a champion. Ronnie (Shields) told me to cut him off. I just threw the shot and I made sure I threw it right on the money.

“The middleweight division is wide open. I’m the WBC Champion. I’m going to enjoy this and spend time with my team. I’m here to fight whoever. You have to make the right decisions and do it at the right time. That’s what it’s all about.”

“I wanted to keep going but the decision was fair enough by the referee,” said Hogan. “I didn’t see the punch coming on the second knockdown. I was trying to keep boxing him but then all of a sudden I was on the ground and the fight was over.

“I’m looking forward to spending the Christmas holiday with my family, taking a month off, and then we’ll work on what’s next for me.”

In the co-featured bout, Chris Eubank Jr.’s (29-2, 22 KOs) long-awaited United States debut ended in frustrating fashion as his opponent, Matt Korobov (28-3-1, 14 KOs), suffered a bout-ending injury at just :34 of the second round. Because it was ruled a self-inflicted injury, the result was officially declared a TKO victory for Eubank, who picked up the Interim WBA Middleweight Title.

Korobov, a top contender in the middleweight division, injured his left shoulder after throwing a punch that failed to land. After consulting with the ringside doctor, it was deemed that he would be unable to continue.

“I felt like I was about to get my swagger on,” Eubank told SHOWTIME reporter Jim Gray following the stoppage. “He just turned around and stopped. I was going to go jump on him. I guess something happened with his shoulder. There’s nothing to take from the fight. I threw like three or four punches. I was just warming up.”

In the buildup to the fight, Eubank, the son of British boxing legend and former two-division world champion Chris Eubank Sr., repeatedly said that there would be a new contender in the stacked middleweight division. Despite not getting a chance to introduce himself to the American audience in the way he envisioned, Eubank is looking ahead to a busy 2020.

“I’m the winner, I’m going to move forward and challenger for these belts,” said Eubank. “This wasn’t my dream. My dream was to come here to America and make a statement. Now that I’ve landed and I settled with the new promotional team, I feel I can get the ball rolling for an active 2020. It’s a shame it had to start like this, but it is what it is.”

“I was trying to throw the left hand straight, and I just felt the muscle immediately, like I pulled it,” said Korobov. “It was a lot of pain right away. I couldn’t fight with just one arm, especially being a southpaw.”

In a battle of former world champions to open the telecast, Japan’s Ryosuke Iwasa (27-3, 17 KOs) knocked out the Philippines’ Marlon Tapales (33-3, 16 KOs) with a devastating straight left-hand at 1:09 of the 11th round. With the win, Iwasa earned the vacant Interim IBF World Junior Featherweight Title.

Iwasa, who held a six-and-a-half-inch reach advantage, was more consistent throughout the entirety of the bout, stringing together multi-punch combinations. The decisive moment of the 12-round fight came in the penultimate round, when Tapales was caught with a counter left-hand that connected flush on his chin and put him sprawled on the canvas. Tapales beat the count, rising after eight seconds, but referee Shada Murdaugh waved the fight off.

At the time of the stoppage, Iwasa led on all three scorecards (97-92, 95-94, 97-92). While Tapales was more accurate throughout the night, Iwasa was busier and landed 163 total punches compared to 148 for Tapales and held a 125-99 advantage in power punches landed. In the third round, Tapales was dropped to a knee after an accidental clash of heads. The clash, which was incorrectly ruled a knockdown, caused severe swelling under Tapales’ right eye and swung a would-be 10-9 round in his favor to a 10-8 round in Iwasa’s favor.

“I knew that I had him hurt in the 11th round and I was ready for the finish if the referee had let him keep fighting,” said the 29-year-old Iwasa. “It was a tough fight but I trained really hard for this performance. My height and reach was definitely an advantage. I was able to put my punches together well. He never hurt me but he was still difficult and I had to focus to figure him out.

“We’re ready for anyone next. I’m going to keep working hard to become a world champion again next year.”

On Saturday’s telecast it was announced that former two-division world champion Danny Garcia would return to the ring on Saturday, January 25 live on SHOWTIME from Barclays Center. During an interview with SHOWTIME Sports host Brian Custer, Garcia discussed his anticipated return to the ring.

“January 25, I’m back at Barclays Center, my home away from home,” Garcia said. “It’s a great atmosphere. Every time I’m here, I get the jitters, so I just can’t wait to be back. I’ve been in the gym for a month. I’m already ready. I don’t know who my opponent is, but whoever they put in front of me, I’m ready to get it on.

“First of all, thank God (Errol) Spence is doing good. I hear that he’s recovering well. I was really looking forward to fighting him but maybe he could be next after January 25. Pac-Man (Manny Pacquiao) or Spence, that’s who we want. 2020 is going to be a big year for me.”

Prior to the telecast on SHOWTIME, SHOWTIME CHAMPIONSHIP BOXING COUNTDOWN streamed live on the SHOWTIME Sports YouTube channel and SHOWTIME Boxing Facebook page and saw Ronald Ellis (17-1-2, 11 KOs) win a majority decision over Immanuwel Aleem (18-2-2, 11 KOs) in their 10-round super middleweight fight.

The back and forth affair saw both men grab the momentum of the fight at different points, but it was Ellis’ activity and ability to box effectively from the outside that gave him the edge. While one judge had the fight 95-95, he was overruled by two scores of 98-92 and 97-93 for Ellis.

Hawton came back after being dropped by a powerful left hook from Villalobos in the sixth round. Hawton was saved by the bell in the round and finished the fight strong, punctuating the action getting the best of several exchanges in the late rounds to win by the score of 95-94 on all three cards.