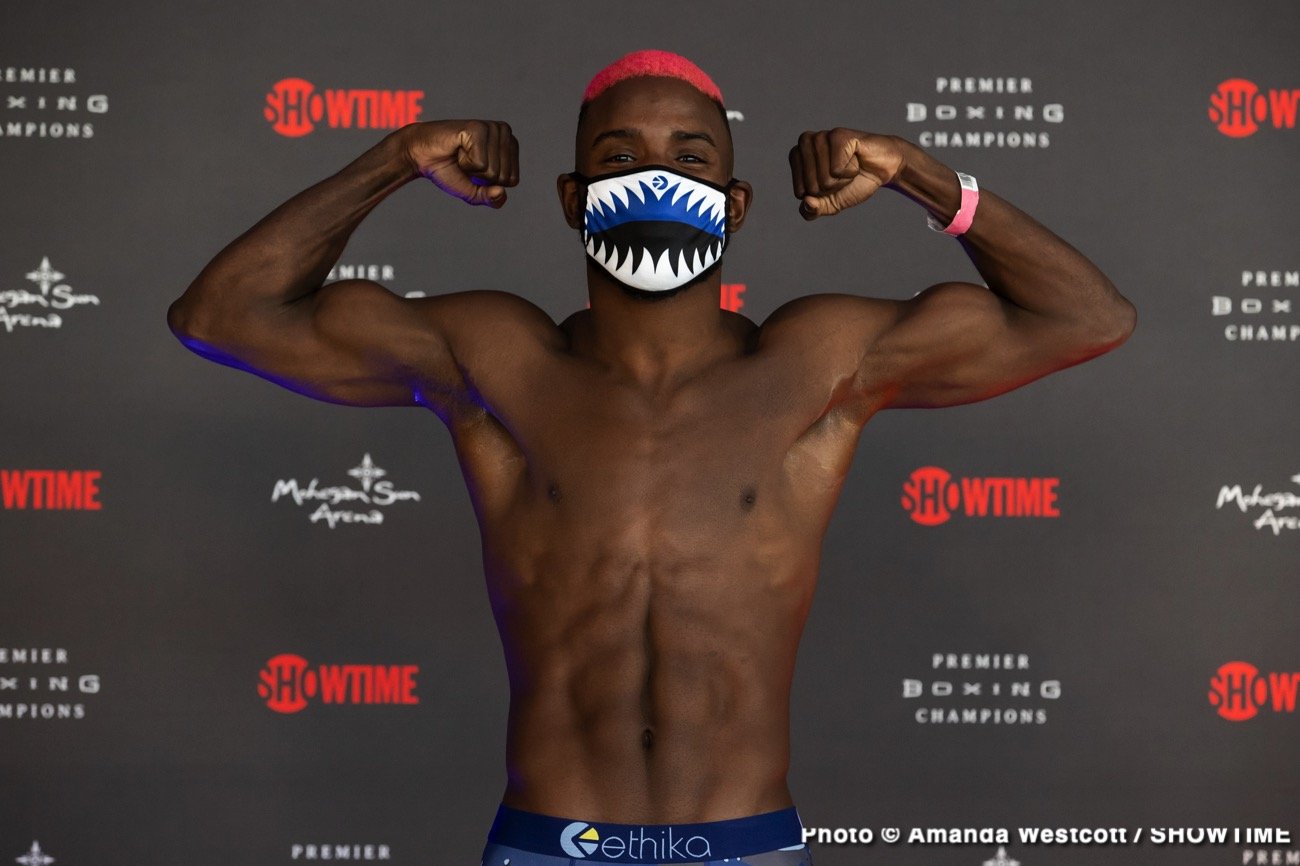 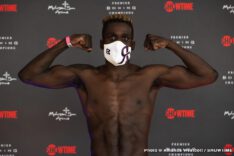 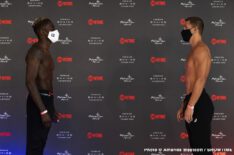 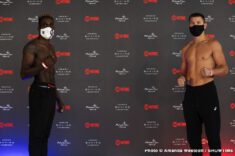 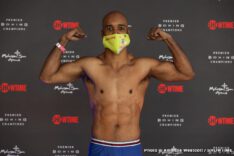 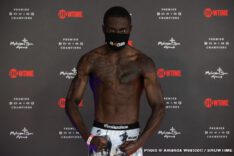 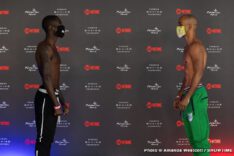 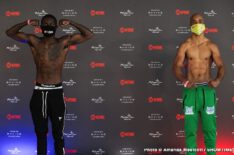 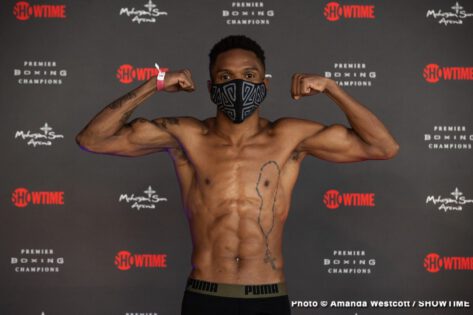 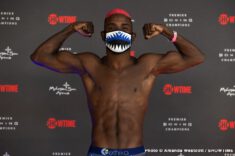 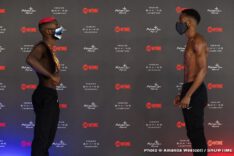 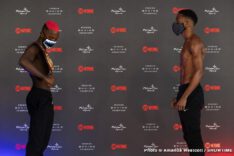 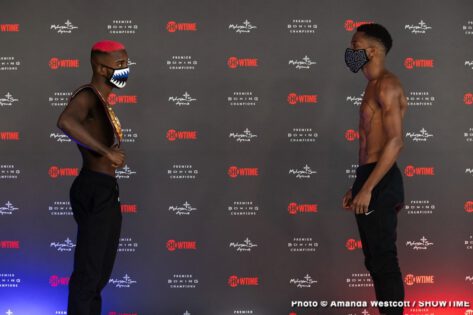 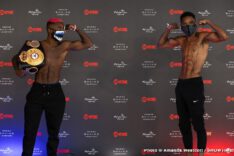 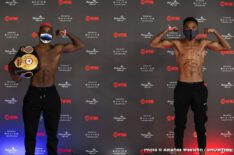 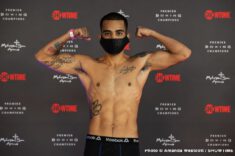 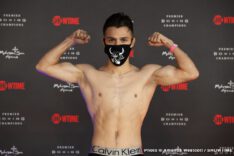 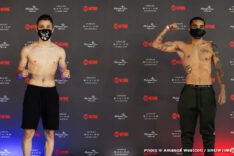 NOTE: Saturday’s SHOWTIME BOXING: SPECIAL EDITION telecast will include highlights from highly regarded featherweight prospect David Navarro’s second professional fight. The 21-year-old Los Angeles native opted to forgo the chance to represent the U.S. at next summer’s Olympic Games in Tokyo, turning professional in October and putting an end to a decorated amateur career that saw him win multiple national titles. The talented Navarro comes from a boxing family which includes his uncle Jose Navarro, a 2000 U.S. Olympian and older brother Jonathan, an undefeated 140-pound prospect. Navarro earned a first-round TKO in his October pro debut.

Also discussing their respective clashes were rising super lightweight Richardson Hitchins and former champion Argenis Mendez, who meet in the 10-round co-main event, and middleweight contenders Ronald Ellis and Matt Korobov, who battle in a 10-round duel to open the SHOWTIME BOXING: SPECIAL EDITION telecast.

“I didn’t watch the film on Arboleda. And I know he will come game, and I know his trainer will have him in great shape and ready to fight. I am coming to execute my game plan on Saturday night on SHOWTIME. And I am just going to be me – ‘Primetime’ – and this time on primetime TV.

“I feel I am one of the best at 130-pounds, but until I prove that in the ring, I can’t consider myself the best in the division yet. And I want to get in there with the top five guys. I know I can beat any champion in this weight class.

“Chris is a perfect fighter and a great boxer. He is at the top of the division as far as his boxing skills. On Saturday night, I am going to test him. I don’t think Chris has been tested as I have. I was tested in my last fight against Jayson Velez and came out victorious. Chris is not as strong as Velez.

“Colbert’s biggest downfall will be his arrogance. He doesn’t have the firepower to finish me with one punch. He’s not a puncher like that. He picks his shots and moves. He’s a boxer, and I am a boxer-puncher.”

“After a year like this, I’m just ready to finish it off in spectacular fashion. I was blessed to have two great opportunities with SHOWTIME in 2020; now, it’s time to do my part and give the fans a show. I feel great, and it’s going to show on Saturday night.

“My opponent is going to come with everything he has, and so am I. I’m not making promises. I’m just going to show the world my God-given ability and all the work I’ve put in. Be sure to tune in to watch me and my brother Chris Colbert go to work!

“They say Mendez is a tricky guy and a guy with a known name. I don’t think he has that elite-level experience. I know deep in my heart that I am better than him, and on Saturday night, I will prove it.”

“Hitchins is not ready for this fight. In my last four fights, I have fought fighters better than him. I think Juan Heraldez and Anthony Peterson were better fighters. I have watched him a lot, and I don’t see anything special in him.

“During the pandemic, I’ve been able to work on some things that I needed to. I stayed in shape the whole time. And I don’t drink or smoke. I stay healthy. It wasn’t difficult to find sparring. I have some tall, fast sparring partners who helped me prepare.

“And I want to dominate this young kid. I want to show you my skills and show that I am still here, still dangerous, and I can still fight. I want to fight for a world title again.”

“Korobov is a slick boxer, and he’s got a lot of experience, but this fight is about me getting punches in bunches. If I stay on him, it’s going to be hard for him to set up anything.

“It’s been a year since his shoulder injury, but he’s on the older side now, so I doubt he’s fully recovered. We’re going to test that.

“My next fight after this is going to be big. That’s what I am using this fight for. He is thinking he’s going to win and try to get a rematch with Jermall Charlo. I am using it for the same thing, except it’s not a rematch; it will be my first time against the big guys. I think I deserve to be there, and I think this fight is going to be my showcase.”

“It’s been exactly one year since my last fight. My shoulder feels good, and my preparation went well. I am in the best shape I can be for this fight. And I didn’t watch many films, but I studied enough to set my Saturday night preparations. I focused more on the work that I needed to do in the gym to get myself ready.

“After a couple of months of healing, my manager tried to get the rematch with Chris Eubank Jr., but we got no answer and had to move on to get back in the ring. Ronald Ellis was the first name they brought up, and I told them, ‘yes,’ right away. I want a rematch with [Chris] Eubank Jr., but I guess it will never happen. We’re on to a big fight against Ellis on Saturday.”