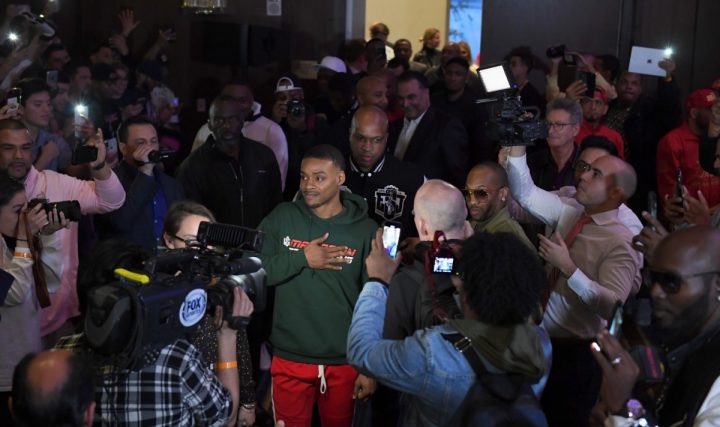 De La Hoya is interested in getting Spence to agree to take the fight with the 28-year-old Canelo (52-1-2, 35 KOs), who needs an opponent for his next fight on DAZN. This would be Alvarez’s third fight or his 11-fight, five-year, $365 million deal with DAZN. He’s beaten beaten WBA ‘regular’ super middleweight champion Rocky Fielding and IBF middleweight champion Daniel Jacobs in his first two fights on DAZN.

Canelo needs to keep moving forward fighting popular guys in order to help drive up the subscribers to DAZN. His first fight of his five-year contract with DAZN against Fielding last December was basically a throwaway match against a fighter without a large fan base in the U.S, and with little name recognition. Worst of all, the fight wasn’t competitive in the least. Canelo marched into the center of the ring, and blasted Fielding out in three non-competitive rounds. In that respect, Canelo didn’t do as good a job in knocking Fielding out as Callum Smith did in stopping him in the first round in their fight in 2015.

Spence is in a good position right now to get top dollar for fights DAZN fighters like Canelo, Gennady Golovkin, Danny Jacobs and Demetrius Andrade. These fighters only have a handful of options in fights against each other. The middleweight division isn’t all that stacked with stars and talented fighters. Once one goes beyond GGG, Jacobs, Canelo, Andrade and Jermall Charlo, there’s scarcely anyone else for the top dogs in the division to fight. It’s getting worse for Canelo and GGG, as Jacobs is starting to look shot, and his promoter Eddie Hearn is saying that he’ll probably move up to super middleweight in order to gain more energy. Hearn believes the reason Jacobs looked so listless against Canelo was he’s fighting hard to make 160 weight limit for the division. So, unless some the welterweights like Spence, Thurman, Danny Garcia, Porter and Terence Crawford are willing to move up to 160, guys like Canelo are going to soon run out of opponents to fight. That’s one reason why De La Hoya is so eager to get Spence to move up to middleweight to take on Canelo in September.

Does Spence deserve more than $20 million for Canelo fight?

“I am letting you know that we love the fight as well and I’ve always said that Errol Spence is one of the most talented fighters out there,” said De La Hoya said to Dan Rafael at ESPN.com. “There’s no reason why Spence can’t move up to middleweight if Mikey Garcia could go up (from lightweight) to welterweight to fight Spence. And if Spence fights Canelo, it will be the most money Errol Spence will ever make. I would love to start the ball rolling. Let’s do it. We just want to get Canelo the best fights and the toughest challenges out there,” De La Hoya said.

Spence isn’t signed with DAZN, so it’s to hard to know how a fight between him and Canelo would workout. Spence is with Premier Boxing Champions and fights on FOX. Would DAZN be open to letting a fight between Canelo and Spence be shown on Fox Sports pay-per-view as well as on their streaming service? The viewing audience would be split if Canelo vs. Spence fight is shown on both DAZN and FOX, meaning their would be far fewer subscribers for them. It’s a win-win for Canelo and Spence though, as their fight would be seen by a massive amount of boxing fans, but it might not be as good of a deal for DAZN as last Saturday’s middleweight unification fight between Canelo and Jacobs (35-3, 29 KOs) was in their fight at the T-Mobile Arena in Las Vegas, Nevada. Canelo won the fight by a 12 round unanimous decision by the scores 115-113, 115-113 and 116-112. Canelo-Jacobs wasn’t the most entertaining fight that one will ever seen, but it was a successful event in terms of the subscribers that were brought in. The fight was seen by over 1.2 million viewers.

Will Spence agree to give Canelo the advantages?

Canelo is accustomed to getting things his way as far as venue, purse and rehydration clause. Some boxing fans think Golovkin, Erislandy Lara and Austin Trout got the short end of the stick when it came to the judging with their fight against Canelo. Jacobs openly complained about the rehydration clause that limited him and Canelo to being no higher than 170 pounds for the secondary weigh-in on the morning of the fight. Jacobs came over the weight limit in weighing in at 173.6 lbs, which meant that he would have to pay close to $1 million in a weight penalty. Will Spence and his adviser Al Haymon of Premier Boxing Champions allow Canelo use rehydration clauses, get the larger purse, gloves, and pick out the venue by insisting the fight take place in Las Vegas? Spence is young at 29, and considered now the star in the welterweight division. If Canelo and Golden Boy choose try and stack advantages in their favor, Spence might not go a long with the program the way that Jacobs, Golovkin and past Canelo opponents have done. Jacobs and GGG are older guys, and don’t have the time that Spence has. Even though Spence is one year older than the 28-year-old Canelo, he doesn’t have as much mileage on him, and he’s not plagued with stamina problems that we’ve been seeing with the Golden Boy star. Spence is dominating opposition at 147. Canelo has been squeaking by with his close wins over Golovkin and Jacobs.

Spence would be taking a big risk facing Canelo

It might not be worth it for Spence to risk fighting a guy two divisions above him in Canelo. Kell Brook and Amir Khan, two highly popular welterweights from Great Britain, met with disaster when they chased paydays in moving up to middleweight to take on Golovkin and Canelo in their respective fights. Khan was knocked out cold by Canelo in 2016, while Brook suffered a fractured eye socket in his fifth round stoppage loss to Golovkin in 2016. Is $20 million enough for Spence to risk his health and career in moving up to middleweight to fight Canelo? If Spence is injured by Canelo, it could hurt his ability to return to the form that he was at previously at welterweight. $20 million is a lot of money, but if Spence’s career is finished by Canelo, then it’s not going to be a good deal for him. It would be better for Spence to take the smaller paydays at 147 against guys his own size, who don’t hit as hard as Canelo. It would be the same risks for Canelo if he moves up to light heavyweight to take on one of the champions in that weight class. It’s interesting that Canelo is talking of wanting to fight WBO 175-pound champion Sergey Kovalev and not IBF champ Artur Beterbiev, who is looking very powerful right now. Beterbiev has the inside game to make things really tough for Canelo if he were to move up to that weight class in search of glory.