Berchelt vs. Vargas and Navarrete vs. Dogboe – Official Weights 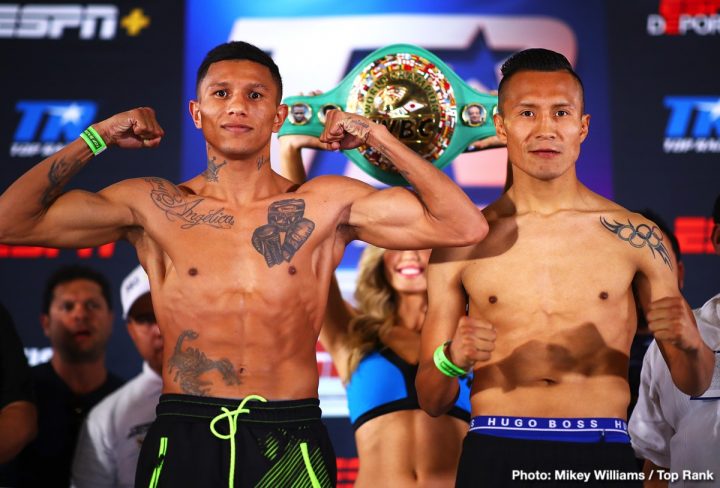 By Aragon Garcia: WBC super featherweight champion Miguel Berchelt and challenger Francisco Vargas made weight on Friday for their headliner fight, and WBO super bantamweight champion Emanuel Navarrete and former champion Isaac Dogboe weighed successfully for their respective fights on Saturday fight on LIVE on ESPN and ESPN Deportes at the Convention Center, in Tucson, Arizona. The card on ESPN will start at 10:00 p.m. ET/7:00 p.m. PT. The undercard bouts will be LIVE on ESPN+ beginning at 6:30 p.m. ET 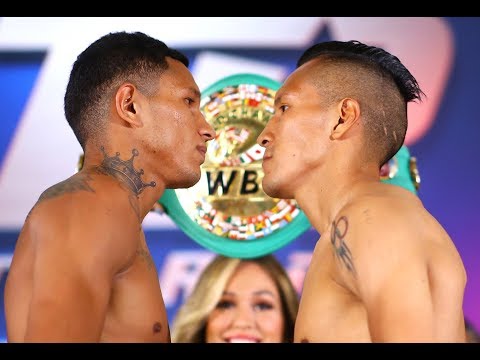 Berchelt (35-1, 31 KOs) weighed in at 130 pounds, as did the 34-year-old former WBC champion Vargas (25-1-2, 18 KOs). Although Vargas technically only has one defeat on his record from his 11th round knockout loss against Berchelt in January 2017, many boxing fans believe Vargas deserved a loss to Orlando Salido in their fight in June 2016, which was scored a 12 round draw. Salido fought well enough to deserve a clear victory.

Berchelt looked so much better in dominating Vargas in their fight 2+ years ago in January 2017, that’s it’s difficult for this writer to see a scenario in which the outcome of the rematch will be any different than last time they fought. You can say that Vargas has looked good in winning his last two fights since that in defeating Stephen Smith and Rod Salka, but those fighters are so far below the level of where Berchelt, it’s impossible to get an accurate gauge of whether the 34-year-old Vargas has found Spanish explorer Juan Ponce de León’s Fountain of Youth and drank from it’s youth restoring waters. The way that Vargas performed against Smith and Salka was impressive, but those fighters are elite or even close to being elite level guys.

Vargas is going to be attacking Berchelt like he did in his fight against Takashi Miura in 2015. Vargas has got to fight Berchelt like that, because it’s the only style of fighting that gives him any kind of problems. Berchelt is too effective when he’s on the outside boxing behind his powerful jab. Vargas had some moments two years ago in their fight in 2017 when he was attacking him full throttle. Miura gave Berchelt some problems as well when he was hitting him with everything he had. It’s not easy to fight like that against Berchelt due to his excellent jab and power. 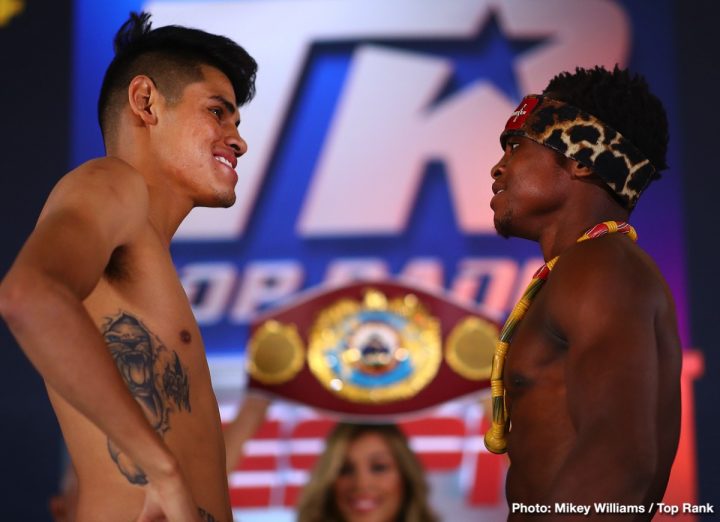 In the co-feature weights, WBO super bantamweight champion Navarrete (26-1, 22 KOs) weighed in 121.6 lbs, and challenger Dogboe (20-1, 14 KOs) weighed in at 121.4 lbs. These two talented fighters went at it on December 8 last year at Madison Square Garden in New York. Navarrete, 24, used his size and power advantage to really workout over Dogboe, battering him with shots, and controlling the fight. Surprisingly, the judges scored it close in giving Navarrete the victory by the scores 115-113, 115-113 and 116-112. Boxing News 24 had Navarrete winning by a 117-111 score. Dogboe fought as well as he could, but he didn’t possess the power or the size to reach Navarrete. Dogboe was getting hit with some tremendous shots in each round, and it was difficult for him to rounds conclusively. The power difference between the two fighters was extraordinary. The 5’7” Navarrete had so much more on his shots than the smaller 5’2” Dogboe.

Navarrete is going to looking to start in where he left off in beating the smaller Dogboe with his power shots, and making him pay each time he looks to engage. Before meeting up with Navarrete, Dogboe had been able to beat his stronger opponents like Jessie Magdaleno and Cesar Juarez with his superior engine. Dogboe pushed a fast pace that those guys couldn’t keep up with, and then he turned it up a notch to score knockouts. Dogboe couldn’t do that against Navarrete, because he didn’t run out out of gas like Magdaleno an Juarez did. It was risky for Dogboe when he started to take the fight to Navarrete, considering it left him in the position where he was running into big shots when he was attacking him in the second half of the fight. As a matter of fact, Dogboe took more heavy shots from Navarrete in the second half of the fight than he did in the first six rounds, given how desperate he’d become by that point in the fight. Dogboe thought he could walk Navarrete down and wear him out with shots, but that didn’t work.

“I have fought in Arizona before (first-round KO over Hidenori Otake in Glendale), and the fans there are tremendous,” Dogboe said. “I know a lot of Mexican fans will be in attendance to see Navarrete, but I am coming for my title. He’s a nice guy and a great champion, but this is about redemption for me. I am ready to go to war. I don’t see this as a distance fight. I am came coming for the knockout and to regain my title in spectacular fashion,” Dogboe said.

Dogboe is blaming his previous loss to Navarrete on his conditioning instead of giving him credit for having been the better fighter on the night. In looking back at that fight, Dogboe was going as hard as he could. He had his foot firmly on the accelerator all the way to the floor, but it was no use. Navarrete met Dogboe’s attacks with powerful right hands and left hooks that was rattling him. If Dogboe tries to push the pace of the fight faster than he did last December, he’s going to run into something from Navarrete and wind up on the canvas. Navarrete hits too hard, is too big and way too experienced for him to be worn down by Dogboe trying to wear him down with his attacking style. You can’t blame Dogboe for wanting to fight like that though. He doesn’t have much choice, does he? Dogboe is going to get torn apart if he stays on the outside the entire fight.

Other weights for Saturday’s Berchelt-Vargas 2 card