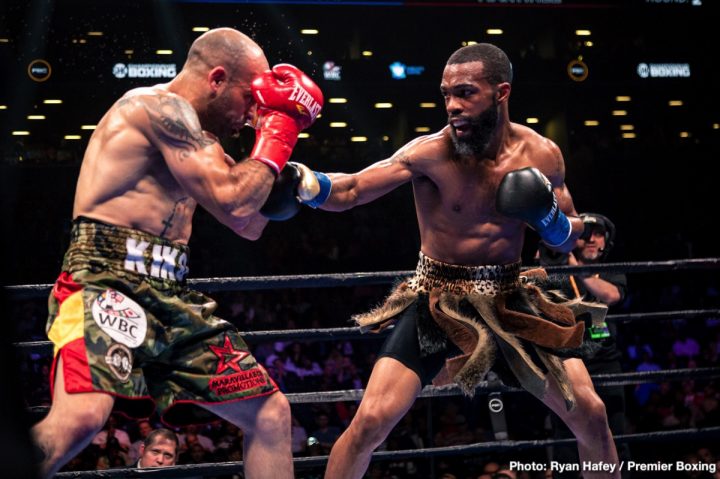 By Tim Royner: WBC featherweight champion Gary Russell Jr. met with Matchroom Boxing USA/DAZN promoter Eddie Hearn on Friday to discus signing with his company. Russell Jr. (30-1, 18 KOs) recently revealed that he’s a promotional free agent after having been with Premier Boxing Champions for a number of years.

Hearn and Russell Jr. talked about a multi-fight deal, according to Mike Coppinger. If Russell Jr. does sign with Hearn, it’ll give the British promoter a major chess piece to use to match against some of his other fighters in his Matchroom stable.

Inactivity is a major concern with Russell Jr.

Russell Jr. has fought just four times since 2016. Some believe that he’s only interested in fighting once a year in order to help preserve himself. If Russell Jr. only wants to fight on an annual basis, Hearn might not be getting a great deal in signing him to his Matchroom stable. It’ll be an impossible task in Hearn turning Russell Jr. into a star if he’s only fighting once a year, and mainly against weak opposition like Kiko Martinez, Oscar Escandon and Patrick Hyland.

Despite having loads of talent, Russell Jr. has failed to become the huge star that many boxing fans thought he would be after he turned pro in 2009. Russell Jr. boxed his way into the 2008 U.S Olympic team, but was unable to take part in the Olympics after losing consciousness before the weigh-in. Russell Jr. lost to Vasiliy Lomachenko by a 12 round majority decision in a failed bid to win the World Boxing Organization featherweight title in June 2014. However, Russell Jr. was able to bounce back from that loss to capture the WBC featherweight title in stopping champion Jhonny Gonzalez in the fourth round in March 2015.

Since winning the WBC 126-pound title, the match-making – and the activity for Russell Jr. – has been a huge let down. Russell Jr. has defended his WBC title four times in beating Kiko Martinez, Patrick Hyland, Joseph ‘Jo Jo’ Diaz and Oscar Escandon. Russell Jr. is 30-years-old now, and he talks continuously about wanting to fight WBA Super World 126-pound champion Leo Santa Cruz.

“SOURCES: Gary Russell Jr. met with Eddie Hearn today in D.C. area to discuss multi-fight deal with Matchroom/DAZN. Featherweight champ said this week he’s a free agent (he’s long been with PBC) and since his comments he’s been hotly pursued. Would be a major signing for Hearn.”

If Hearn signs Russell Jr. to a multi-fight deal, we could be seeing the contract end many years from now if he continues to fight only once a year. For example, a three-fight deal with Russell Jr. could end in 2022 if he chooses to fight on an annual basis. Russell Jr. has already fought once in 2019 against Kiko Martinez. If Russell Jr. chooses not to fight again until 2020, then that would be the first fight of his multi-fight contract with Hearn if he signs with him. The only way it makes sense for Hearn to ink Russell Jr. is if he can get a guarantee that he’ll try and fight twice a year.

Does Hearn have fights for Russell Jr?

Russell Jr. signing with Hearn only makes sense if he’s got the fighters to match against him. There’s no point in Russell Jr. inking a contract with Hearn’s Matchroom USA stable if he’s not going to keep him any busier than he’s been with PBC.