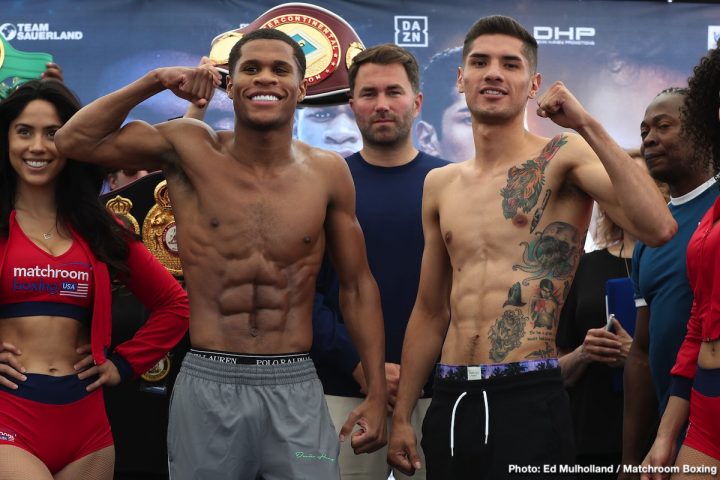 By Chris Williams: Undefeated lightweight contender Devin Haney, and heavyweights Michael Hunter and Filip Hrgovic are all in action tonight on DAZN in separate bouts at the MGM National Harbor in Oxon Hill, Maryland. In the headliner fight, Haney (21-0, 13 KOs) will be facing the capable 26-year-old Antonio Moran (24-3, 17 KOs) in a 10 round fight.

Moran was recently beaten by former two division world champion Jose Pedraza (25-2, 12 KOs) by a close 10 round unanimous decision last June in Las Vegas, Nevada. Moran came close to winning, but lost by the scores 96-94, 96-94, and 96-94. Haney’s promoter Eddie Hearn of Matchroom Boxing USA has obviously selected Moran as a test to get the young 20-year-old Haney ready for an eventual world title shot at some point in the future. Haney is seen as a superstar in the making. It remains to be seen whether that will actually happen.

Haney is a good fighter, but he lacks hand speed and punching power. Haney has speed and power, but not quite where it needs to be for him to be able to tackle the more talented fighters in the lightweight division like Vasiliy Lomachenko and Teofimo Lopez. Those guys are a cut above Haney. The good news for Haney is Lopez is planning on moving up in weight to the 140-pound division in 2020, and Lomachenko is talking about moving back down to 130 once he unifies the 135-pound division. After Lopez and Lomachenko clear out, Haney has a good chance of winning the World Boxing Council lightweight division, and perhaps unifying the division. Unless some other talented fighter comes along, Haney could be the next star in the lightweight division once Lomanchenko and Lopez are gone.

British promoter Hearn was hoping that Haney, ranked #4 WBC, would contest for the vacant WBC lightweight title against #1 WBC Luke Campbell(20-2, 16 KO)s. But the WBC blew apart Hearn’s plans by revealing the bad news that Campbell instead would need to face WBA/WBO 135-pound champion Lomachenko for the vacant WBC lightweight title that was recently vacated by Mikey Garcia. Hearn promotes Campbell, which is why he wanted him and Haney to contest for the vacant WBC belt. So instead of Hearn having only his hands on the controls for a fight for the vacant WBC lightweight strap, he’ll need to share the controls with the Top Rank promoted Lomachenko. It would have been a win-win situation for Hearn if Campbell and Haney had fought for the vacant WBC belt, as the winner of the fight would be one of his own Matchroom fighters. Even the loser would come out ahead due to the attention the fight would receive in the boxing world. But with the way the WBC has set it up now, the 31-year-old southpaw Campbell will have to fight the talented two-time Olympic gold medalist Lomachenko (13-1, 10 KOs) in a fight that he has very little chance of winning. Not only does Campbell have next to no chance of winning, but it’s likely that he’s going to take a one-sided beating that will be embarrassing for him.

The way that Lomachenko dominates his opponents, they often end up quitting, and that’s a bad look for them. You can argue that Lomachenko dominates his opponents to such an extend that they lose popularity with fans afterwards. Campbell, 31, can’t afford to be beaten like that, because he’s up there in age. That age isn’t old for normal fighters in the higher weight classes, but it is for the lower weights. Haney would have had an excellent chance of beating Campbell in a competitive fight. Unfortunately, that’s not going to happen. Lomachenko will likely destroy Campbell just like he did to one of Hearn’s other fighters Anthony Crolla last April. If Lomachenko decides to hold onto the WBC lightweight title for a year or so, he’ll probably beat Haney just as bad as he’ll do to Campbell. There are levels in boxing. Haney and Campbell are nowhere close to the level Lomachenko is at. If Loma holds onto the WBC belt a long time, then Haney will need to consider moving up to 140, because he can’t just sit and wait forever for Lomachenko to move back down to super featherweight.

In his last fight, Haney defeated previously unbeaten Xolisani Ndongeni (25-1, 13 KOs) by a one-sided 10 round unanimous decision on January 11, in Shreveport, Louisiana. Haney looked good in that fight against a limited fighter with an inflated resume. Ndongeni was a prime example of how promoters are able to build their fighters up to create the mystique of being invincible by matching them carefully against weak opposition.

Haney should have no problems beating Moran tonight. Moran was out-boxed by Pedraza last June. Moran isn’t a big puncher, and he’s not super fast. Haney will be able to beat Moran tonight. Hearn has obviously done his homework in checking out Moran to make sure he’s not a threat to Haney.

Haney wins by sixth round knockout.

Heavyweight Michael ‘The Bounty’ Hunter (16-1, 11 KOs) was on the list of potential opponents for IBF/WBA/WBO champion Anthony Joshua’s June 1st fight at Madison Square Garden in New York. Hearn, who promotes the 30-year-old Hunter, decided to go with the more experience and slightly better known 2012 U.S Olympian Hunter. With that said, Hunter will be getting a title shot against Joshua in the near future, as long as he keeps winning. With the way that Hearn is matching Hunter, he’s not going to lose anytime soon.

Hunter will be fighting 39-year-old Brazilian Maldonado (26-2, 25 KOs) tonight in a 10 round fight. Maldonado comes into the clash having lost his last two matches against unbeaten Oleksandr Teslenko and Oscar Rivas. Both defeats were lopsided 10 round decisions. Maldonado showed a good chin in both fights in going the distance, which is obviously what Hearn liked about him. Maldonado will give Hunter some rounds tonight if nothing else. There’s no risk of Hunter losing to Maldonado, as the Brazilian fighter isn’t that kind of a talent. He’s another fighter with an inflated record, who was exposed once he tried stepping up a level against Teslenko and Rivas.

Since his 12 round decision loss to Oleksandr Usyk in 2017, Hunter has won his last four fights in beating Alexander Ustinov, Martin Bakole Ilunga, Terrell Jamal Woods, and Iago Kiladze. Hunter was a better fighter at cruiserweight than he is at heavyweight, but there’s no money to be made in that division. Hunter will make a lot of money challenging IBF, WBA & WBO heavyweight champion Joshua for his titles either later this year or in 2020. Hunter isn’t going to go back down to cruiserweight and make very little money in that weight class. At heavyweight, Hunter is a good high volume puncher. Hunter surprised a lot of boxing fans in defeating the much bigger Bakole (12-1, 9 KOs) in stopping him in the 10th round last October. Bakole looked exhausted from the high pace that Hunter set in the fight.

It would be a big accomplishment for Hunter to knockout Maldonado, but it’s unlikely to happen. Hunter is still a cruiserweight in terms of his punching power and physique. Although Hunter has packed on some pounds since moving up to heavyweight, he just looks an out of shape cruiserweight. Hunter looked lean and cut up when he fought at cruiserweight. In moving up to heavyweight, Hunter has rolls of fat hanging off his upper body, and he’s not put on the right type of weight. Hunter’s punching power hasn’t improved in moving up to heavyweight, which isn’t surprising given how fat he’s looking now. He weighed in at 213 pounds for his last two fights against Bakole and Ustinov, but he looked like he was carrying around an extra 20 lbs of fat. Hunter needs to hit the weight room to take off the fat, and put on some muscle.

This will be an easy 10 round unanimous decision win tonight for Hunter of Maldonado. Hunter doesn’t hit hard enough to stop Maldonado.

2016 Olympic super heavyweight Filip Hrgovic (7-0, 5 KOs) is another fighter that figures to get a title shot against Anthony Joshua in the near future, if only because he’s with the same promoter Eddie Hearn. Hrgovic will be fighting 38-year-old American Gregory Corbin (15-1, 9 KOs) in a 10 round fight. It’s unknown why Hearn picked an American for the 6’5″ Hrgovic to fight. Perhaps he thinks that U.S boxing fans will rally behind Corbin and get excited about the Hrgovic. That’s not going to be the case. The casual boxing fans in the States have not heard of Corbin or Hrgovic, and they won’t just blindly support an American fighter just because he’s from the same country as them. That’t not how U.S fans are. In watching undercard fights, the fans want to see exciting and competitive matches. Sadly, Hrgovic vs. Corbin figures to be neither exciting or competitive. This is just a mismatch. Hopefully, it’s somewhat entertaining. Given the lack of experience and the advanced age of the 38–old Corbin, his fight is probably not going to last too long unless Hrgovic decides to carry him. Corbin is coming off of an eight round disqualification fight against former IBF heavyweight champion Charles Martin last March. Corbin was disqualified for throwing repeated low blows. It would be a pity of that’s what we see tonight. You’d have to put it on Hearn for picking out Corbin as Hrgovic’s opponent. When you have a fighter that is coming off of a disqualification loss for fouling, that should be a red flag to alert you not use that guy an opponent for one of your young prospects. Hearn is obviously hopeful that Corbin won’t start fouling tonight once the bell sounds. With Hrgovic’s Olympic experience, Hearn should be matching him up a lot better than he’s been doing. He’s been matching Hrgovic like he would for a fighter that had no experience at all in the amateur ranks. It’s a waste of Hrgovic’s time to be matched against fighters like Corbin.

In Hrgovic’s last five fights, he’s beaten these fighters: Kevin Johnson [39-years-old], Amir Mansour [46-years-old], Filiberto Tovar, Sean Turner and Tom Little. Those are guys well below Hrgovic’s talent level, and arguably a waste of his time to have fought them. It would be a shame if Hearn still has Hrgovic fighting these type of guys four years from now when he’s 30-years-old. Hrgovic would likely be moved much faster if he were with Top Rank. They wouldn’t waste time before putting him in with good opposition.

Hrgovic will likely stop Corbin by the third round. This is a horrible fight, and it should end quickly depending on how motivate Hrgovic is in getting it out with.

2016 Olympic gold medalist Daniyar Yeleussinov (6-0, 3 KOs) will be fighting against an opponent still to be determined in an eight round fight. Hearn still hasn’t revealed who the 28-year-old Yeleussinov will be facing. It’s too bad Hearn doesn’t match him against Josh Kelly in a rematch of their fight in the 2016 Olympics. Yeleussinov defeated Kelly by a 3-0 score. As a pro, Yeleussinov has been matched weakly by Hearn for some reason. He’s had six fights against a mix of journeyman and novices. Given Yeleussinov’s age and the fact that he’s an Olympic gold medalist, he needs to be hurried along, but that’s now happening. If Yeleussinov is still fighting the same level of opposition four years from now when he’s 32, you have to feel sorry for him. This is another fighter that Hearn needs to take the training wheels off and start matching him tough. Yeleussinov should be fighting the likes of Yordenis Ugas, Josesito Lopez and Jessie Vargas right now.