Russell (31-2, 18 KOs) claims that he was shocked when the judges’ scores revealed that Magsayo (24-0, 16 KOs) had won a 12 round majority decision, as he felt that he’d outclassed the challenger in every department.

The judges scored the fight for Magsayo based on him outworking Russell in rounds 1 through 4 and 9 through 12. In those rounds, the 33-year-old Russell Jr failed to through enough punches to convince the judges that he deserved to win them.

It’s a bitter pill for Russell Jr. to swallow losing his WBC 126-lb title after reigning as the champion for seven years, from 2015 to 2022.

In the end, the right shoulder injury that Russell Jr. sustained during training camp impacted his performance last night, preventing him from getting his shots off.

If possible, Russell Jr. says he’d like a rematch with the 26-year-old Magsayo, saying that he believes he’ll beat him even worse when he’s healthy than he did last Saturday night.

It’s unclear which direction Magsayo will go in for his next fight, as he says he needs to speak with his management about what the plans are.

“I beat that boy ten rounds to 2, 9 to 3, man,” said a bitter Gary Russell Jr. on social media after his loss to Magsayo. “I took the old boy to school. Y’all seen what it was.

“They’ve been trying to get [bleep] out of the way. I been [bleep] my arm up two weeks before the camp. To be honest with you, I outclassed him, out-schooled him, and outboxed him with one arm. I got a torn tendon in my s***.

“I knew my arm was hurt going into the fight,” said Russell Jr. “I already stated that I had an injury coming in, but I didn’t want to reveal what the injury was.

“I believe I outclassed him and out-skilled him in at least nine rounds to 3, or 10 rounds to 2,” said Russell Jr. in believing that he deserved a comprehensive decision win over the mandatory challenger Magsayo.

The judges were swayed by the activity from Magsayo in the first four and last four rounds of the contest. Those were rounds where Russell Jr. wasn’t putting out enough offensive firepower to win them against the young challenger conclusively.

Gary surprised by the judges’ decision

“When he wanted to fire any shots, I would slide in, smother him and take away any effective shot he attempted to try and throw. My ring generalship and boxing IQ spoke for itself.

“Of course, I was surprised at the decision, but  I’m a warrior. I refuse to postpone this fight after a near two-year layoff. I wanted to get back in there and display my skill set, and I believe that I did so with one arm and a tough opponent.

“Like I said, ten rounds to 2, 9 rounds to 3 hands down,” said Russell Jr. on his assertion that he deserved a wide points decision over Magsayo.

Russell Jr’s trainer should have told him what he was up against going into the championship rounds because it shouldn’t have been a surprise that he lost.

We didn’t see a sense of urgency from Russell Jr. in rounds  9 to 12 to show that he wanted to win.

The only thing you can say about that is perhaps Russell’s trainer didn’t tell him that he needed the final four rounds to win the fight, so he failed to put in the effort required to win them.

No regrets fighting with injury

“I don’t regret it because I got to show the fans what I could truly do,” said Russell Jr. when asked if he regrets taking the fight with Magsayo with a preexisting injury to his right shoulder.

“I’m a real champion. I don’t regret it. I think there’s going to be a lot of fans that are going to be disappointed over the decision with the way that the judges called this thing.

“It’s also going to be a lot of people saying, ‘Hey, Gary is definitely the truth. I truly believe I won the fight nine rounds to three, ten rounds to two. He couldn’t touch me. The little scars that I have on here were from a head-butt.

“He landed two solid clean shots for real for the entire fight that I could think of,” said Russell Jr. “I outboxed him, outclassed him, and outpointed him the whole way through.

“Healthy, I’m going to beat that a** even worse than I did tonight,” Russell Jr. said when asked what will he do in a rematch with Magsayo. “We’re definitely trying to see if we can get a rematch,” said Russell Jr.

If Russell Jr. is going to fight again, he needs to get treatment for his injured right shoulder. If it’s a tendon issue, as he says, he should consider having surgery if that’s the recommendation from his doctor.

Assuming Russell Jr. chooses the non-surgical method of healing his right shoulder, he could be asking for trouble later on if the problem flares up again.

Considering that this has been a problem for him since his amateur days in the 2008 Olympics, that’s a sign that he needs to follow whatever advice his doctor gives him.

Russell Jr to have shoulder looked at

“Of course, I’m definitely going to get this figured out,” Russell Jr. said of his shoulder problem. “It was an injury that has been haunting me for a long time. Before the Olympics, they wanted me to go and get surgery. I refused to go and get surgery and go under the knife.

“They told me that I would be able to strengthen the muscles around it and protect it. That’s what I was able to do throughout the duration of my career. I hurt it two weeks out from today.

“I can go up [in weight]. I was always saying that I could go up and fluctuate my weight as long as I was able to compete against a champion. Some of the best had adversity. What’s life without adversity?

“The same people I’ve been wanting. Gervonta ‘Tank’ Davis or a rematch with Vasily Lomachenko,” said Russell Jr. when asked who he would want to fight if he moved up in weight to 135. 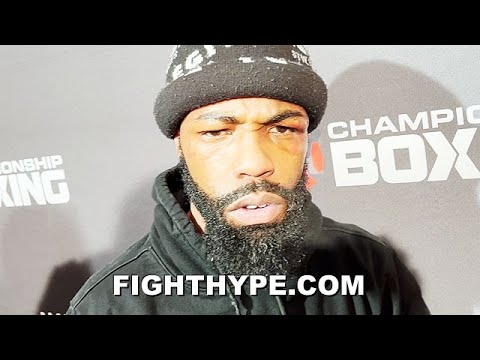 Gary Antuanne Russell vs. Viktor Postol on Feb.26th on Showtime »