It’s unclear what started the argument, but Russell Jr escalated things when he said he was tempted to smack the 25-year-old former WBA interim super featherweight champion Colbert.

Russell (31-2, 18 KOs) is coming off a loss against a very average Mark Magsayo last January. The 34-year-old Russell tried to beat Magsayo while dealing with an injured arm, but he didn’t have enough to deal with the hard-hitting Filipino fighter.

For his part, Colbert (16-1, 6 KOs) is coming off a one-sided 12-round unanimous decision loss to Hector Garcia last February.

Chris Colbert: “I came off the block. Let’s go to the gym and spar whenever. Tonight now, whatever. 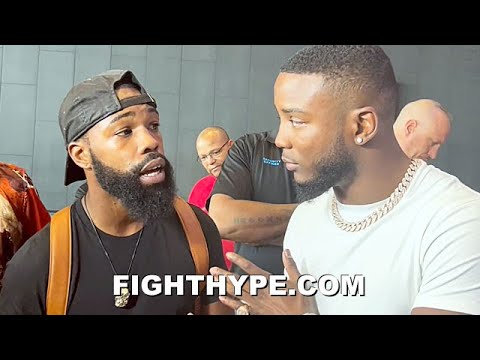 Russell: “Three months since my surgery. I smack a mother f*** right now.”

Colbert: “When you get healthy.”

“I’m wasting time talking about that fight. I resent the contract, but they don’t want to fight. He’s just talking. A lot of these fighters do rapping. I’m coming off a loss, and I’m down to fight the best.

“I’m going up to 135 to fight somebody [Frank Martin] they think I can’t beat, and I’m going to dominate him. Then I’ll come back down to 130 and beat his a** too,” said Colbert about Russell Jr.

“Frank Martin,” said Colbert when asked who he’ll be fighting at 135. “It’s a statement to the world because this is what I do. I’m really this guy. Don’t let this last fight [against Hector Garcia] get these n***** f**** up.

“I want it [rematch with Hector Garcia], of course, but I want it if you get the belt. If you don’t get the belt, it makes no sense then. If I go beat somebody like Gary Russell, that loss gets swept under the rug. They’re going to say, ‘Oh, you were supposed to beat him.’

“I’m here to support Danny [Garcia for his fight against Jose Benavidez Jr on Saturday night]. So that’s why I don’t want this media.”


« Are Unification Bouts Good for Boxing?