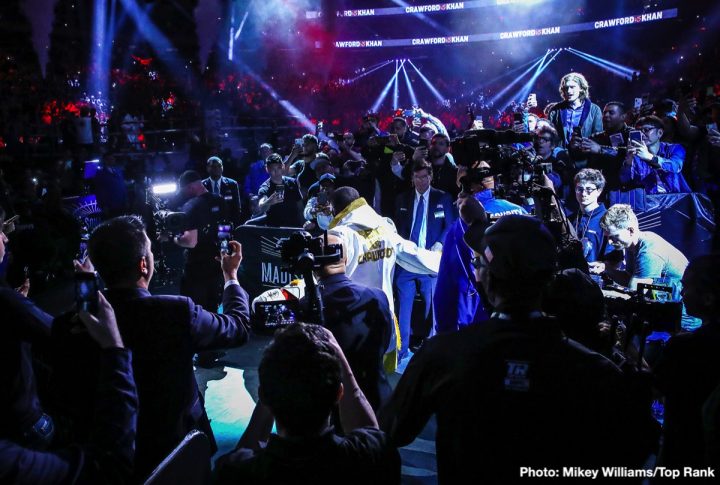 By Mark Eisner: Top Rank promoter Bob Arum insists that a fight between welterweight champions Terence ‘Bud’ Crawford and Errol ‘The Truth’ Spence Jr. can get made for the fall in October or November. Arum sounds confident that Spence Jr. (25-0, 21 KOs) will take the fight. Arum says Spence could be attending tonight’s Top Rank Boxing card headlined fight between WBC super featherweight champion Masayuki Ito vs. Jamel Herring at the Osceola Heritage Park, in Kissimmee, Florida. If Spence shows up for the fight, it’ll give Arum a chance to talk to him about making the Crawford fight in the fall.

Arum states that the Premier Boxing Champions welterweights want to get paid a lot money per fight. However, there are only a limited number of fights that PBC can put on pay-per-view per year. That’s why Arum feels confident that IBF 147-pound champion Spence will want to face unbeaten WBO belt holder Crawford (35-0, 26 KOs) in a unification match this fall in October or November.

Errol Spence Jr. vs. Shawn Porter fight up in the air

Spence, 29, is expected to fight WBC welterweight champion Shawn Porter (30-2-1, 17 KOs) in September, but thus far the match hasn’t been made. There are some who believe that Porter, 31, won’t take the fight unless it’s shown on pay-per-view, and there’s a chance that it won’t be. You can’t blame Porter for not wanting to fight Spence if it’s not PPV, considering that the money won’t be significant. If Spence-Porter isn’t on PPV, Porter would be better off defending his World Boxing Council welterweight title against one of the contenders in the WBC’s top 15 like Jessie Vargas, David Avanesyan, Jeff Horn or Kerman Lejarraga.

“Terence Crawford is going to fight in October or November, and I’m still optimistic we can get a fight done with [Errol] Spence,” Arum said to J Calderon Boxing Talk. “Spence, I think, is coming to the [Masayuki Ito vs. Jamel Herring] fight [tonight in Kissimmee, Florida]. He’s a great fighter. That’s the fight that people want to see, Spence and Crawford. It’s more a Leonard vs. Hearns, because they fought at welterweight. That’s a possibility [Crawford vs. Spence in October]. Also [Crawford vs. Kell Brook]. He says he can [make 147],” Arum said about Kell Brook being confident of being able to get back down to the welterweight limit for a fight against Crawford in the fall.

If Spence’s chance for a big payday is a unification fight against Crawford this year on ESPN pay-per-view, then it would be hard for him to resist taking that fight. Spence will need to make up his mind whether he wants to take a smaller payday against one of the contenders if the unification match against Porter doesn’t get made. Right now, it’s not looking good for the Spence-Porter fight. If PBC wants to put the fight on non-PPV, it’s going to cost a lot of money to keep them happen. It’s a risky fight for Porter, as he’s getting up there in age at 31, and he’s starting to show a lot of cracks in his facade. Porter struggled in his last fight against Yordenis Ugas on March 9, and was lucky to win a 12 round split decision. The boxing fans thought Porter overwhelmingly should have lost that fight. As such, if Spence-Porter doesn’t wind up on pay-per-view, it’s not a good deal for Porter. For him, this might be the end of the line for him as far as being a world champion. Porter was in the right place at the right time to fight Danny Garcia for the WBC title instead of one of the talented welterweights like Spence or Crawford. If Porter loses the WBC belt to Spence, he might be too old and passed it for him to win another world title. Ugas appears to have Porter’s number, and you can bet that Crawford, Keith Thurman and Spence would have an easy time beating him as well.

Arum counting on making Spence vs. Crawford in fall

“Hopefully it’ll be Spence against Crawford in the fall,” Arum said. That’s the fight that should happen. Don’t jump to conclusions. You’ve got to understand a lot of these fights are pay-per-view fights, and the fighters want to get paid a lot of money,” Arum said in response to the interviewer saying that Spence might decide to take part in a Premier Boxing Champions welterweight tournament against PBC guys. “So, that means that PBC has to go deep into their pockets to do those fights, and there are a limited number of fights they can do. You can’t put all those fights on pay-per-view,” Arum said.

Money talks when making big fights. Arum has the perfect lure to get Spence to agree to a fight against Crawford by putting the fight on ESPN PPV. Spence vs. Crawford will good money, and a rematch will likely make even more money.

Can Golden Boy make Canelo vs. Spence for September?

What could potentially get in the way of a Crawford vs. Spence fight taking place this fall is Golden Boy Promotions. Oscar De La Hoya has talked about wanting to make a fight between Saul Canelo Alvarez and Spence this year. There are rumors of Spence getting $20 million for a fight with Canelo. That number would certainly be difficult for Arum to top for a fight between Spence and Crawford. If Golden Boy Promotions boss De La Hoya is serious about wanting to put together a fight between Canelo and Spence, it’s going to be hard for Arum to compete with that to put together a Spence-Crawford fight for the fall.