Russell Jr. vs. Magsayo: “They Robbed Gary, he beat him with one hand,” says Bozy Ennis

Bozy feels that Russell Jr. (31-2, 18 KOs) beat Magsayo, 26, with just his left hand, landing the cleaner shots despite dealing with a right shoulder injury from the fourth round.

As far as Bozy is concerned, Russell Jr. deserved to win 10-2 or 9-3, seeing that he only gave the Filipino fighter Magsayo the first two or three rounds before Gary figured him out and took over completely.

What made it easier for Russell Jr. to dominate using only his left hand was how Magsayo faded after the first three rounds. He looked tired d and wasn’t throwing shots the way he needed to for him to win rounds.

Russell was firing combinations using only his left hand from the fifth round on. I mean, he stopped throwing right-hand jabs after Magsayo landed a hard shot on his previously injured shoulder.

Team Magsayo likely knew ahead of time about Russell Jr’s injured right shoulder because the Filipino fighter appeared to be aiming his punches in that area.

Whether Team Magsayo had a MOLE in Russell Jr’s camp or they figured out the injury from watching his body language in the lead up to the fight is unknown. Whatever the case, Magsayo was tagging Russell Jr’s right shoulder before and after the injury occurred in the fourth.

Gary was “robbed”  by the judges

“His shoulder was messed up, and I went over there and told his brother just now that they were going to rob him,” said Ennis about how he predicted that Russell Jr. was going to be robbed by the judges before the results were announced last Saturday night in Atlantic City.

“That’s what it’s all about,” said Ennis when asked if this was an example of ‘the business of boxing.’ “I don’t know why they’re doing it to him like that.

“He put on a beautiful display of boxing, man. I gave Gary seven rounds. Seven to five, something like that. I could have given him a little bit more than that, though, because in the first couple of rounds, to me, I could give him two or three rounds,” said Ennis on his view that the only rounds Magsayo won were the first two or three.

“All the rest of the rounds, I believe Gary won. Yeah, he did it,” said Bozy on Russell Jr. dominating the last nine or ten rounds using just his left hand.

Chris Williams had a suspicion that Russell Jr. would lose a controversial decision during the week of the fight.

With all the praise that Magsayo was getting from the media, it seemed apparent that he would be given the decision.

If Russell Jr. and his team had their eyes open, they should have known going into the match that they needed a knockout to win.

Bozy: Russell Jr. beat him  with one hand

“He was proving himself to everybody. I’d like to see a rematch when he has both hands,” said Bozy on wanting to see Russell Jr. get a chance for a  rematch when his right shoulder is 100%.

“He beat him with one hand. Just imagine what he would do if he had both hands—his shoulder. When I looked in his corner, I already knew because he was using only one hand. He didn’t use nothing else.

“I thought my brother did enough to win. I thought he landed the cleaner shots,”  said Gary Antonio Russell to YSM Sports Media about him believing that his brother Russell Jr. deserved the win.

“He threw less.  So, I don’t know if that’s what the judges were looking at overall, but I felt like he gave that guy a boxing lesson. I feel like I could give Mark two or three rounds tops.

“In my opinion, I think Gary easily won the fight. If elt like he outclassed Mark. It was a shoulder injury. He said he hurt it in camp, a sparring injury.

“G is a dog. He’s a man. He tells me that he feels that the sport is being watered down with a lot of bi*** or a lot of female traits in the sport. People are not willing to fight the best, and at any opportunity, they pull out of fights.

“He said he felt that he had enough to beat this boy with one hand. In my honest opinion, hell no,” said Gary Antonio when asked if we can see a rematch between Magsayo and Russell Jr.

Russell Jr. dominated Magsayo with just his left, making him miss and picking him off with beautiful counter shots the entire fight.

“I don’t think they’ll [Team Magsayo] be in a rush to get back in there with G if his shoulder is back,” said Gary Antonio on doubting Russell Jr. will get a rematch anytime soon. 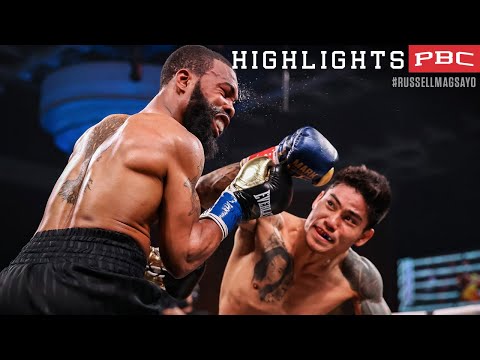 “My brother didn’t throw as many punches, but I feel like landed way more than Mark. It was. It was so much more cleaner.

“I honestly don’t know what to say. I was surprised. I’ve seen robberies like this in the amateurs and some in the pros. We’ll see what happens,” said Gary Antonio.

The only problem with that is Magsayo will likely lose his WBC title in his first defense because he’s a shaky fighter.