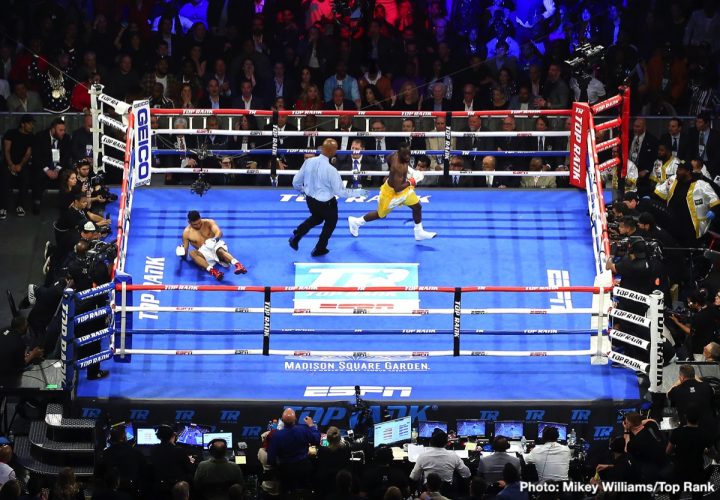 By Sean Jones: Amir Khan’s trainer Virgil Hunter says his decision to have his fight with WBO welterweight champion Terence Crawford (35-0, 26 KOs) stopped in the sixth round last Saturday night was a result of Amir having been “incapacitated” by a low blow from the Top Rank fighter. Hunter states that Khan was hurt enough for the fight to be stopped, so he did what he felt he had to do in pulling him out.

It was Khan’s trainer Hunter that made the decision to have it stopped, and that was based on his conversation with Khan after he got back up from the low blow. It’s too bad there wasn’t a microphone handy that could pick up the conversation from Khan and Hunter after the low blow in the sixth. That would have been interesting for boxing fans to hear what was being said between Khan and Hunter. The fans could then draw their own conclusion whether Khan quit or not. It seems pretty clear from what Hunter is saying, he made the call to have the match stopped after Khan told him he was hurt from the low blow.

Hunter remarks that he had a brief conversation with Khan moments after he was hit with a hard low blow from Crawford in round 6. During that conversation, Khan indicated to him that his legs were gone. Hunter felt that Khan was not going to be able to come back from the low blow, so he had the referee David Fields stop the fight. The match was then waived off officially at 0:47 of round six last Saturday night at Madison Square Garden in New York.

“He indicated to me that he was hit in the testicles, and it took the life out of him, so I have to take his word for it,” Khan’s trainer Virgil Hunter said immediately after last Saturday’s Crawford-Khan fight at Madison Square Garden in New York City. “Sometimes punches will do that. That’s not taking anything away from Crawford’s success in the fight. I don’t think he [Khan] was looking for a way out of the fight. He was having some success coming back in the fight. It looked like he started picking up on Crawford’s rhythm,” Hunter said.

Khan telling Hunter that the low blow from Crawford had taken “life out of him” is obviously the trainer’s rationale for pulling him out. Hunter says he took Khan at his word that he was hurt, which is why he quickly reached the conclusion to have the bout stopped. Would 5 minutes have been enough for Khan to recover? The fans would have liked to have seen Khan at least try and continue fighting after waiting 5 minutes, but it wasn’t his call. Trainers are there to protect their fighters, and that’s what Hunter thought he was doing by letting the referee know Khan was too hurt to continue.

“We don’t know what the outcome would have been had he still stayed with it, but he indicated it was a bad shot,” Hunter said in continuing to talk about the low blow incident involving Crawford and Khan. “We had to make him more defensive. I told him not to take any chances, but it was hard to stop him from taking chances. He got careless and he got caught, but he survived one round, and he was never in that kind of trouble again,” Hunter said about Khan getting hurt in round one by a right hand from Crawford.

Crawford landed a nice right hand that put Khan down in the early moments of round 1. Khan was reeling after that shot, and he never did get into the fight. He was too aggressive right off the bat against the highly skilled Crawford, a fighter that thrives on taking advantage of his opponent’s mistakes.

“Although Crawford had some big moments, he was kind of picking up on his rhythm,” Hunter said. “As I was saying, sometimes a low blow can incapacitate you. You give them five minutes, but there’s been scientific about how a low blow can really incapacitate a person. So he said he had no legs. Amir has never indicated or shown in his career that he’ll quit. So I have to take his word for it,” Hunter said.

What further makes some boxing fans believe that Khan, 32, flat out quit was the fact that he failed to call for a rematch afterwards when he was being interviewed inside the ring, and at the post-fight news conference. Khan had the opportunity right then to ask Crawford point blank for a rematch, but he never did. The only thing Khan did was say that he’s not a quitter, and compliment Crawford for having beaten him. If Khan wanted a rematch, he could have asked Crawford on the spot. Crawford probably would have said no, but at least Khan could have made it clear to the fans that he thought the low blow kept him from beating Terence.

“The main thing is to get him healthy,” Hunter said. “He’s been dealing with some injuries that he had to deal with. The right elbow. So I think he has to get healthy. He has to reassess his career. He didn’t do bad. He didn’t do bad tonight. He got up from the punch. He survived the punch. he was never in that kind of danger again. I think he has to reassess the situation and go from there,” Hunter said about Khan.

What a lot of people are failing to take notice of was how well Khan was coming on at the end of the fight. He was starting to get into his rhythm in rounds 5 and 6, and looking like he had figured out Crawford’s tricky style. Khan was no longer looking confused like he had in the first 4 rounds of the fight, and he was making him pay for his shots. Khan didn’t get a lot of credit by fans for the success that he was having at the end of the fight. The fans were more focused on the outcome rather than what was happening moments before the match was halted.


« Atlas: Crawford vs. Khan was NOT good for boxing