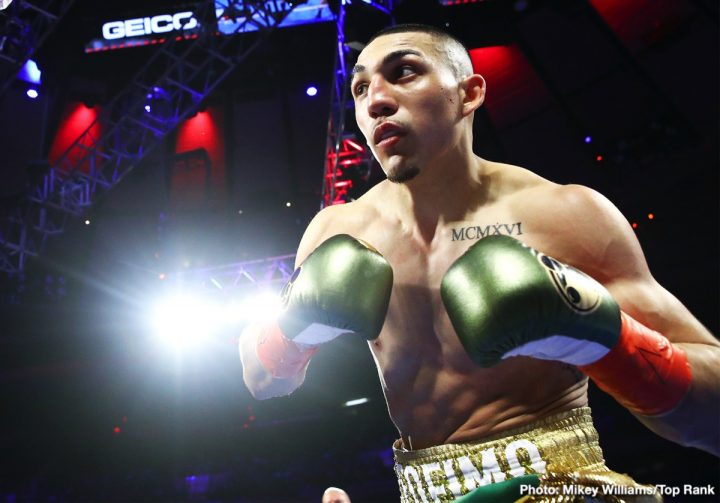 Lopez dropped Tatli with long right hand to the midsection in the fifth round. Tatli was in too much pain to get up from the knockdown. The fight was then stopped by referee Ron Lipton. The time of the stoppage was at 1:32 of round five. After the fight was over, Lopez performed his customary back flip to celebrate his win.

Fighting in the co-feature bout on the Terence Crawford vs. Amir Khan card on ESPN PPV, this was the 21-year-old Teofimo’s time to shine against a quality opponent in 31-year-old Tatli, and he took full advantage of it in using his size, power and youth to dominate his weaker foe. Tatli fought well on defense, but he was unable to muster any real offense on his own to be competitive in the fight.

Lopez looked kind of sluggish at times, perhaps due to his struggles to make weight. The day before last Friday’s weigh-in, he was still seven pounds over the 135 lb limit at 142 lbs. That’s A LOT of weight to lose the day before a fight, but it’s perhaps to nowhere close to where Lopez was after he rehydrated for last night’s contest. Lopez looked like he was in the low 150s, which is huge for a lightweight. Lopez looked like a short 154 lb junior middleweight against Tatli, who didn’t have near the same size to compete with him.

The way that Lopez fought in beating a good contender in Tatli could result in the Brooklyn native headlining his own cards in the future. Lopez has already won a lot of new boxing fans with his impressive performances. Lopez wants to challenge WBA/WBO lightweight champion Vasiliy Lomachenko (13-1, 10 KOs) before the end of 2019, but he might have to wait until early 2020 before their mutual promoters at Top Rank decide to let that fight happen. Top Rank wants to have Lomachenko capture the IBF and WBC titles before they make the fight between him and Lopez. There’s a also a possibility that Teofinmo could challenge for the IBF title against champion Richard Commey this summer, but that’s unlikely to happen. Lomachenko wants Commey, and Top Rank isn’t going to upset their young star.

“I called it, I said it’s not going past six and that it would be a body shot. That’s what happened,” Teofimo Lopez said about his knockout win over the 5’9″ Tatli.

Lopez had to concentrate on throwing body shots, because he was having no luck in landing to the head of Tatli. When Lopez would go upstairs with his punches, Tatli would expertly duck or block them. The defensive skills of Tatli were quite good, better than Lopez’s. What Tatli didn’t possess was the weight and the power that Lopez had going for him.

“I want a world title shot next. That’s what I want. We promised to take over the show, and once again, I took it over,” Lopez said.

Teofimo didn’t specifically call out Lomachenko, but it’s pretty clear that’s the guy he wants to fight. IBF champion Richard Commey is a possibility for July. Lopez was saying that his fight with Tatli might be an International Boxing Federation title eliminator. Not much was said about that last night, so it not have been after all. Never the less, Top Rank can get Teofimo a fight against Commey if they want to. All they need to do is throw some money at Commey, and he’ll gladly take it. However, he would likely prefer to face Lomachenko, 31, because that’s the bigger fight for him. If Lomachenko has anything to say about it, HE’LL be the one that winds up facing IBF champion Commey instead of Teofimo. If Lomachenko takes the Commey fight, he’ll leave Teofimo out in the cold, and be able to use his lack of a world title as an excuse for him not needing to fight him.

Featherweight Shakur Stevenson (11-0, 6 KOs) dominated Christopher “Pitufo” Diaz (24-2, 16 KOs) in beating him by a 10 round unanimous decision. The 2016 Olympic Silver medalist Stevenson couldn’t hurt Diaz, but he out-boxed him easily in winning by the scores 100-90, 99-91, and 98-92. Stevenson likely will never be much of a puncher, but right now at this level, it doesn’t matter yet. It will start mattering when Stevenson needs to beat the harder punchers. Having to go 12 rounds with a hard puncher like Oscar Valdez or Gary Russell Jr. is a hard proposition, no matter how good of a boxer Stevenson is. It’ll be bad news for Stevenson if he gets hit for 12 rounds by Valdez or Russell Jr.