Atlas: Crawford vs. Khan was NOT good for boxing 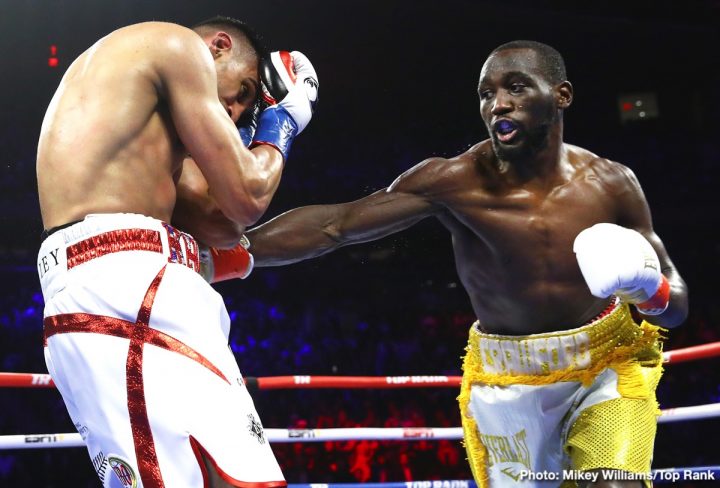 By Jeff Aranow: ESPN analyst Teddy Atlas is one of many boxing fans that felt that the ending of last Saturday’ night’s fight between WBO welterweight champion Terence Crawford (35-0, 26 KOs) and Amir Khan (33-5, 20 KOs) wasn’t good good for the sport or for pay-per-view in general.

Crawford-Khan went for $70 on ESPN PPV and the boxing fans were hoping to see a great fight. What they saw instead was Crawford hitting Khan with a low blow in the sixth round, and the fight being stopped moments later after Khan was pulled out of the fight by his trainer. As such, the fight failed to play out to the logical end, which would have likely seen the #2 pound-for-pound star Crawford score a knockout of former IBF/WBA light welterweight champion Khan. Crawford NEEDED a resounding victory over the popular Khan to take his career to the next level, but the way the contest ended with a low blow, robbed him of the ability to make that happen. It also upset a lot of fans, who might be reluctant to purchase EXPENSIVE pay-per-view fights in the future, be it on ESPN, FOX or Showtime.

With Top Rank Boxing choosing to match Crawford against a FADED fighter in Khan, who has a history of being knocked out and who has been largely a part time fighter in the last five years of his career since 2014, was asking for trouble. It was a questionable from the get go for Top Rank to match an elite fighter like Crawford against Khan, and then put the fight on ESPN pay-per-view instead of on regular, non-PPV ESPN. Top Rank took a big gamble in matching Crawford against a flawed, faded fighter with a history of imploding during big events, and that gamble blew up in their face.

The end result of Top Rank’s decision to match Crawford against a guy with a shaky past in Khan, and then putting it on ESPN PPV for $70, it was a fight that had a HIGH probability of failure. There are certain fighters that are worth a promotional company matching their elite level guys against in expensive pay-per-view events, but there are others where you need to be smart and avoid using them. Someone like Shawn Porter would have been perfect for Crawford to fight on PPV, as he gives it his all each time out.

Top Rank using Khan for a pay-per-view fight against a counter puncher like Crawford was them asking for trouble. Again, this wouldn’t have been as bad if Top Rank had put the Crawford vs. Khan fight on FREE television on regular ESPN, but putting it on pay-per-view was a goofy decision that ended badly. Some boxing fans say that Top Rank got greedy by putting together a HORRIBLE mismatch between Crawford and the over-the-hill Khan and putting it on ESPN pay-per-view. It’s important for promoters to think hard before they make PPV fights, because they could be shooting themselves in the foot and hurting the industry by putting together poor fights like last night’s Crawford-Khan match. The moment the Crawford vs. Khan fight was made, many fans were already predicting a poor outcome, and sure enough, that’s what happened.

“$5 million! Part of your responsibility is to overcome. They did not live up to that responsibility,” Atlas said. “Again, for you people out there that want to jump and hate. Listen, I’m not in his body. I get it. I’ve been in this business 40 years. I’ve seen fighters overcome worse than that.”

It didn’t look like Khan was going to be able to “overcome,” as Atlas says. The $5 million that Khan received for the fight doesn’t mean that he should stay in there and take a beating if he had tried everything he could to “overcome” his dire situation. Khan tried to box, slug and use movement against Crawford. None of it worked. Khan was using different strategies to overcome, but Crawford dealt with everything that he did.

If Khan was truly as hurt as he looked, then you can’t blame his trainer Virgil Hunter for pulling him out. The fight was going badly or Khan at the time. He was getting dominated by Crawford in a one-sided manner. It was pointless for Khan to continue fighting given how much punishment he was taking. The low blow in the sixth was obviously a situation where it was clear the fight needed to be stopped, and his trainer Hunter did what he thought was the smart thing to get his guy out of there before he took a needless beating. If the shoe was on the other foot, and Crawford was getting pummeled by Khan, would his trainer pull him out? It’s possible that he would. If it’s not competitive, then why let the fight continue?

“Now am I saying that he has the threshold, he has the capacity to overcome that? Obviously not, or maybe not the mindset,” Atlas said about Khan. “He made $6 million to fight [Saul] Canelo. He’s a better manager and promoter and money-maker than he is a fighter at this point in his career. He knows how to put himself in position to make money, and he has made money, but again, at the peril of the audience who pays for that money,” Atlas said.

Khan admitted afterwards that he never recovered from being dropped in round one by a big right hand shot from Crawford. You’ve got to give Khan credit or being able to still fight after he was badly buzzed in the first round. Khan was trying to fight Crawford off from that point on, and just taking bad punishment to the head and body.


« Crawford/Khan: What we really learned