By Aragon Garcia: Trainer Robert Garcia thinks that the training team that was helping Marcos Maidana prepare for his comeback bid hurried him by moving far too rapidly with their grueling training regimen to take the weight off for the 35-year-old former two division world champion’s fight in June.

With approximately 40 lbs of weight still needing to be trimmed off, Maidana (35-5, 31 KOs) gave up on his comeback bid by choosing to quit this week, and go back home to Argentina without resuming his career. By ending his comeback bid, Maidana is walking away from a three-fight contract with PBC that would have paid him a ton of money.

Robert Garcia thinks they should have taken it slowly with Maidana, and had him drop the entire 80 lbs over a one-year period instead of taking it all off in just 4 months. It’s insane to even consider a professional athlete taking off 80 pounds in four months, and then competing in their profession. For Maidana to be asked to return that quickly, it was too much, too soon, and a plan that was doomed for failure. It’s not surprising that Maidana quit.

Maidana had been retired for five years since 2014, and he’d gained a lot of weight in those years. With the help of strength & conditioning guru, Maidana lost 40 pounds in just six weeks. The diet and the exercises that Maidana had to undertake to lose the weight rapidly was clearly a grueling affair. But after losing 40 lbs, Maidana still had another 20 to 30 lbs to lose, and he wasn’t up to the task, and he ended up quitting this week.

“I think they were pushing him a little bit too hard,” Robert said to Fighthub about the training team that was helping Maidana lose weight to return to the ring. “For a fighter to be out for five years and then to come back and three, four months later they want him to fight at 160? I would guess he was probably 80lbs [overweight], so he lost the first 40 and he still has another 40 and they’re pushing him, they’re pushing him.”

It was WAY too much weight for Maidana to lose and then get back in the ring. Maidana was going through what bascially was a prolonged boot camp of sorts, but unlike the young 18-year-old teenagers that join the military, Maidana was extremely overweight, and not young at 35. He was being asked to do what a young person wouldn’t be able to accomplish. Besides the weight and his advanced age, what made it even harder for Maidana was the fact that he’d had a taste of the soft life for five years. Maidana had been eating the best food, enjoying the finest quality drink, and lived like a king in Argentina. It was a life that most of us could only dream of living. To let go all that to come to the U.S to deny his body these creature comforts that it’s accustomed to, it had to have pure living agony for Maidana to deal with.

You’ve got to give Maidana credit for making it this far to lose 40 lbs, because a lot of people would have quit straightaway rather than endure the agony of agonies of what Maidana had to go through the massive amount of weight in such a rapid manner. At some point, Maidana should have gone back to his promoters and told them that he needs to be able to take the weight off slower so that he doesn’t wind up a zombie by the time he’s done taking it off. He didn’t do that unfortunately.

Maidana stuck it out until he his body and clearly his mind could no take it, and he ended up quitting. One can second guess Maidana and say that he should have been assertive with his management, and told them that he needed more time to lose the 80 lbs of fat that had to trim off his frame. A more reasonable weight loss schedule would have been for Maidana to lost approximately 6.5 lbs per month for an entire 12 month period to lose the 80 lbs of fat that he needed to drop. That would have been a sensible approach to losing the weight instead of trying to lose it all in 4 months.

“In order for a person to lose 80 pounds in four months, that’s ridiculous,” Garcia said. “40 lbs is a lot. I think they were thinking, ‘oh, you’re going to fight in June, again September, and one more time before the end of the year.’ So they wanted to f—– make him fight three times and lose 80 lbs. It’s ridiculous, so they killed him. They killed him. They pushed, they killed him too fast, and burned him out. He’s like,‘f— this. I don’t need this.’ His body gave up,” Robert Garcia said about Maidana.

To have Maidana return to the ring in June, and then possibly fight in September and then December, it was schedule that was too advanced for a guy that had been out of the ring for five years. That alone was asking for trouble. But then when you add all that weight that Maidana had to take off for him fight three times, it was too many things in such a short period of time.

It would be great if Premier Boxing Champions can talk Maidana into resuming his comeback bid, but giving him more time to take the weight off. Whether Maidana resumes his career in late 2019 or early 2020, it shouldn’t matter. Nothing is going to change in six to eight months. The Adrien Broner and Manny Pacquiao fights will still be there for Maidana in 2020. There’s no rush in Maidana taking off a massive amount of weight to get those fights this year. He needs to take the weight off in a logical way that doesn’t physically and mentally break him down to the point where he take it any longer.

“You know, the first 40 lbs, okay; Not easy but he lost the first 40,” Robert Garcia said about Maidana. “But then he’s thinking, ‘F—, I’ve still got 40 more? And look at all this s— I’m going through.’ I think it should’ve been slowly, Slowly, slowly. One year, it would’ve taken one year for him to lose all that weight,” Garcia said. 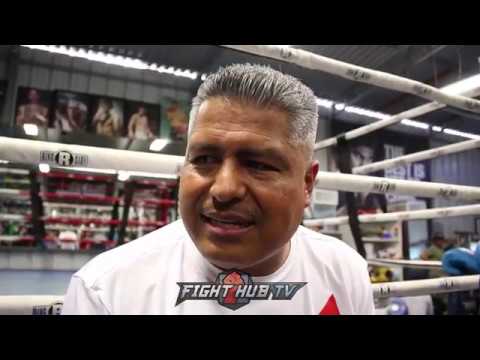